Rihanna Will Be Co-Hosting The MET Gala | The Mary Sue 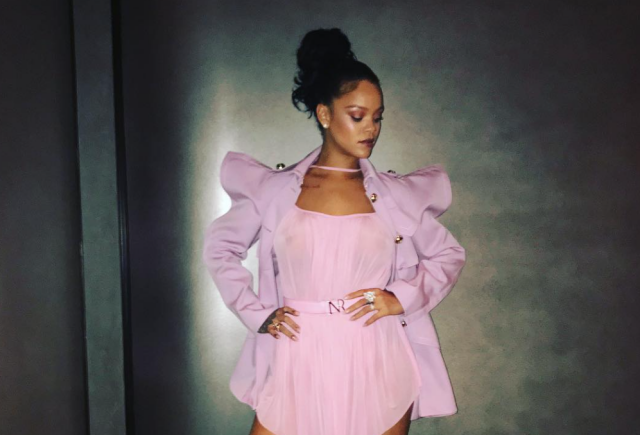 2017 should be known as the year Rihanna took over beauty culture and slayed. It was announced earlier today by Vogue that the theme of the 2018 MET Gala would be “Heavenly Bodies: Fashion and the Catholic Imagination,” and BadGal RiRi herself would be a co-host of the event. Which makes perfect sense, because her looks at the previous MET Galas have all rocked and showing off both the theme and an impressive sense of imagination. Plus, she is an actual heavenly body.

Rihanna doesn’t just wear clothes, she creates looks. Something will seem silly on one person, but on Rihanna, it belongs on the runaway. It’s part of her glamour as one of the most creative and approachable stars in music. Yes, Beyonce is the Queen, but Rihanna is an Ambassador. Just human enough to relate to, but also too glamorous for the average person.

It isn’t just fashion. Since launching her inclusive and pretty affordable high-end makeup line, “Fenty” (name coming from her own last name Robyn Rihanna Fenty), her profits have risen. Just one month after being released, the line was worth $75 Million Dollars. In an interview with InStyle, she said, “I wanted to do a line for years, but it needed to be credible, something that industry pros and girls around the world would respect.” And so it was.

Rihanna has given us look goals and summer bops, even if the Grammys have remained shady and not properly given Rihanna her due. Yet, Rihanna’s success in all of these avenues of music, fashion, and even acting (easily the highlight of Valerian), is a testament to her and her creativity. Rihanna came on the scene as a “pop princess” back in 2005, but since taking creative control of her music in 2007 with “Good Girl Gone Bad” she has owned her own image as a sexual, unapologetic black woman for a decade.

Even after her domestic abuse experience, she did not let that stop her from being a sexual person, something that confused mainstream media, but shows just how clear Rihanna’s sense of self is. She doesn’t want to be defined by how she should act or what is expected of her. Rihanna doesn’t care what you think about her hairstyles, her tattoos, her fashion, or her weight (y’all really tried it with that one) and that is what makes her such an icon not just to her fans, but black women everywhere. She is the everywomen celebrity of black culture and that has been rewarded: the proof is in the net worth.

The official day of the Gala will be April 30, 2018, along with Rihanna the other co-hosts will be Amal Clooney, and Donatella Versace.