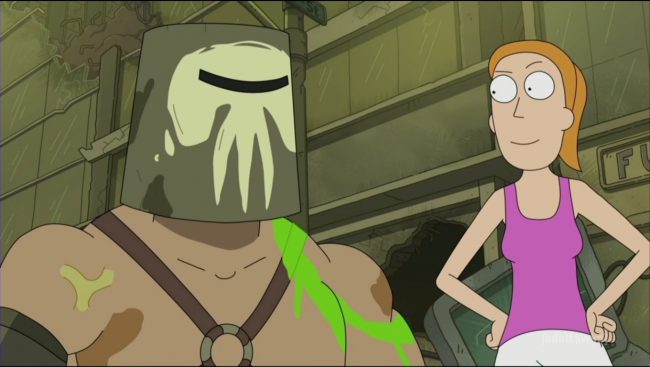 The Recap: Summer and Morty follow Rick to a Mad Max-esque wasteland to avoid dealing with their parents’ divorce. Summer joins a gang, Morty makes a friend in an unexpected place, and Rick is just there for a useful isotope.

R&M’s decision to add women to its writing staff this season has been the subject of much press attention (better late than never, I suppose), but I look forward to discussing not just their existence but how much they’ve already brought to the table. In my recap of the premiere several weeks ago, I mentioned that the show might run into trouble if the audience gets burned out on Rick’s ever-in-question empathy. Jane Becker’s answer to this in “Rickmancing the Stone” is to mostly sideline Rick in favor of dialing in on his grandkids.

It’s a smart move. Summer and Morty have each picked up more than a few Rick-like traits at this point, but they’re also still unjaded enough that they can invest in relationships without a filter of controlled substances or ironic detachment. Rick, by contrast, is used as a destabilizing influence; his selfishness and does-he-or-doesn’t-he-care elements are easier to take when they’re not the main emotional hook, and the show can both indulge that question and kick it down the road without being too frustrating.

The B-plot uses the implant of a literal muscle-memory to explore Morty’s tendency to snap and turn to violence when he’s under stress. It’s a thin plot, since Morty is being dragged around passively for the first half, but that leaves it with enough flexibility to take some pleasantly weird and surreal turns, ending on a note that’s tender and then very quickly quite bleak—keeping in line with the show’s fondness for traumatizing the kid without necessarily undoing the moment of emotional closure that came before it.

Summer gets the most to do here, and proactively at that. “Summer gets left behind and becomes a combat-hardened killer” is probably a familiar arc to anyone who read the R&M comic, but that’s not necessarily a mark against it in the show—the comic has a much smaller audience, after all, and it’s a sensible outgrowth of Summer’s cold pragmatism. The only concern would be if that’s the only well the writers decide to return to for her character. Morty’s traumatization might be a running … gag? … motif? But he’s gotten to shine in a variety of situations. Since Summer is still a fairly new addition to the adventure plots, I’m not worried.

Her arc also centers the most around the script’s Mad Max rifts, which exist in a weird space after the boom of Fury Road homages but before the franchise has fully sunk back into its former place of “obscure genre film references.” R&M draws from big names in SFF, so it’s inevitable that some references are going to feel less sharp, and to its credit, the setting serves the character arcs well enough that it never becomes obnoxious. Rather, it’s serviceable in a show that has been known to excel in the creation of its alternate universes (but then, farting butt verse; maybe the whole argument is moot).

The only one who gets the short end of the stick here is Beth, who is at this point completely being led by the nose even in the face of Rick’s paper-thin schemes. Her character has gotten even less exploration than Jerry’s—even Jerry has a moment of closure at the end of the episode, in probably his most sympathetic scene since Doofus Rick was around—and as everyone else gets to stretch into new character roles her stasis feels even more obvious. But … well, that could change any time.

I’ve spent a lot of this review couching my critiques, because R&M is at once a densely written show and one that winds up with oversights in unexpected places. Beth’s obliviousness could be the prelude to her snapping and asserting herself, which might be one of the last things that can affect Rick’s behavior; it could turn out to be a long con a la Venture Bros., and we won’t hear about these things until a decade from now; or it could just be a dropped ball, glossed over because the writers were more interested in other things. For now, Beth’s ignorance isn’t so much funny as necessary for the plot to go on working. Functional, rather than exceptional. And “just okay” stands out when you’ve set the bar so high.

The first half of a R&M season is usually setup and episodic adventures, so it’s arguably early to be calling any of this. Maybe I’m just so high on the success of the last two episodes that I’m waiting for the other shoe to drop. Here’s hoping the show’s optimistic nihilism proves my cynicism wrong.

Vrai is a queer author and pop culture blogger; they were excited to see a hero anime, too. You can read more essays and find out about their fiction at Fashionable Tinfoil Accessories, listen to them podcasting on Soundcloud, support their work via Patreon or PayPal, or remind them of the existence of Tweets.