Just look at the flowers, Fart. 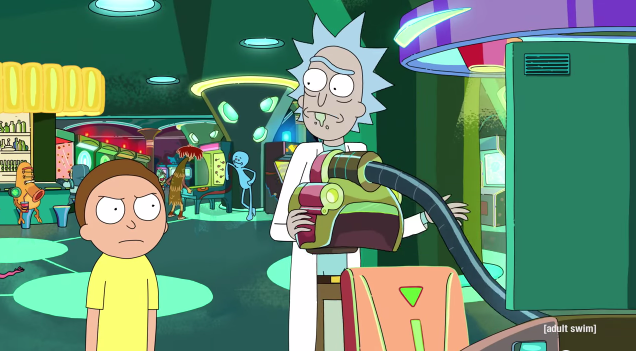 The Recap: Morty’s moral compass is rankled after watching Rick sell weaponry to alien mercenary Krombopulos Michael. Not content to spend the money at the intergalactic arcade, Morty takes it on himself to first stop the assassination and then rescue Michael’s target, ending up in a cross-space chase with the law.

It’s official. If you’re ever feeling particularly crushed by the universe just look in a mirror and remind yourself, “at least I’m not Morty Smith.”

The animation for this season continues to be high-quality stuff, taking full advantage of those simple character designs to play fast and loose with form, line, and composition (not to mention how well those super-neon colors lend themselves to distinct, memorable environments). The highlight is Fart and Morty’s psychedelic trip through well-masked genocidal ideology – and if there’s anything that could make me appreciate a solid ten minutes of fart joke riffs, it’s the unbound madness the visuals commit to during that whole Moon Men bit – but the whole episode crams and amazing amount of detail on screen without feeling overwhelming, and smartly breaks it up with those space sequences to give the intense color palette a rest.

As with last week, Jerry steps just a bit more into the realm of a sympathetic character. As much as we would all like to be Rick on these adventures (or Summer at least), no doubt we all fear we’d end up being Jerry. And that sentiment is tied up in the episode’s interesting subtextual examination of how Rick sees the world, which spends most of the episode pinging back and forth and doesn’t so much settle as it lurks, ultimately unaddressed like that no doubt gamey final fart joke. On the one hand, Rick doesn’t even bother explaining what’s going on to Jerry; on the other, he is totally right about Jerry being too hapless to survive a literally five minutes outside of the daycare. Morty does the final crumbling bit of damage to the spaceship; but it’s much worse than it might’ve been, because Rick hasn’t been taking care of the craft over the years. Rick keeps harping on all that collateral damage, yet at the same time (once it’s no longer an inconvenience) seems genuinely jazzed that Morty’s “saving” someone. On and on, back and forth, and it keeps the writing lively and tense in a way one rarely sees outside of a full ensemble cast. I don’t know how sustainable in the long term it’ll be to have every major character essentially revolve and develop in regards to their relationship with Rick, but for now it’s fascinating stuff (and even the show comments on this fact, with all those Rick-and-Mortyless Jerrys, abandoned as having no purpose).

We’ve seen a heavy emphasis in these first two episodes on testing the parameters of Rick’s morality (such as it is) – how his actions might be justified or not in the present, and (by inference) how those views might’ve come to exist in the first place. And the latter, so far, has come by Morty being given the opportunity to more or less repeat what could easily have been Rick’s mistakes – both a clever get-around to the loaded narrative gamble of trying to “explain” Rick and a solid (if devastating) character arc for Morty.

The show is currently holding onto a very precarious balancing act: Morty knows little enough that we’re still learning along with him, and it continues to be painful for us and him to suffer these horrific realizations; meanwhile, as much as Rick’s view of the universe seems to thusfar be the “correct” one, Rick himself has shown without a doubt that there is a line he will not cross regarding family members (the Jerryboree form is one of my favorite visual gags of the episode, and the check box for “Earth Under Siege” seems to suggest even Jerry gets grandfathered in, as it were, to Rick’s protection).

But sooner or later, in the next season if not this one, that balance is going to have to shift. Or, as it’s so neatly personified by the “Roy” segment, is Rick winning this game because he’s right, or because Morty hasn’t figured out the rules yet? Do the rules of the show’s multiverse necessitate a completely relativistic (or nigh solipsistic, in Rick’s case) viewpoint? Was Fart being kept because of his ability to convert matter, or because somebody else had figured out the whole “universe eradication” plan? Is Morty doomed to become Rick, or is his arc taking him down the same path as the Morty from “Something Ricked?” And while we’re throwing out questions that won’t possibly be answered in the near future, is “C-137” the universe Rick started season 1 in, the one he’s currently hiding out in, or another one altogether?

At the end of the day, this is arguably a retread of “Meseeks and Destroy”: Morty wants to take charge of an adventure, and Rick has to bail him out. But if that is true on the most brass tacks level, then it’s equally the case that the script makes brilliant use of that comparison. Though it’s “only” been 7 episodes since then, Morty’s stance has gone from trying to prove himself to Rick to trying to do what he thinks is right without Rick. And Rick himself is simultaneously more vocal about how he’d rather be anywhere else and yet much more hands on, hinting at the higher stakes of what he’s allowed Morty to get involved in (and even that seems to have been accidental). And while Morty was, as I’m sure all of us will never forget despite our best efforts, victimized before, here his trauma is the result of his conscious decision to take action he thought himself incapable of. It’s one hell of a scene, stood somewhere between horrific and poignant, and the fact that Morty shows no intention of telling Rick about it makes me concerned for what’s to come.

Oh, and that “Never betray me” line? I think we’re going to have plenty of opportunity to dig into that in the future.

Vrai is a queer author and pop culture blogger; they’re still waiting for the inevitable towel homage. You can read more essays and find out about their fiction at Fashionable Tinfoil Accessories, support their work via Patreon or PayPal, or remind them of the existence of Tweets.