And here I was afraid we'd have a slow start. 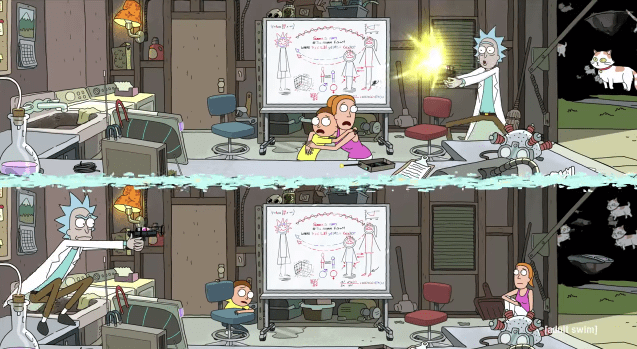 The Recap: Rick finally restarts the timeline after freezing it at the end of season 1; however, six months of living in frozen time leaves his, Morty, and Summer’s own timelines unstable, and some regular old teenage doubt is enough to start fracturing our three characters into multiple Schrödinger-type “possible” existences.

First, the thing that anyone with eyes can tell: this is a staggeringly ambitious work of animation. Each possible timeline has equally realized animation, each has simultaneous audio mixed in such a way that a particularly dedicated viewer can still work out the individual lines, and the overall image never sacrifices cohesion no matter how busy the frame gets (though perhaps you, like me, gave yourselves a bit of a headache trying to parse everything simultaneously).

It even pulls double duty as a shorthand of sorts for how the alternate selves idea might work on a practical level: a set of identical circumstances has one small change (Morty mouthing off to Rick, or Summer taking the initiative) and has the potential to spiral out from there into more lasting consequences. Taken from birth onward, we suddenly have a picture of how we could have our Rick stand believably alongside four increasingly different versions of himself in the new opening. I have a feeling this visual shorthand is going to be a lot of help down the (time)line.

The build of this episode seems to imply three things – one, that like the Venture Bros creators Harmon and Roiland assume the memory of the 2014 season finale is fresh in your brain, meaning that they don’t have to waste time going over it; that same assumption also implies that they feel comfortable throwing literal layers of action at the viewer under the confident assumption that they’ll have easy access to this content later for repeat viewings; and that the “every episode is an entry point” mentality doesn’t mean that they’ll be wasting a second of their ten episode runtime.

But as is so often the case with this show, I’m less hung up on the technical wizardry than the wealth of character relationships on display. The episode grounds itself by returning to the “high concept A plot/grounded B plot” setup from the early parts of season 1, which is arguably a step back from the more fully integrated plots of late s1 but also keeps the timeline stuff from becoming overwhelming. And it manages to double as both a basic sketch of all the characters – Rick is a smug genius, Morty is nervous, Summer is cocky, Beth is overcompensating and Jerry is the dumbest guy in the room – while also elevating what we know about them to a new level of complexity.

Jerry might be the most surprising change right off the bat. While he was softened considerably from his “desperate blowhard” persona by his heartfelt interactions with Doofus Rick and weirdly earnest love of certain James Cameron movies, this is the first time we’ve seen him take constructive action in the narrative (apocalypse aside). Moreover, we’ve finally got a sense of what on earth keeps Beth and Jerry together on a good day beyond pity and terror respectively, and Jerry’s simple but effective gambit (again born out of a pure and rather childlike passion) makes a sweet and simple counterpoint to the constant game of spoken lies and truthful actions that is Rick’s every relationship with other human beings.

Beth likewise proves herself to be even more her father’s daughter, almost impossibly adaptable in a pinch and skating on an ice-thin veneer of confidence frozen over an abyss of past mistakes. It would seem that she doesn’t quite share Rick’s all-consuming ego (as the script takes the time to point out for us), which may prove relevant down the line. In news that is neither here nor there, I’m still not sure if the “deer returning to nature and an inexplicable Native American companion” is funny-ha-ha or funny-bwuh (or maybe it’s just playing on tired stereotypes, I leave that to better souls than I), but I distinctly remember a laugh on both occasions.

As for what constitutes our main trio, the kids this episode are mostly presented in light of their relationship to Rick. Most concerning is the fact that despite seeming to get along pretty well in the first season, their new equal prominence in Rick’s adventures has them at each other’s throats pretty quickly. And while Morty still has prominence – he’s the brainwave armor, he’s more visibly crushed by Rick’s “Pieces of Shit” lecture, and at the end of the day he’s the one Rick makes the sacrifice for – I would wager this sibling rivalry isn’t gone forever.

And then there’s the scientist himself, the man putting every inch of effort into pretending like he doesn’t care when in fact, on at least a pragmatic level, he very much does. This episode takes no time in showing what savvy viewers no doubt suspected – that Rick has it together in the sense that he’s a ball of mistakes and self-loathing (the way he talks to his dimensional duplicates is…illuminating) held together by various types of substance abuse and an overpowering survival drive. The theoretical sacrifice scene is a beautiful moment, executed with minimal schmaltz and course-corrected without taking the moment back, a reminder that there’s a reason to invest in this character beyond simply using him as an escapist mouthpiece to say horrible things (and here I am looking significantly, if in an off topic manner, at the early 2010s run of Deadpool comics).

But it’s not something I’d expect to see every episode. Rick’s softer emotions, such as they are, seem to show up only in the most dire of situations (whatever else can be said of it, Rick’s silent realization, calculation, and revenge in “Meeseeks and Destroy” is one of my favorite moments for the character), and to go to that well too often risks cheapening the power of those moments. Likewise, the piecemeal revelation of his past actions manage to provide plot points without feeling cheap and to preserve Rick’s mystery without being hackneyed, a balancing act I look forward to seeing the writers preserve. Roiland and Harmon have previously mentioned their intent to humanize Rick without softening him, and if they strike this balance through the rest of the season, I would say we’re going to be just fine.

Want to share this on Tumblr? There’s a post for that!
Vrai is a queer author and pop culture blogger; they’re almost certain this terminal wave of time puns can’t go on forever. Maybe. You can read more essays and find out about their fiction at Fashionable Tinfoil Accessories, support their work via Patreon or PayPal, or remind them of the existence of Tweets.