Rick and Morty Recap: Vindicators 3: The Return of Worldender 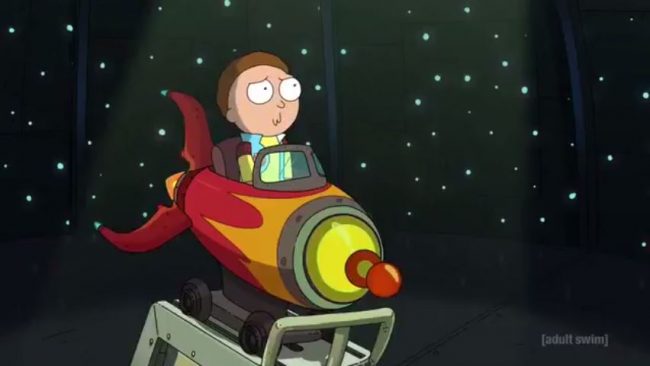 The Recap: Morty insists on accepting a call to adventure from the Vindicators, but the quest takes a sharp turn when a blackout-drunk Rick redesigns the world-ending villain’s lair as a series of Saw traps designed to make a point.

This week continues in the vein of “Have we reminded you Rick is terrible, actually?” episodes; while it’s a slight quality dip from the preceding three, it nonetheless manages to land some well-executed hits. Parodies of semi-current media are a previously-tapped well for the series, but the script manages to make it feel fresh again by examining the potential for self-aggrandizing sneering that exists as the flipside of its most incisive moments of optimistic nihilism.

The premise of Rick getting so drunk he doesn’t remember making an elaborate murder dungeon puts a rather blunt point on the seasonal theme that Rick is the architect of not only his own destruction but also that of every relationship even tangentially near to him (distanced by an element of willful ignorance and ever-deepening substance abuse issues), but the interesting part of it winds up being Morty’s reaction to the whole thing. This is his first real solo adventure of the season, and it proves a surprise to see how competent he’s become in fixing Rick’s dangerous mistakes.

That Morty’s become so disillusioned is more expected, but his continued desire to believe that Rick is good somewhere deep down only becomes sadder as the character and the audience have that football pulled away yet again. This is one of Morty’s best outings since “Mortynight Run” (Roiland’s acting deserves a shoutout too, packing a lot of sadness and more potent anger under Morty’s exasperated boredom); the question of whether he’ll become a replica of Rick has always been an embedded part of his character, but seeing him begin to branch out and attempt to make connections outside his immediate family is a new wrinkle that refreshes the pattern of being hopeful-then-disappointed by his grandfather.

The actual Vindicators themselves aren’t much to write home about. Other than some neat designs they’re basically one-note jokes, the same kind of self-centered assholes that often give Rick a perfect chance to point out how awful sentient life is (as Morty is now savvy enough to point out). It detracts somewhat from Morty’s weariness with the smug Saw traps about how no one is special, etc. etc. ad infinitum, when there turns out to be little worth saving in the people Morty has chosen to put his faith in.

The presence of a “lol triggered” joke has to be the absolute nadir of the episode, a cheap potshot that also deprives us of Christian Slater’s Starlord-esque hamming far too early in the episode. It feels doubly out of place in an episode that makes an offhanded jokes about the unseen Vindicators 2 killing off three heroes of color just to bring back Rick in the next sequel, a joke that doesn’t really land outside of its obvious nod to Hollywood trends anyway—Rick himself being Latinx (probably? Is that debate finally over?), as well as the fact that just last episode Susan Sarandon was cast to play Dr. Wong.

These little moments serve as reminders that while the show can be blisteringly on-point in its best moments, and this season in particular has markedly improved its writing of women by expanding the gender diversity of the staff, it still has moments of slipping back to the intellectual laziness that brought us the Summer plotline in “Raising Gazorpazorp.” I come by no means to bury the show, nor to belittle what I consider its genuine dedication to writing smarter comedy with an inclusive eye, but as their successes raise the bar, that means the slip-ups that would’ve seemed unremarkable in season one look all the worse by comparison.

Likewise, this is an overall solid episode whose greatest sin is being good in comparison to prior excellence. Something had to break the streak, and no doubt we’re in for some of the customary low-key episodes before ramping back up to the traditional gutpunch of the finale—though next week is supposedly a Jerry episode, so there are all kinds of ways that could get real brutal, real fast.

Vrai is a queer author and pop culture blogger; they’re recovering from a case of con plage. You can read more essays and find out about their fiction at Fashionable Tinfoil Accessories, listen to them podcasting on Soundcloud, support their work via Patreon or PayPal, or remind them of the existence of Tweets.