We've had bad times together, right? 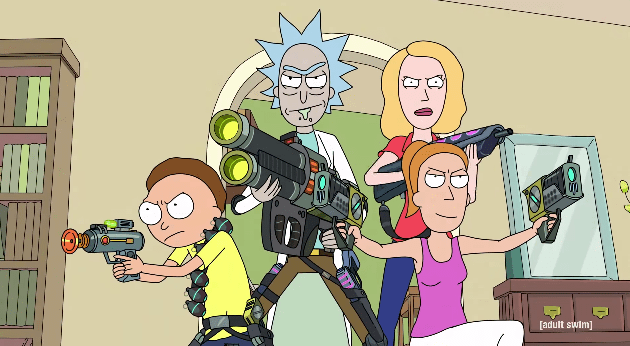 Catch up on the rest of the Rick and Morty recaps if you’re behind!

The Recap: Someone (read: Rick) has tracked an alien parasite into the house which multiplies by becoming a wacky sidekick and planting positive memories of itself in a host’s brain—new memories, new sidekicks, new parasites until the entire planet is destroyed. Rick locks the family inside the house and sets to increasingly John Carpenter-esque paranoia over who’s real.

“Flashing back to something that never happened” isn’t quite a fresh conceit—the South Park episode “City on the Edge of Forever” way back in 1998, and that in itself was a parody of the clip show format that’s more or less faded from existence (the only recent example I can think of came to be due to Nickelodeon’s ruthless slashing of Legend of Korra’s budget). But then, Rick & Morty has always been about the tweaking of familiar games, and the flashback format (in addition to being what I perhaps with a touch of spiteful glee took as a Family Guy knock – the cutaways that are literally contributing to the destruction of the planet) lets the animation play with the kind of delightful micro-absurdity that we haven’t gotten to see since “Rixty Minutes.”

As usual, the character designers are having a field day, cramming in all of the weird notebook doodles that don’t normally fit into the show’s alien aesthetic. The huge number of characters juggling lines also means a whole lot of voice acting greats in one episode (including Tara Strong, Keith David, and frequent guest Tom Kenny). And while the script risks leaning a little bit hard on the meta aspect during Rick and Morty’s confrontation, the majority of the episode smoothly juggles in new players without stumbling overmuch on the jokes (except for maybe Rick’s long reel of catchphrases—I’m a fan of Roiland’s improv ability, and I know that clip’s been around since the hiatus convention circuit, but as it sits in the episode it’s a little too long to pop and a little too short to come back around again).

So the comedy by and large works, even doing the impressive job of making the major sidekicks fairly likable during their short bouts of screen time. Which is a good a time as any to start talking about this season’s hobby of pulping our collective cardio pulmonary systems on a weekly basis. While one would think Rick’s failed suicide would be good cause to sit back a little and have a breather, the intensity settles for taking a sharp left and settling on Jerry. His subplot proves to be unique from Summer’s in “Rixty Minutes,” providing much more opportunity for contrast. While Summer and Morty end up grasping the greater ideas of universal purpose and so on, Jerry’s emotional arc (his whole character) is entirely wrapped up in his interactions with and feelings toward other characters.

His scenes with Sleepy Gary are tender, tragic, and ever so slightly unsettling in an existential way, and this leaves us in a strange position: Jerry, the season one Angry Blowhard who is still both cowardly and pathetic (how about that homeless guy scene, huh) is also now the most open and emotionally vulnerable member of the main cast. The fact that Jerry and Gary’s relationship is played as not one whit a punchline but as the episode’s beating heart is a nice building block on top of last week’s handling of Rick’s dating life (I’d also give props to the prom scene, which was “the man in the dress” gag in theory but tonally was played as a completely sincere non-comedic gesture).

It’s a fascinating combination of character notes that most shows shy away from, preferring either a slimy punchline or a relatable “they’re just like us” mundane type, and I look forward to seeing how this gets explored in future. Frankly, I’m not sure if it wouldn’t be better for everyone in the Smith family if Beth and Jerry’s marriage did break up (certainly then Beth could go back to school or find someone she respects, rather than drinking herself into a bitter stupor) and Jerry went off adventuring with Doofus Rick (yes, even with the usual low space survival rate of the average Jerry).

I must confess to you, readers, that I am somewhat more on the fence about the episode’s big finish. On the one hand, I would be fully willing to accept the argument that the fate of Mr. Poopy Butthole (a string of words I never thought I would type at all, much less in serious conversation) is meant as a deliberate undermining of our expectation of narrative linearity in what we know to be a multiverse with many apparently similar templates, including a questioning of the assumption that this is in fact the same Rick and Morty we saw just one episode before; that it is in fact one of the most elaborate red herrings in a modern TV show, throwing every potential clue that MPB is a parasite without ever confirming it.

Likewise, I reserve the right to revise the ensuing paragraph in the fairly likely scenario that we revisit this character in future. There’ve been a lot of loose threads deliberately left for later thus far, and there’s something just similar enough in the pastel color scheme and rounded simplistic design that my overwrought brain is wondering if this might be some erstwhile Morty. There’s plenty that could be done with this down the line.

But given only what we know within these 20-some minutes, I can’t shake the feeling that this is sort of the episode’s moment to throw up its hands and say “fuck you, you think you’ve figured us out? I bet you didn’t expect this.” This new Golden Age of cartoons has been built up (thanks to shows like Adventure Time and especially Gravity Falls) as one that relies on audience collusion and interpretation of miniscule clues. “A giant render farm,” as Roiland himself called it—ironically, in the same interview where he and Harmon talked about only being able to do twists in singular episodes and not over arcs. You can’t get ahead of the audience, because there are millions of them and a handful of you.

And in the end, I couldn’t help but read this as a response of sorts to that phenomenon. The shooting itself doesn’t really add anything to the plot, after all: we already know that Beth hides from her issues through alcoholism, since this very episode brings it up through Summer’s memories, and the lack of charges just means it’s one more emotional trauma to pile on Rick’s relatives. On the other hand, it arguably opens up some plot holes: if this IS the “main” universe we’ve been following, has time passed as such an indistinguishable rate that MPB really was there for some considerable length of time; if MPB was not the original parasite, then why did he encourage the first flashback and the paranoia surrounding the blast shields, and where did the other parasites continue to spawn from; and if the thematic conceit of the episode was that relationships are an amalgam of positive and negative experiences, why then pull that away for the sake of a singular shock? A story that doesn’t obey its own internal logic (however absurd) is one without stakes, which can be difficult to care about in the long haul.

There’s simply too much of it that rings not-quite-right, almost like a late game rewrite to replace another ending (but let me not get my tinfoil hat too soon). The only one that truly leaves a sour taste is that final, thematic concern. While this show’s never been afraid of the nastiness of human nature or the bleakness of the universe, it’s never before sunk low enough to snatch back its own bizarre sentiment in the name of one final middle finger. It may end up being that this episode and the last are early-going pushes at the boundaries of what the audience will accept, and ultimately the final few minutes can’t bring down an otherwise solid episode. Surprisingly enough, I find myself feeling optimistic.

Vrai is a queer author and pop culture blogger; at this point they wouldn’t get off this ride if you paid them. You can read more essays and find out about their fiction at Fashionable Tinfoil Accessories, support their work via Patreon or PayPal, or remind them of the existence of Tweets.