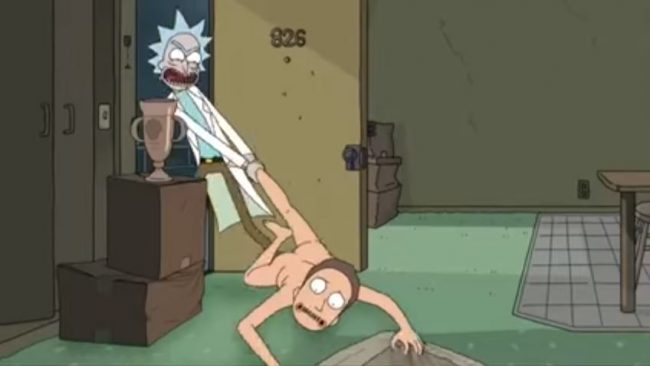 The Recap: Rick takes Jerry out on a fake adventure (at Morty’s request) that ends up turning into a real one as Jerry becomes party to an assassination attempt; after getting dumped, Summer attempts a boob job with equipment from Rick’s lab and winds up growing larger than the house.

One of this season’s running themes has been the process of dealing with fallout, a focus that involves holding to a sense of continuity far more than previous seasons and keeping a bead on the cast’s emotional arcs rather than leaving a character buried under any given trauma while they were offscreen. It’s been refreshing: while the show’s one-off episodes can be some of its best, the high-concept grotesquerie and bleak edges would eventually lose their sharpness without a strong backbone of character if not for the overarching narrative.

This season has done wonders to shore that up so far, and continues by having an episode that’s all about shirking responsibilities and roles: Rick doesn’t want to actually have the adventure he promised to take Jerry on but does (presumably) want the brownie points, Jerry wants to make a statement about being mad at Rick but doesn’t want to deal with the consequences of any firm decision he might make, Beth doesn’t want to take any actions that might upset the fragile boat of her current self-interest regarding Rick, and so on. It’s about the necessity of familial bonds framed through pure self-interest. And because this is R&M, the lesson isn’t a need for selflessness but an acknowledgement that you have to balance what you want with putting yourself out there for other people.

Prior episodes have spent a lot of time on peeling back the layers of Rick’s awfulness, but since that, too, could get monotonous if overdone, “Conspiracy” takes time to make everyone kind of terrible, while still giving us a little bit of a reason to cheer for them. It feels like a test run for future dynamics, powered by the realization that you can only tell the audience your characters are terrible for so long without actually doing anything about it. Rick’s still doing his chaotic neutral thing, but Beth remembers for at least a minute that she still has kids who need her, and Jerry at least ostensibly realizes what he needs to change about himself. There’s a sense that there could be change, however incremental.

Actually, speaking of Jerry, it’s nice to see the script put a critical eye on him in a cutting but also constructive way. Jerry has often been the butt of slapstick and various episode premises, because he’s kind of an asshole and most of us aren’t too sorry to see him take the beating. But “Conspiracy” looks past his general passiveness and cowardice to the actual functional effect he has on others, and how the pathetic effect that makes him pitiable also pulls those in his life into fixing his problems for him, saving him from having to do anything about them himself.

Jerry doesn’t quite measure up to the “Nice Guy” archetype, but he’s not a great person either, and it’s great to see this episode capitalize on his hints toward being a better person in a way that might actually stick, at least a little. Like everything else, Jerry is most interesting when he’s changing, which doesn’t necessarily preclude wanting to see some non-fatally bad things happen to him along with the occasional win.

This is an episode that mostly features men talking about women and their effect on them (Summer’s whole problem starting with being dumped, Rick and Jerry arguing over who “stole” Beth), and while Beth does have an arc involving opening up to Morty and being there for Summer, it’s Morty who probably has the episode’s best moment. While everyone else is looking for some kind of audience or validation, he quietly uses the growth ray on Summer’s now ex. No fanfare, no declaration to anybody else. Just kinda … does it. On the one hand, it’s sweet, given that Summer is a vengeful person who would certainly approve; and on the other kind of unnerving, as Morty continues along his arc to being a well of apparently unassuming but deadly anger issues. Can’t wait to see how that one explodes.

Vrai is a queer author and pop culture blogger; they’re tired of packing boxes, and also of nazis. You can read more essays and find out about their fiction at Fashionable Tinfoil Accessories, listen to them podcasting on Soundcloud, support their work via Patreon or PayPal, or remind them of the existence of Tweets.