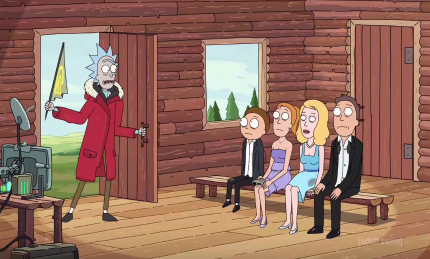 The Recap: The family is invited to Birdperson and Tammy’s wedding. Rick’s reluctance to open up is soon validated by the revelation that Tammy is an undercover agent for the Galactic Federation, a universal government body that counts both Rick and Birdperson on its most wanted list. While Rick manages to escape (Birdperson is not so lucky) an attack of conscience leads him to turn himself over in exchange for his family’s safety.

In searching for something to fixate on in regards to this episode, I keep coming back to the concept of betrayal. Tammy’s reveal as an undercover agent (and really, we all should have known – those two were far too happy and stable for this show) might be the inciting agent that sets the plot off in earnest, but variations on the theme ripple throughout the episode. The point of conflict ends up being not the betrayals themselves whether and how their sources matter: Tammy guns down Birdperson because she sees him as a dangerous intergalactic criminal, Rick leaves his family behind because of the pain he has and will continue to cause them. Both of them are logical in their way, and both are devastating to characters we’ve come to care about.

This is a blowout of an episode alright, and it balances various items from the show’s toolbox well. The wedding allows for some bits of backstory that are presumably now lost to us forever (and oh how I want more of that backstory), a low simmering tension and the usual panoply of great background alien designs; while the more hectic chase half puts a wise laser-focus on the family even while exploring the horrors of the On the Cob planet. It makes for a neat microcosm of the episode’s thematic galactic-horror versus personal impact story, and watching a show that thrives on infinite possibility slowly close the noose around Rick’s neck is distressing without falling over the edge into being numbing.

I say Rick, but there’s serious concern to be had for the whole family here. Beth is a record level of high strung during the entire episode, and it’s not clear whether her liver will survive Rick leaving a second time (I am campaigning quite hard for flashbacks to tiny Beth in future episodes); Summer’s been betrayed by one of her few actual friends, Jerry has now officially reclaimed his title as The Worst, Honestly, Fuckin’ Jerry; and Morty….I think Morty might’ve been serious, on some level, about that “I’ll never forgive you” thing. Even if it’s equally likely that he’ll miss Rick a lot more than he let on. And while the Smiths are undoubtedly more qualified than anyone else on Earth as far as dealing with the new influx of alien tourists, it will be interesting to see how affected they are by Rick’s pragmatic survivalist mindset when he’s not around.

Stepping back to the season as a whole, it’s got the earmarks of being the sophomore stretch that it is – while I’d call the average quality higher than the first season, I’d likewise still count “Rixty Minutes” and “Close Rickcounters of the Rick Kind” as two of the show’s finest achievements in absurdity, mythos, and pathos. But that’s almost to be expected when a show is pushing its own boundaries as much as this season has. Very little from season 1 is picked back up, while new elements are introduced and left in the sandbox for future episodes, and there are times when it seems to ask a great deal of patience from its audience. In retrospect I’d term this a very Dragon Age II sort of outing – a set of episodes that spends a lot of time leisurely laying out a tragic personal narrative while leaving most of the larger world building balls juggling until the very last minute, and then staging a world-shaking event and peacing out for a very long hiatus. But I’ve always loved Bioware’s little black sheep, and I find myself won over by this season too.

More than anything, this episode hammers home the fact that this has been Rick’s story all along. Even as other characters are spotlighted, burdened with misery and then put under a magnifying glass not unlike an ant on a bright day, all of it comes back to Rick and his hedgehog’s dilemma. We’re given the opportunity to see him from angles that were assumed in season one’s “seriously the worst but kind of not waaaaaaay down there” characterization, but since then we’ve seen him open himself to love, friendship, protectiveness, jealousy, even small bouts of earnestness…only to be smacked down every time, often by past rash mistakes or the attempt to run from them. It’s an ugly, seemingly perpetual cycle that he must have gone through time and time again, and yet that desire for human connection keeps seeping through his cynical and abrasive exterior.

Rick’s struggle is mirrored in the tone of this season as well. The heart of the show has always been a bitter, nihilistic core balanced out by the reprieve of genuine interpersonal connections, and there were a lot of episodes this run that pushed that slider as far to the nihilist end as it could go without breaking the show entirely. I’m still not sure all of them worked (though “Total Rickall” has certainly risen considerably in my estimation since I’ve had a few weeks to sit with it), but the finale has reigned that bleakness in quite effectively. In retrospect it’s an offering of worsts that preemptively heightens the strange, beautiful human tenacity of that cabin conversation (a conversation of less than two minutes that effectively becomes the lynchpin of the season). It’s a risky gambit, structured more for a complete season binge than week to week viewing, but the symmetry of it is admirable.

And cruel. Did I mention it’s cruel? The clear amount of love and effort poured into this show means it has an agonizingly long development time (not quite Venture Bros long, but wrangling for the title). If Mr. Poopy Butthole is to be believed, we’ll be wringing our hands collectively about Rick’s imprisonment and how badly things will go downhill for the Smith family and Earth as a whole until 2017. We should at least have a few months to recover from the finale before the blu-ray comes out and the marathons of pain begin in earnest. For my part, I want to thank all of you for coming along on this season, old fans and new ones alike. Hopefully we’ll be speaking again when that fated day rolls around – but either way, it’s been a great ride. If you’re looking for something to fill the R&M shaped hole in your heart, you can always come by and watch Steven Universe with me on the weekly, or keep up with my more nostalgic recaps of the 90s classic Gargoyles. And whatever happens, stay safe out there.

Vrai is a queer author and pop culture blogger; they’re easing the pain by imagining a universe where Rick and Birdperson became an item and neither one of them died horribly. You can read more essays and find out about their fiction at Fashionable Tinfoil Accessories, support their work via Patreon or PayPal, or remind them of the existence of Tweets.