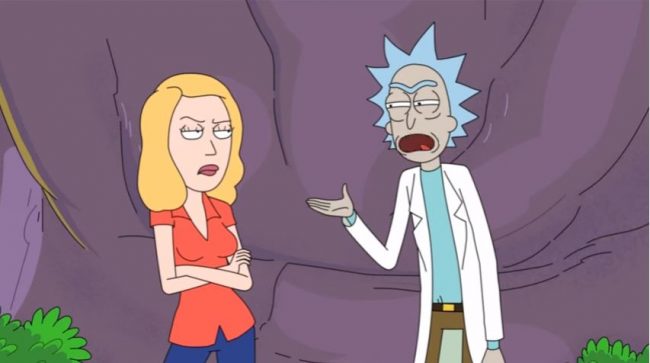 The Recap: Beth visits a procedurally generated dimension Rick built for her as a child in hopes of rescuing a friend she’d repressed memories of abandoning there, learning in the process that she really is just like her dad; meanwhile, Summer and Morty suffer through custody weekend with Jerry and his rebound alien girlfriend.

This might be one of the most considered, thematically developed episodes of the season. Director Juan Meza-León and writer Mike McMahan last worked together on the season three premiere, and they shine just as well with this comparatively mundane material (for R&M, anyway) as they did with the mindhopping space epic. We’re severely overdue for an episode focusing on Beth, and while a single episode can’t fill that void it makes a pretty good start of it.

The script for this episode structures itself as variations on a theme: the transfer of behavior between generations.  It’s a somewhat baldly stated conceit, but that doesn’t detract from the success of the execution. McMahan’s script (and the rest of the writers as well—I give a fair amount of time to the lead writer, but R&M is clearly a strongly team-based pitch room) connects and twists the theme through each set of parents and children—Rick and Beth (two of a kind), Jerry and Morty and Summer (the kids are a vast improvement), even Tommy and his barely-seen father (Tommy is fucked up in the exact way his dad is accused of, for debatably unrelated reasons).

Jerry’s subplot is a pretty straightforward breather. His new girlfriend is less character than conflict-generating plot device, but it’s hard to begrudge the opportunity to see Morty and Summer operating on the same tired, frustrated wavelength. The show’s always struggled with the “love’ part of the “terrible people who love each other” subgenre; showing that these kids are almost certainly not okay but at least better off as a team scratches that narrative itch in an appealing way. And I have yet to tire of people telling Jerry to get his shit together—at least so long as it continues resulting in at least incremental change.

But all of that is so much side dish compared to the A-plot. The time in the first act spent assuring us that Beth and Rick are smarter than the plot is briefly excruciating, the kind of writing choice with obvious logic behind it that’s still something of a chore to sit through, but it blossoms fantastically into the discussion of Beth-as-young-sociopath. Watching Rick pull out Beth’s childhood toys is wonderfully layered writing: here we have two unambiguously terrible people responsible for multiple deaths with little to no remorse for their actions beyond Beth’s slight discomfort at how this would affect perceptions of her, but the subtext at work speaks volumes. Why did Rick save these toys? Why did Beth forget about this element of her relationship with her father? What does this mean for both of them and also Beth’s unseen mother?

Of course, the most important subtextual question is the pointedly unanswered one: if this cloning project is so ideal and so perfect, then why did Rick ultimately leave his family rather than employ it? The fandom will no doubt have plenty of time to spin theories on the subject, as well as Beth’s decision—next week’s season finale seems to be returning to the Citadel, meaning that it’ll likely be literal years before we see any kind of resolution on this subject.

While slightly frustrating, it makes sense as an issue to leave dangling in light of the direction the show’s taken this season. Beyond questions of practical usage, the idea of the perfect clones flies in the face of the fact this season has hammered home again and again: life is about choices, and actions have consequences. It’s kind of awesome to see Beth begin to embrace who she wants to be rather than who she thinks she should be (even if that…uh, involves a lot of murder), but a brief moment in a literal sealed-off fantasy land isn’t the same as deciding to abandon your not-yet-grown kids without even talking to them (points in Beth’s favor: making sure the kids’d be cared for; points against: not wanting to deal with actually interfacing with them as humans). Whether or not Beth left—I’d say the framing implies pretty heavily that she did—that forces changes on both the character and the central family.

Up to now the show took Beth’s normalcy for granted, using the mundanity of her issues and the narrative archetype of The Oblivious Mom as a source of grounding. With that gone, everything has to stabilize into a new normal. And in a show that so frequently turns its eye toward metatextual subjects and how stories work in particular, I have high hopes for how the writers might explore that topic going forward.

Vrai Kaiser is a queer author and pop culture blogger; they’re not ready for another two year break. You can read more essays and find out about their fiction at Fashionable Tinfoil Accessories, listen to them podcasting on Soundcloud, support their work via Patreon or PayPal, or remind them of the existence of Tweets.