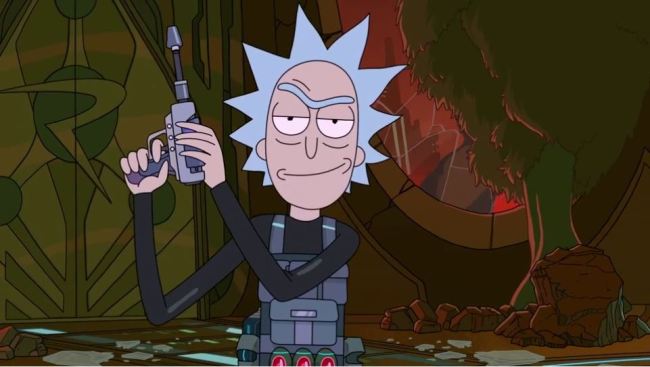 The Recap: While Rick breaks out of prison and plans to take down the Federation from the inside, Summer (and a reluctant Morty) try to hatch a plan to bust Rick out, a cataclysm of cross purposes that ends with the Federation collapsed, the Citadel of Ricks destroyed, and Beth newly divorced. As usual, Rick isn’t exactly a hero or a villain, but he’s definitely a dick.

Well, that was a surprise. While I’m scrambling to get my thoughts together, I’m still unable to say much more than, “Yup, this seems like something they’d do.” Why not drop a long-anticipated premiere with basically no warning on April Fool’s Day? R&M’s audience has certainly proven itself cultishly loyal, even after the series exploded in popularity with season 2, and the 18 months away don’t seem to have dampened that enthusiasm at all. And for their part, the R&M crew have created a premiere that rewards that loyalty and patience.

This is a dense episode, almost on par with the later seasons of The Venture Bros.–a series that long ago decided “fuck it, everyone’s watching this on DVD so we’ll write like they just binged the backlog yesterday.” We come back to a fake-out that seems to reestablish the status quo, which holds for maybe a minute before giving way to the consequences of the season 2 finale. It sets the tone as it means to go on, kicking the status quo in the teeth until the landscape for the rest of the season is almost a blank slate.

The between-seasons break particularly shows in the ambition of the animation, which houses plenty of action sequences with a huge amount of detail on screen; the tenser scenes are no slouch either, with some impressive scenic composition and design. When the simplicity has to balance somewhere, usually in scenes back at the Smith house, it feels less like budgetary compensation than deliberate contrast.

Most impressive, though, is the script’s dedication to keeping the audience in a state of emotional upheaval. It complicates the narrative question of “does this prickly asshole actually care about his loved ones” with so many feints, extenuating circumstances, and outright lies that at times it seems utterly plausible to say, “No, he’s just going to let this situation blow up.”

Both because he’s done it before, as this episode illustrates by revisiting the Cronenberg’d Dimension C-137, and because Rick’s a layered enough character that he could believably fuck another character over for a myriad of reasons: he’s seeing a bigger picture he didn’t explain to anyone, or he calculated an acceptable risk/loss, or his self-loathing got so bad that he just couldn’t deal with whatever the situation is. All those can be true without automatically invalidating genuine attachment, which has kept the trick from going stale.

That kind of constant unease can backfire if an audience goes numb. The series has always run on a sort of optimistic nihilism–nothing matters, so everything matters–but at the end of the day there has to be something to root for that’s not automatically doomed to go up in flames. The show’s answer to that potential problem so far seems to be Summer and Morty, who are much more likely to show human empathy for one another on a regular basis.

Summer in particular stands to be the best thing this season has going for it. The comic has its share of action hero Summers, but this one isn’t quite there yet. Instead, she and Morty each represent different aspects of Rick. While Morty is learning to be deceptive in order to protect his family, Summer is determined, impulsive, and already not half bad at improvising a plan even if she doesn’t have the tools to make sure it doesn’t end badly. I’m not sure it can be said that either of them is exactly better off for Rick’s influence, but it’s certainly making for dynamic character arcs.

The episode ends on one last take of uncertainty, promising us the “darkest” series of adventures yet. I believe that, too. Not because of the return of Tammy and the newly resurrected Phoenixperson, but because after all that discussion up there I am absolutely willing to add one more thing to my list: people Rick considers disloyal vanish, fast. And after Rick’s speech about manipulating his way back to the family, I’m not sure my question is “does Rick care?” It’s getting more in the range of “how much emotional damage does he have to do before it stops mattering that he cares?” I’m concerned this season might have an answer for me.

I’m not sure when the next new episode will premiere, because modern animation laughs at my attempts to schedule things–the preview for episode 2 reads “summer 2017,” so we may all want to settle in and chill for a while. Maybe play that neat pixel game on Adult Swim’s website. If you wanna catch up in the meantime, you can always read my primer on season one and see if the show’s for you. Whenever it happens, I’ll see you there.