Rick and Morty Recap: Rest and Ricklaxation | The Mary Sue 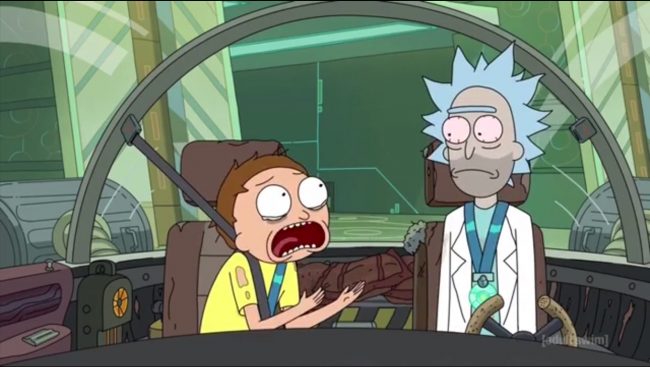 The Recap: Rick and Morty visit a spa that detoxifies them of all the traits they hate most about themselves. But while Rick eventually realizes they can’t live without their other halves, Morty refuses to go back.

In keeping with the central theme of this season, we start with the aftermath of a “quick” adventure, blowing through the stunts and spectacle to focus on the emotionally crushing aftermath. The script lingers there for a surprisingly long time—a few quick cuts back to the toxin-Rick and Morty aside, the story is structured more to let us sit with the unease of watching this supposedly perfect world unfold. The tension is especially well-executed on Morty’s end, and while we’re trained to wait for the other shoe to drop, there’s brief joy in seeing the kid succeed for a change.

It can’t last, and there’s never any real sense that it could, but it’s a smart choice to take this tack as the season tips toward its back half, which is traditionally when the show throws its most vicious punches. The conceit for this episode is, after all, what some might accuse this season of doing: trying to “fix” our protagonist. Foreseeing that criticism, the show pushes all the way forward into examining what an apparently ideal fix would look like, with newly-confident Morty and polite, thoughtful Rick.

The obvious point—that making the leads emotionally healthy would deprive the show of what makes it compelling—is made early on without drawing overt attention to it, and the script then rises above by scratching into a deeper layer of the theme. Okay, first it takes liberal cues from Star Trek’s “The Enemy Within” and dips briefly into a darkly enjoyable American Psycho parody, but it also takes the opportunity to question the assumptions of what a “fix” looks like.

Having the detox machine function by removing what the individual hates most about themself is in keeping with the moral relativism the show flirts with, but it also sidesteps the problem of forcing the script to be too didactic or date itself too intensely. An actual magical fix would also require an outside contrivance to reinstate the status quo rather than having the characters move the plot forward. And it lightly pokes at the idea that without conflict, there’s not much show left. Wanting the characters to grow over time is one thing, but their flaws and conflicts are key to making compelling stories. It reveals the scaffolding of its own structure, and seems comfortably aware of how far it can move within those restrictions, though hopefully it’ll choose its own ending rather than tread water forever.

Rick’s initial decision to re-merge with his toxins initially does have that air of contrivance, but even that falls under the series’ general approach of having Rick be three steps ahead of both the cast and the audience. And in the meantime, we’re greeted to a sort of film-negative of our protagonists, which quickly becomes a case of “better the devil you know.”

Morty’s transformation into a textbook sociopath underscores his arc thus far and illuminates some troubling facts about just what parts of Rick he wants to emulate. His ideal self is a charmer insulated from emotional harm by a total lack of empathy—the perfect “easy fix” for a teenager whose emotional distress often comes down to being betrayed by Rick or feeling like the only thing standing between his family and death.

As befits his age, the detoxed Rick has a better handle on hiding his total lack of concern for his family. The hatred of “irrational attachments” is something he’s already passed on to Morty, and seemingly the only benefit of his experience is knowing he does need that part of himself. Which means taking back all the other traits he shook off, because the plot says so.

Jessica’s role in the plot was a nice surprise, though she still doesn’t have much role beyond “slowburn potential love interest.” Still, within those confines Kari Wahlgren was able to infuse some sense of personality, which is more than her past appearances allowed for. Maybe, like Summer, we can hope that this flash of potential will develop into a more three-dimensional character.

As for Morty, I wouldn’t be surprised if his current character arc eventually leads to the reappearance of Eyepatch Morty. As long as it’s not some time loop “they were the same one all along” business, which would be far too contrived for the strong streak the show’s had going on lately.

Vrai is a queer author and pop culture blogger; they’re sort of glad to have the two week breather. You can read more essays and find out about their fiction at Fashionable Tinfoil Accessories, listen to them podcasting on Soundcloud, support their work via Patreon or PayPal, or remind them of the existence of Tweets.