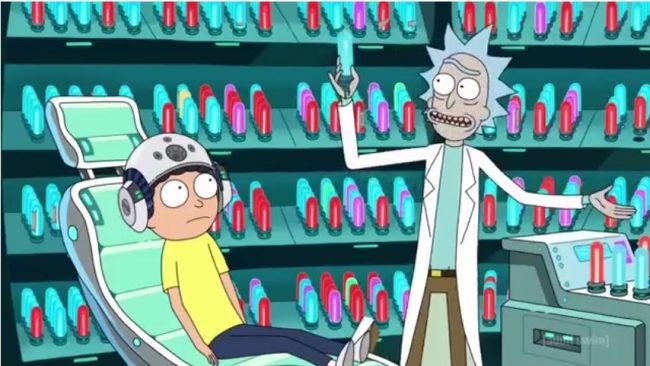 The Recap: Rick and Morty dive into the memories Morty asked to have erased from his mind (and some of the ones he didn’t). As Morty’s anger boils over, the ensuing fight over the memory gun accidentally erases both their minds.

The seasonal anthology episode is always the hardest to review: it’s a grab bag by nature, serving as a home to all the weird and visually interesting ideas that, for whatever reason, weren’t full episode material. The results are inevitably uneven, because these episodes also have a little bit of everything from all the writers and some bits are going to land better than others. That’s clearer here than in the “Interdimensional Cable” episodes—the memory format means each idea can have more time to breathe as needed, but the benefit of the commercial format was that if a joke didn’t land there wasn’t much time to dwell on it. Thirty seconds, bam, on to the next bit.

The memories open on one of their weakest bits, in fact, a vignette that’s too short to give any kind of emotional punch but too dragged out to really work as bleak comedy. Most of the other erased memories work better, and the ones that are more interesting than funny hit that quick blip sweet spot.

Like so much of this season, “Morty’s Mind Blowers” decides to prod at that formula, starting with echoes of season one but ending up in a far darker place. If Morty’s famous ending speech in “Rixty Minutes” evokes a kind of comforting nihilism, the theme of “Mind Blowers” is more to the tune of “hey kids, you like existentialism?”

Identity has always been modular in R&M. Our characters come in infinite recognizable if not identical copies, realities can be switched at any time, and there’s only the barest assurance that the characters we’re rooting for are having a cohesive experience that might lead to some kind of growth and change (i.e. for my own peace of mind, I’m assuming that tossed-off dimension swap predates Cronenberg World).

The question then becomes, “what is constant about the human experience? Given the human desire to seek narrative in random experiences, what thread is there to follow?” And the answer this episode gives is … anger. Anger and suffering, Morty’s specifically, are a constant of what ties this multiverse together. The thin veneer of happiness the Smith family sometimes achieves is a thin layer of ice over the bottomless well of understandable traumatized rage Morty is barely suppressing. Identity isn’t inherent but almost entirely based on lived experiences, and thus a person’s sense of self can be broken down and utterly reshaped by a hand with significant control and will. I haven’t seen a take quite this implicitly dark since Tom Stoppard’s script for Empire of the Sun.

Actually, let’s go a little deeper into the “universal constant” idea, because what we learn about Rick here might be the most fucked up thing of all. Not especially surprising, mind, but fucked up. For this Rick, “our” Rick, this Morty is a kind of stable universe. Rick can tailor Morty’s experiences that he asks for, then also take out anything that makes him look less than utterly cool, intelligent, and escapism-friendly. He creates the perfect version of himself in retrospect, or as much as he can without (presumably) collapsing Morty’s mind completely. He can’t get over his own shit, but he can use his grandson as a reflective surface and look at the better version of himself he’d like to be.

It’s a quietly cutting summary of what this season’s been doing with Rick’s character, pulling back the slick surface that was so idolized by certain segments of the internet and revealing the ugly tendons holding the whole image together. Then there’s the fact that Summer comes in to fix everything at the end—between the publicized adjustments to the writing staff and the on-the-nose closing line, it can’t help looking like commentary about the production side of things.

R&M has always felt uncomfortable when it got meta about its own creation—the show’s prickliness can make it hard to assess how much tension and bile is accurately reflected versus what’s played up for a joke. But in this case … well, it’s certainly the season with the most consistently strong writing of the three, and it does feel as though the series was wrenched into a more focused direction (far from the sort of eternally episodic feeling Harmon discussed around the show’s first season) that actually wants to say something about its characters in a way that forces them to grow and change (even if they change for the worse). It feels reminiscent of the shift that made later seasons of The Venture Bros. so compelling, and as long as the writers keep a handle on the final two episodes I see nothing but good things in the show’s future.

Vrai Kaiser is a queer author and pop culture blogger; they need to stare at a wall for a bit. You can read more essays and find out about their fiction at Fashionable Tinfoil Accessories, listen to them podcasting on Soundcloud, support their work via Patreon or PayPal, or remind them of the existence of Tweets.