I feel robbed of Summer the Vampire Slayer. 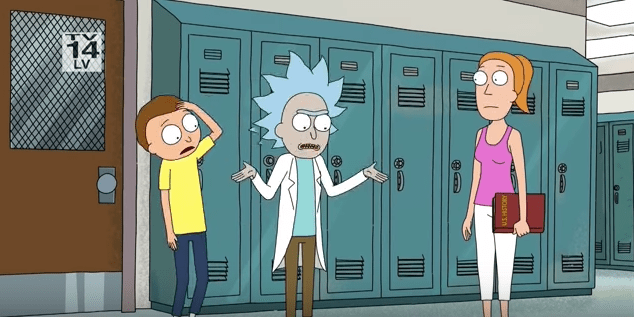 The Recap: Rick transfers his mind into a young clone of himself to help Summer and Morty with vampire problems at school, only to start undergoing a repressed psychological breakdown; Beth and Jerry spend time at a marriage counseling retreat with a supposed 100% success rate.

Well, the time has come. Get in your bunkers, lock the doors, get out the snuggies: we’ve reached an episode where the Beth-and-Jerry plot was stronger than the Rick plot.

It’s not that Rick’s storyline this episode—he inhabits the body of a teenager, is initially more open and supportive of Summer and Morty only to begin losing the things that make up his sense of self (like the alcoholism and existential dread)—is necessarily bad. The script gets some solid jokes and a suitably unique spin out of what’s basically a common fandom AU, and both the scenes of Rick’s genuine desire to support Summer and Morty and the later developments that put the kids in a position of agency narrative-wise (I am always, always down for a Summer-driven plot) are rewarding to watch. I’m sure we all suspected, deep down, that Rick would be the world’s most fantastic wingman.

But it never quite gels together. The vampire thread lingers between being a cold open and a recurring subplot, ending up with more time than it would’ve needed as a non-sequitur and not enough time to be a fully developed A plot—“the universe is terrifying and things occur without reason or necessary payoff” can work as a narrative device with the proper setup, but it doesn’t get to be a catchall for any dangling plot thread. Likewise, there’s almost a sense of the script fighting itself in how to explore Tiny Rick, teetering between prodding at how he might have acted as a teenager without running the risk of having to actually “explain” Rick.

That fight means that the genuinely intriguing idea of “are our identities defined by our mistakes and negative identities” winds up as an almost throwaway line in the third act (we’ve spent plenty of time exploring various facets of Rick’s despair and bitterness, but that line as a broader question has a lot of untapped potential in regards to where the rest of the family’s been heading this season), and the excursion winds up feeling like a plot that never quite broke the way the writer’s room wanted it to. There’s plenty of great lurking at the edges of it, enough for two separate episodes, but the condensing effect leaves it just alright.

If that all seems unusually harsh, it’s only because the “marriage counseling” plot is one of the strongest and best executed storylines this season’s offered thus far, and the juxtaposition is practically cruel. The counseling center is a wonderful bit of scenic design, able to turn on a dime from cloying, almost padded therapeutic design to an Aliens-inspired hellscape bathed in aggressive red light. Beth and Jerry’s escalating projections of one another are likewise fantastic, able to play on multiple levels of this deeply fucked up codependent marriage (worm-Jerry is spineless but also flexible, alien queen Beth is horrifying but also untouchably strong). And yes, also that Bill Cipher cameo that everyone and their dog has pointed out by now, which is yet another enjoyable mark on the strange, unlikely untwining of those two shows thanks to their creators’ friendship.

All of it, frenetic bloodbath and all, never loses sight of the relationship it’s exploring. The question of Beth and Jerry’s constantly tenuous relationship is one of those necessary show constants (I sometimes worry about the fact that the show doesn’t exist on a firmly forward timeline, but its commitment to retaining emotional growth has remained reassuring so far), and Rick putting his foot down about the counseling-or-divorce ultimatum is as much the audience’s desire as the character’s.

This season’s best moments have almost all come down to reinforcing the importance, however flawed, of the continued bonds between our five main characters, and it’s one of the things I appreciate most about the series. Given Rick’s enforced façade of half sociopathy, half solipsism it would be far too easy to slip into an endless stream of disconnected jokes and cruel happenstance, and the continual return to the family gives us a reason to come back even when the series is at its most punishing. In other words, the show works so long as it keeps reminding us why these people give a damn about each other.

The survival setting proves apt of that too, which is a first for this Beth and Jerry if not the characters broadly (see: “Rick Potion #9”). Their shifting affection and resentment for one another plays to the script’s emotional beats without being cheap, and the fact that it ends on a “for now” instead of a “forever” (these two seem to be perpetually in need of a crisis to draw them together, at which point the slow drift starts again) feels considerably less patronizing to the audience. Perhaps it is mainly that this feels like a consequential development to a relationship we’ve been checking in on for a while now, while the flash of intrigue (and, yes, some solid shock value) surrounding Rick’s attempts to circumvent old age and death come and go before we can do much beyond sort of nod and say “yeah, I guess that seems like something he’d do.”

Next week looks like it’s pulling out the stops as far as gross out effects go, with Jerry having contracted some kind of horrible murder-man disease from a batch of Rick’s frozen mutated bacteria. Could be a zombie-type episode, could be a total fakeou to something else. I kind of can’t wait either way.

Vrai is a queer author and pop culture blogger; they critique because they love, and then wait for the wave of guilt to roll in. You can read more essays and find out about their fiction at Fashionable Tinfoil Accessories, support their work via Patreon or PayPal, or remind them of the existence of Tweets.