No, Really, Rick and Morty Is Bad 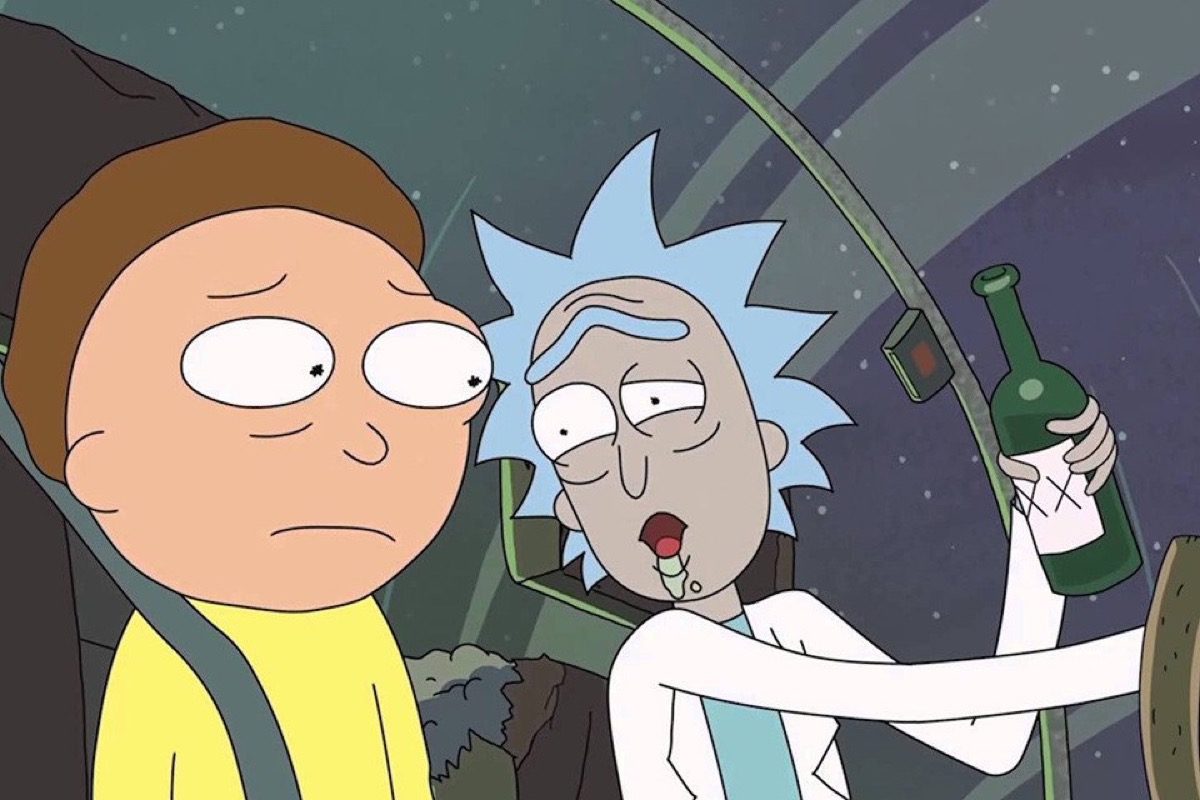 With Season 4 of the Child Abuse Caper Hour on the horizon, it’s a good time to reappraise the arguments often made in the show’s defense. Adult Swim’s Rick and Morty is a cartoon, created by Justin Roiland and Community’s Dan Harmon, about amoral space-adventurer Rick dragging his grandson, Morty, into dangerous sci-fi nonsense. In the face of its deteriorating reputation, the show has been defended as a deconstruction of toxic nerd masculinity. Probably the best argument for this has been made by Bob Chipman, who says that Rick is a skewering of media depictions of angsty smart men.

Look at the famous (infamous?) episode “Pickle Rick.” Best known as ground zero for an unending stream of obnoxious merchandising and memes, the story follows Rick as he turns himself into a pickle to get out of family therapy. When he realizes that his new pickle body can’t survive for long, he goes on an adventure through the sewers in search of an antidote. The resulting melting pot of action tropes and references could be mistaken for showing Rick as a badass, but in the end, he fails. This isn’t to say he dies, of course, but he does have to go to his dreaded therapy, defeating the whole point of the adventure. The therapist, Dr. Wong, tears him to shreds:

I have no doubt that you would be bored senseless by therapy, the same way I’m bored when I brush my teeth and wipe my ass. Because the thing about repairing, maintaining, and cleaning is it’s not an adventure. There’s no way to do it so wrong you might die. It’s just work. And the bottom line is some people are okay going to work, and some people, well, some people would rather die. Each of us gets to choose.

The point being made here, a point that is well-worn in conversations about the show by now, is that the story knows that you, the audience, shouldn’t want to be like Rick. It shows Rick to be a pathetic, miserable person, led into despair by his own crummy, screwed-up value system.

But is the show truly any good at doing that? Most of the time, it’s only concerned with two things: how sad Rick is and how funny he is. It is only rarely, fleetingly serious about the pain that Rick inflicts on his family. Usually, Morty’s suffering is played for laughs. The pilot ends with Morty having a seizure while Rick stands over his writhing body, shouting a nonsensical monologue laced with gags and fourth-wall breaks. The season 3 premiere, ‘”he Rickshank Rickdemption,” ends with a mirror scene where Rick, having broken up Morty’s parents’ marriage, declares himself the “de facto patriarch of your family and your universe.”

This, of course, is the cursed Szechuan sauce scene, the unlikely consequences of which did huge damage to the show’s reputation. During his speech, Rick says that his only goal in life is to once again have the Szechuan sauce that McDonald’s made as part of a promotional tie-in for Mulan. Seeing this, McDonald’s decided to knock together some legally distinct variations of some of the show’s jokes and characters and bring back the sauce for a limited run.

Unfortunately, on the fateful day, each McDonald’s location had been sent around a dozen sauce packets. This was wildly insufficient for the crowds that showed up, which, in some cases, reached the hundreds. Some Rick and Morty fans reacted by verbally abusing McDonald’s employees. This incident, the likes of which could only occur in the Darkest Timeline, is now one of the main things associated with the show amongst the Extremely Online.

This is unfortunate. Whatever else might be said about the show and its creators, this incident must be understood as one of the biggest corporations in the world plagiarizing their cartoon and bombing their reputation for them. I’m also not too interested in trying to use the actions of some edgelords as evidence against Rick and Morty, since the show itself provides more than enough ammunition. If we can separate art from the artist, then we can certainly separate art from the twenty-something dude who watched the show, only half paid attention, and missed the point.

But it’s worth asking why they did miss the point. I’ll concede that someone somewhere not understanding a story doesn’t mean the story is bad; there will always be a bigger idiot. But in the case of Rick and Morty, the show doesn’t consistently do a good job of communicating and following through on its ideas. There’s a lack of clarity in play that’s resulted in different critics, even from similar liberal and leftist perspectives, reading Rick’s original Szechuan sauce scene in completely different ways.

Ben Kuchera writes for Polygon that “the joke … is that all that work was done for a silly, arbitrary reason. There is no plan, and there is no meaning. It may as well be a dipping sauce.” Rick is a genius, but his genius is pointed at nothing of any substance; his life is hollow. Being smart isn’t a virtue in itself.

But Elizabeth Sandifer of Eruditorum Press is miles away from that take; she describes the scene as “genuinely upsetting” and presents it as the prime example of the commonplace dynamic of Rick screaming at a scared Morty. In other words, it’s playing child abuse for laughs. The scene seems partly ad-libbed by series co-creator (and voice of both Rick and Morty) Justin Roiland, who often records this kind of scene while a little drunk.

Although these two readings might seem diametrically opposed, they don’t contradict one another at all. You have to understand both their points to see why the show fails. Yes, Rick and Morty has better instincts than its most toxic fans. Yes, the Szechuan sauce joke was meant to paint Rick as a miserable jerk who can’t find happiness through sheer intellect alone. It’s also an extended scene of playing child abuse for laughs, and that’s the clincher: The show is endlessly fascinated by the pain of the smart sad man while finding the pain he inflicts on others to be hilarious.

There are any number of comparisons you could draw between Rick and Morty and its influences in Western animation. Maybe the Szechuan sauce scene can be traced back to Homer strangling Bart, or the “Oh my God, they killed Kenny” joke, or the endless stream of rape jokes in Family Guy. I’m going to go outside that box and talk briefly about David Lynch’s film Blue Velvet, just to show that this argument holds water even when applied to a very different story.

Blue Velvet is a noir film about straight-laced American lad Jeffrey uncovering a vast criminal conspiracy—well, sort of. It would be more accurate to say that it’s about Jeffrey getting drawn down to that world by the immoral temptations of taboo sex and violence. It isn’t a portal-hopping sci-fi adventure, but it does spend a lot of time reveling in the seeming coolness and edginess of this dark world. It encourages the audience to enjoy the indulgence—right up to the point that Jeffrey hits a woman in the middle of sex.

This is the moment where what was once edgy and cool becomes immediately, irrevocably monstrous. Jeffrey is disgusted with himself, and the audience is expected to share that disgust. Most importantly, the turning point isn’t just about Jeffrey being sad or not living his best life (although it is also that). What triggers the turning point is his compulsive violence, his harming of another person. The film isn’t just interested in Jeffrey’s pain; it’s more interested in what we owe to each other. 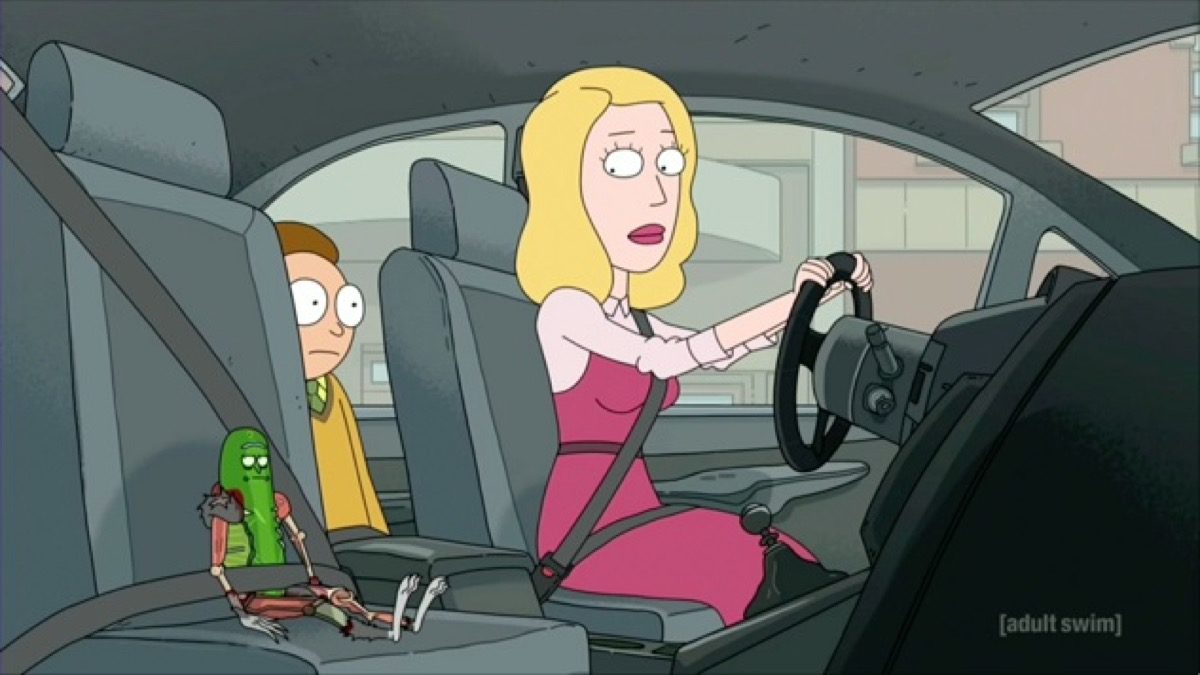 Rick and Morty does, to be fair, have some turning points like this. “Pickle Rick” has the scene where Rick finally crawls into therapy, and all the preceding action-movie coolness is exposed as pathetic. But, as discussed, these scenes always center on Rick’s pain rather than anyone else’s. Further to the point, the show badly struggles to commit to these turning points.

One week, Rick’s cool edginess is exposed as hollow and pathetic. The next week, the clock is reset. We’re expected to view him as cool and edgy again. The show got better at avoiding this with its more focused third season, but everything up to that point was a shambles. How can we take the show’s attacks on Rick seriously when they’re immediately followed by a goofy parody of The Purge with Rick back in funny-smart-cool mode? The show touches upon Rick’s serious character flaws, then dances away from them. The ultimate impression is that Rick is a bad person, but it doesn’t really matter.

It’s a shame, because it’s not as if there aren’t good jokes along the way, but I don’t have much patience for a man delivering the same tight five about how bad of a person he is over and over again for years without improving. If I wanted that, I’d just listen to one of Dan Harmon’s podcasts.