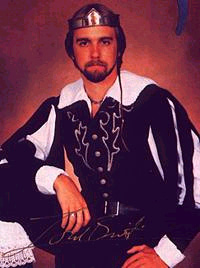 Richard Garriott, otherwise known as the famous Lord British, creator of the historical Ultima, announced at South by Southwest that he is working on a new online game set in the world of Britannia, under the guise of Lord British. Why didn’t he just say he’s working on a new Ultima? He doesn’t own the license, as Electronic Arts still has that under their thumb, which has technically prevented Garriott from pursuing an Ultima revival, until now. Garriott has retained the rights to Lord British, his Ultima persona, and is planning on using that as a cornerstone for a new online game, with the tagline “Lord British’s new Britannia awaits…;” Britannia being the fictional main land in which Ultima is set.

So, Lord British and Britannia? It seems like we’re going to be revisiting gaming history. The one thing a little scary about his new game, which is currently very light on details, is that it’s poised to be a social network game, though Garriott at least seems to understand the stigma associated with those three words, saying “The virtual world game is not just an ultra-light MMO shopped on social media. I think that would be a failure.” Garriott is currently looking for investors, which shouldn’t be too difficult, based on who he is and the potential of what he’s shopping.

Why is this important, one may ask? Garriott is old school, and basically created the first successful ancestor of the modern MMO, but if that weren’t convincing enough, Garriott returning to Britannia as Lord British is like saying Shigeru Miyamoto will be returning to the land of Hyrule as a character named Link, or the Mushroom Kingdom as an Italian plumber after years of absence. Garriott returning to Britannia as Lord British is like when a monumental band reunites and starts working on a new album–it has fantastic potential, but there’s still some cautious optimism floating about, because who knows if the band still has the magic. At least Lord British will still have the British.