"If you'd asked, I would've given you a nicer picture." 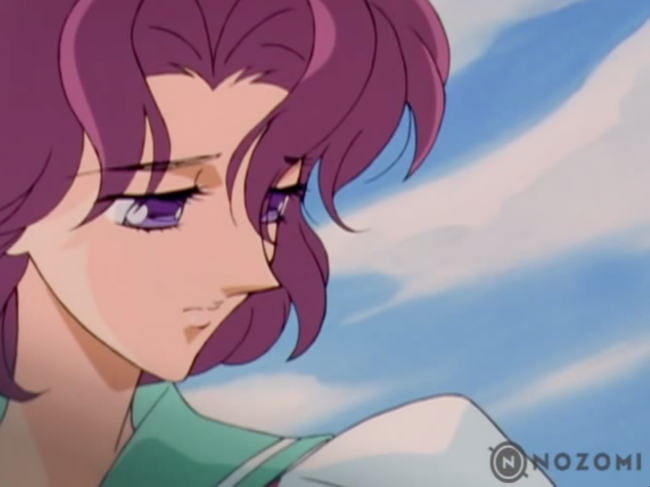 When the Black Rose trials began, and the intent of Souji and Mamiya became clear (to use the student council members as literal weapons), there was only one thing I could think of: JURY DUEL. While this episode didn’t quite live up to that initial expectation, I suspect that what follows will come through in a momentous, terrible, amazing way.

Which doesn’t mean this episode was a true disappointment. It begins with a refresher of Jury’s beef with Utena—the latter’s insistence in miracles, which echoed something that a long-lost friend of Jury’s had once said. That friend betrayed her, seemingly by stealing the man Jury loved, yet it’s the friend’s photo Jury keeps in a locket around her neck. She reminisces on her feelings about miracles, love, and feeling (or rather, not feeling) in the greenhouse, surrounded by orange roses; curiously, Anthy observes her in the act. (Aside: the last time I peeped at a recap’s comments, several people expressed that my feelings about Anthy’s “off”-ness are on. This makes me happy and also scared.) (Also: I wrote this entire recap up while listening to Radiohead’s “Daydreaming.” Do yourself a favor and loop it while you read.)

During a fencing practice, Jury is absolutely killing it. (And could probably actually kill a lackluster Miki.) Utena, observing, marvels at how much the captain has improved, but then a surprise new onlooker arrives: Jury’s old friend.

Shiori Takatsuki is her name; she’d moved away following the Jury incident, but just so happened to move back! In a conversation with Utena, she reveals that Jury and her had grown up really close together, calling Jury her “only real friend.”

In the Black Rose basement, Mamiya cuts his finger on an orange rose thorn. Souji sucks the blood off (oh my god), only to realize that Mamiya had pricked himself on purpose to make a metaphor point: the rose is ready to be plucked, if only for those tricky thorns. How do you pick her? By introducing a parasite.

During a student council meeting, Nanami holds a hearing as to Miki’s report on Kanae and the Black Rose group. She doesn’t believe him, and instead inquires about him: why he’s constantly stopping his watch (no response), and what it felt like to have the sword torn out of him (a very furious blush).

Jury leaves the meeting, and then Shiori finds her and tries to plead her way back into Jury’s heart. Jury isn’t quite ready to fully accept Shiori’s apology, but she does say that she has no more hard feelings and that she never loved the man in the first place.

To which Shiori rather rightly asks, who’s in Jury’s locket? Jury walks away…

…and bumps into Utena, who nosily asks if the two had made peace. Jury calls Utena and Shiori both “cruelly innocent,” and asks the pink-haired girl to stay out of her personal business.

Utena complains about this to Akio, who compares her to Ganymede. Unlike his weird moon metaphor, this comparison is apt; Ganymede is naïve in his position of favor with the gods, and while the harsh feelings he invokes aren’t spurred by his own purpose, his blindness to them only heightens the harshness of the feelings. This, as we soon see, applies not just to Utena and Shiori, but also to Jury.

Jury goes to take an Emotionally Cleansing Shower, but is plagued by flashbacks of Shiori’s insistence in belief and miracles. In the basement, the orange rose begins to wither. The next day, Jury flings the locket into a lake.

Shiori, who’s metaphorized throughout the episode as a small bird, comes back from class to a spooky dorm room; the door’s flung open, the window’s open, and a vase of orange roses is spilled over… to reveal Jury’s locket.

Cut to: Nemuro Memorial Hall. In the elevator, Shiori confesses that she’d actually always hated Jury, whom she saw as always the shining star: beautiful, popular, talented. While she’d actually loved the man who’d been the third wheel of their tricycle (I know, corny but apt!), she mostly stole him to spite Jury.

Shiori had thought that Jury pitied her less interesting, exciting friend, but after seeing her photo in Jury’s locket, she feels that she’s “beaten” her: she’d wanted what Jury had, but all Jury had wanted was her. They’re equals in their one-sided affections, but Shiori has the “advantage” because her feelings are ultimately centered around herself; Jury is the one seeking affection from another. 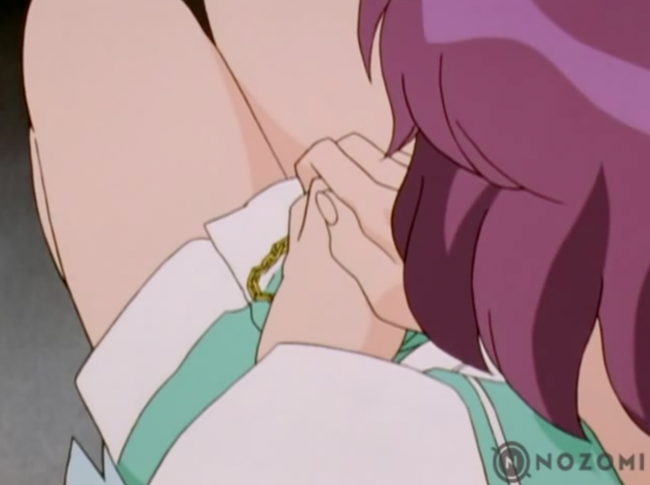 But through Shiori’s mean girl laughter at Jury’s plight, there’s fear, expressed in her late-elevator interview musings: “It’s no use! It’s just no use! Why do you look at me like that?! Why?!” Her own feelings aren’t as clear as she’s making them out to be in the confessional, but it’s too late. She’s turned by Souji and Mamiya, and she invokes Jury’s sword in a violent but beautiful scene.

Utena receives her dueling invitation in her locker. In a pretty transparent Shadow Girls skit, one of the girls is in tears over her great secret, revealed: she wears three pairs of woolen underwear. While the other plays the helpful angel, telling her that the secret isn’t that embarrassing, the “other” plays the mocking devil—but the devil is played by the same girl as the one revealing the secret. (Utena’s audible: “Take em off?”)

At the arena, the desks are now topped with little birds. Shiori is the insidiously-crystalized version of her elevator self: “The one who controls Jury is me,” she crows; self-realization twisted into “triumph.” Though she has no personal beef with either Anthy or Utena, she seeks the Rose Bride’s power regardless, a first for any of the Duelists, this arc and from before.

(Aside: after seeing the brutal Jury sword extraction, it makes watching Utena’s ritualistic extraction of Anthy’s sword very strange. In its own way, it’s a metaphor for consent—willing vs. unwilling, selfish revenge vs. selfless offering. But of course, this all depends on the idea that Anthy/the Rose Bride is getting more than just physical protection from Utena.)

It’s a tough fight, because Jury is a boss, but Utena invokes her prince and slashes Shiori’s black rose in pretty good time. At the end of the battle, all of the birds depart; their silhouettes pepper the screen over Anthy’s unmoved and unreadable face.

Souji jettisons another body, but curiously says that the parasite in Jury/maybe Jury and Shiori’s relationship is still there. This implies that he and Mamiya can use either woman again, which serves to double down on the gender dynamics. I can’t wait to see what happens with Nanami now. (Words I never thought I’d type.)

The next day, Utena and Anthy watch Shiori hang out with a new group of friends. Utena remarks how Shiori’s changed, but Anthy has a curious insight: “She hasn’t changed. Not a bit…”

As for Jury, her feelings for Shiori have now totally awakened, and despite Shiori’s clear avoidance of the before/after of the locket, the feeling Jury had been able to bury away under anger is bubbling up again. That’s the parasite: her feeling, and as that’s in motion, her rose is ripe for the plucking again, and again, and again.

I’m truly amazed at the extent the show takes to both dismantle and uphold gender distinctions and conflicts. The creators are clearly comfortable with showing homoeroticism, making the gender disparities that much sharper. While for most shows, this would probably be fumbled, Utena takes these ideas and follows through. Jury’s discontent continues to grow; Shiori remains in the picture. How will their story play out, and what precedent will it lay out for the future duels and Duelists to come? Until next time.

Tweet your thoughts on Episode 17 of Revolutionary Girl Utena to me here. This should go without saying, but NO SPOILERS PLEASE!