"I want to be a noble prince who saves princesses." 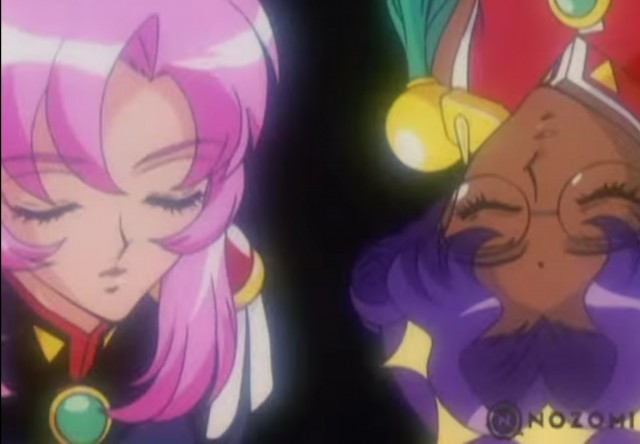 Hey TMS readers, you might recognize my byline as that of the person who does Newbie Recaps for Psycho-Pass. You might also recognize that in the title, it reads Revolutionary Girl Utena instead of Psycho-Pass. Why is that? Well, some of you tried to warn me in the comments sections of my Psycho-Pass recaps before, and I finally hit the point where I understood.

Psycho-Pass is a very violent show — in the first episode, we get to watch multiple peoples’ bodies explode in Akira-like levels of detail. Now, it’s easy to get around that kind of violence (and after all, I’ve seen Akira; hell, Gravity Falls also has some truly grotesque body horror and that’s technically for kids) (that said, I love Gravity Falls!!!), but where things really started getting twisted is when the Big Case began, and the violence took on reeeally uncomfortable sexual overtones. Given that TMS is not a fan of that, and given that I personally truly find hypersexualized violence uncomfortable, I decided to drop Psycho-Pass and take on something completely different. 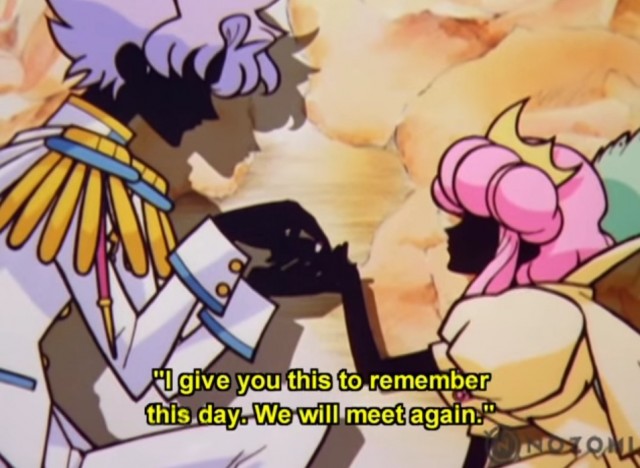 All I knew about Revolutionary Girl Utena before watching the episode is that 1) it’s famous for its hyper-queer over/undertones, and 2) its animation is gorgeous in that old-school way (courtesy of animator Kunihiko Ikuhara, who also worked on the old Sailor Moon). Both things, as I learned from watching the first episode, are true.

The story begins as a typical fairy tale: An orphaned princess is visited by a beautiful prince, who gives her a rose-engraved ring and promises her that he’ll return, and they’ll meet again in the future. However, the twist in RGU is this—that the princess isn’t interested in waiting around for her fate to arrive. Or rather:

“This was all well and good, but so impressed was she by him, that the princess vowed to become a prince herself one day.” 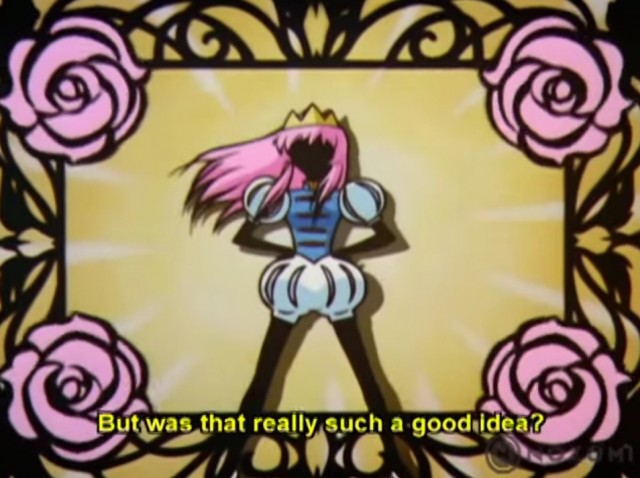 From there, the series flashes presumably forward, to the setting of Ohtori Academy. From the start, we’re shown a rarefied, vaguely aristocratic world, populated by uniformed students and strict rituals.

That is, except for the case of Utena Tenjou, whose introduction has the framing and tone of the “Popular Protagonist”—she wears a boy’s uniform instead of the girls’ sailor dress, and she’s all the more adored for her independent streak. 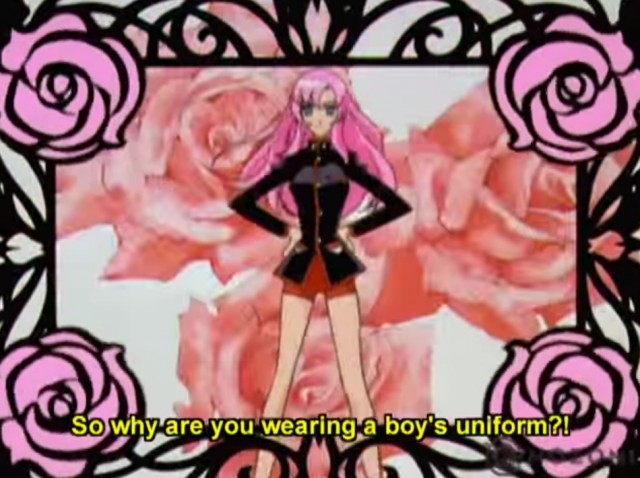 Also: Check out the pose, which mirrors that of the princess-who-wants-to-be-a-prince. HMM, WONDER IF THERE’S A CONNECTION BETWEEN THE TWO.

Utena isn’t just daring with her uniform fashion: She’s also an athletic competitor, who’s able to beat the boys (with the screaming girls’ populace backing her up). Her masculine-coded confidence is undercut by the softness of her framing; even as she dunks on the dudes, she gets the shoujo “shower of rose petals” treatment. 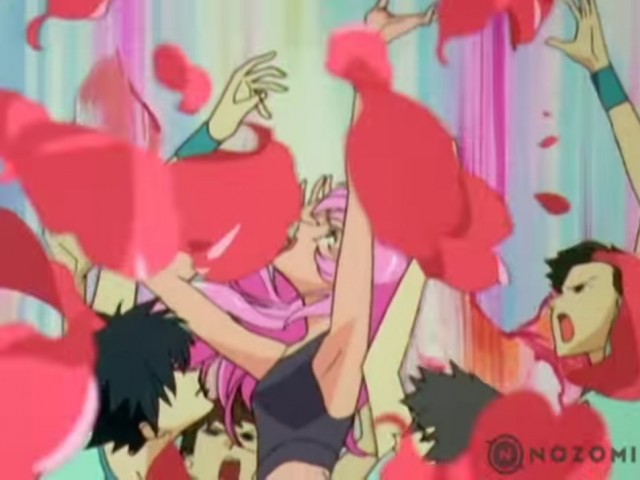 Not pictured: A chorus of screaming girls in the background.

As Utena goes along her day, something catches her eye: Another student, and the scent of roses, whose smell holds significance in her memory and whose flower shape is embedded on a mysterious ring she wears. WONDER WHAT IT COULD ALL MEAN? (She literally says, “Why does the scent of roses always make me think of the past?”) 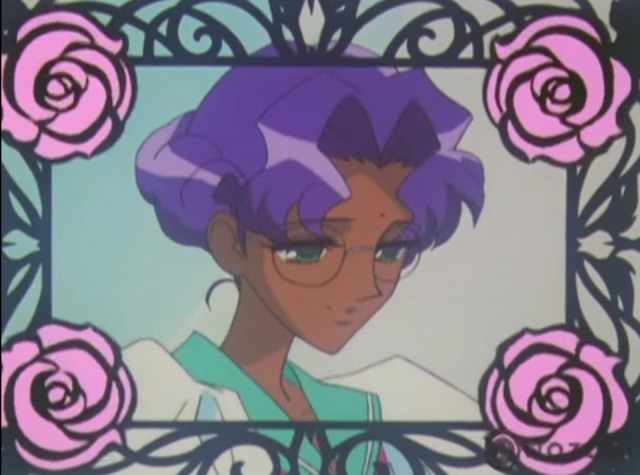 Slightly unrelated: This rose border is great, and boy are the Sailor Moon similarities strong.

Alas, this beautiful bespectacled girl is being badly mistreated: Some jackass green-haired man (lol anime hair) slaps her! In the face! As Utena surreptitiously views the exchange, and then prepares to fly across the room and kill him, another figure enters the scene: A red-haired man, who stops the green-haired man from hitting the glasses girl again. Hoping to start getting some names for these characters so that you don’t have to ID them by their ~*helpfully diverse*~ hair colors? 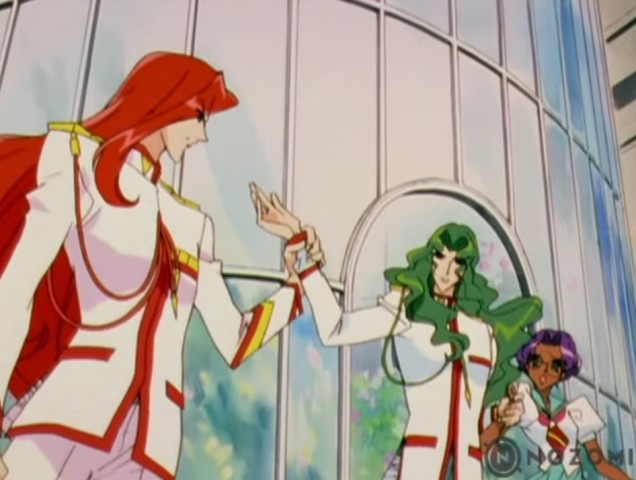 Yet another Sailor Moon similarity.

Me too, and the episode helpfully offers names and explanations up via a conversation between Utena and her friend/”girlfriend?” Wakaba. (Earlier in the episode, Wakaba had referred to Utena as her boyfriend… if I’m missing something, let me know.) Also, the former runs up and straddles the latter in this manner: 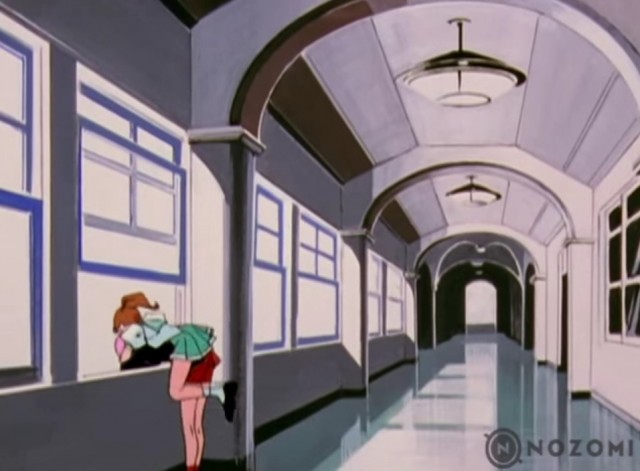 Then, weirdly enough, the show actually takes it upon itself to answer some of these questions. The student council is shown to be a body of (unnatural hue-haired!) unusually serious students, who chastise Saionji for hitting his bride—

Hold up. Anthy is his bride. (Actually, the Bride.) Saionji is engaged to her and thus can treat her however he wants? Dueling is somehow involved with this? 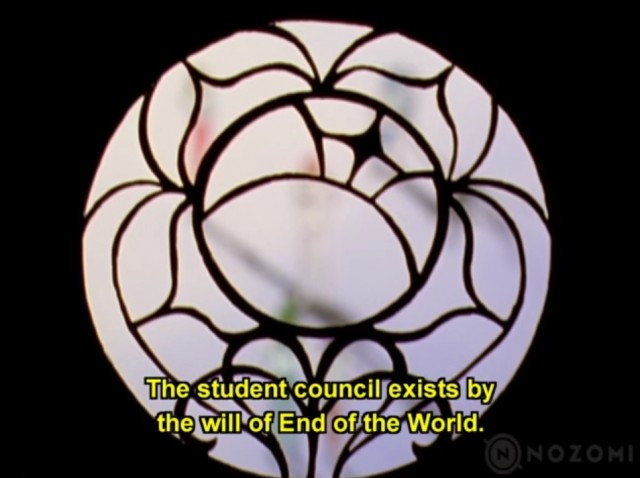 Also, the End of the World is referred to as a “he”—figures.

Saionji ignores Kiryuu’s warning that a new duelist is on their way to challenge him, but until that happens, Anthy’s still under Saionji’s control; though his actions anger the rest of the group, none of them step in to help her or actually check Saionji’s actions. Yet, things are about to be shaken up.

Utena and Wakaba are walking the hallways when they notice a group of boys laughing at something. Sensing that something is wrong, Utena goes into the crowd and sees what they’re laughing at: A publicly-displayed love letter to Saionji. Utena mercilessly rips apart the gathered boys… 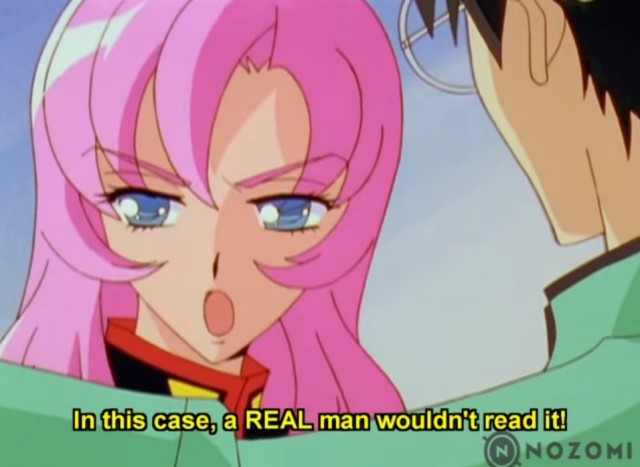 …but then she sees Wakaba tearing up, and realizes that her friend’s the one who wrote the letter, making the injustice of it all that much worse. Given Saionji’s earlier actions against Anthy, and the fact that Wakaba gave the letter to Saionji, Utena puts two and two together and goes to confront Saionji about his asshole behavior. He, predictably, acts like an asshole, so Utena grabs a kendo stick (as Saionji is the president of the kendo club), and challenges him to a duel. 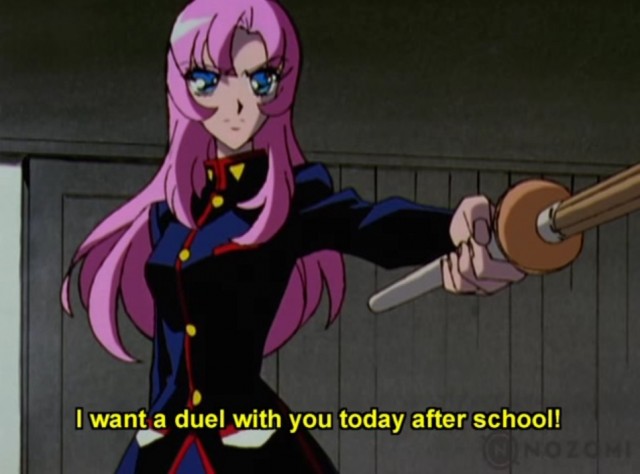 “So you’re the challenger”—what does this all mean??? 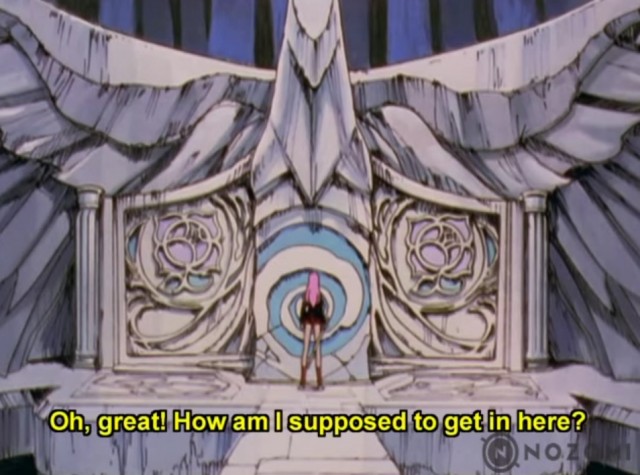 Personally, that’d be the least of my worries.

But then, Utena’s mysterious ring comes into play: A prick of water leaps from the door and lands precisely on the ring’s rose sigil, and suddenly the doorway evolves like a stage change in Super Smash. (I have a limited vocabulary for comparisons.) After a beautifully renders, pretty bewildering sequence, Utena enters through iron rose-motif gates and up a drill-like staircase.

Set to a vocal chorale track, which essentially narrates Utena’s motivations and goals (a feature of the show, apparently), Utena ascends to her dueling ground, which is literally overshadowed by a giant upside-down castle. What’s up with this Another Earth-esque situation? Hmm, could any of this have to do with the opening fairytale sequence??? 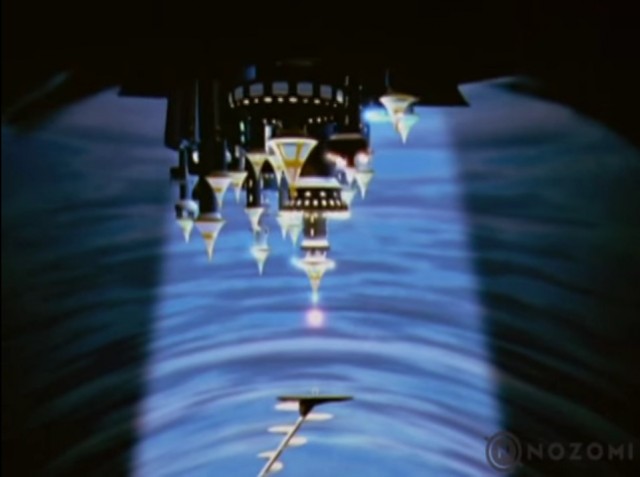 Utena confronts Saionji on the battle platform, where Anthy places roses on both of their lapels: The winner is the one who knocks the other’s rose off. Utena is raring to go, but then Saionji riles her up further by slapping Anthy again! All because she wished Utena good luck! And, he tells Utena that he’s both Anthy’s betrothed and her owner, because he’s the reigning kendo club captain and she’s the Bride who belongs to him! And then, before the duel itself begins, Anthy invokes “Dios” in a super Magical Girl TM sequence, which concludes with Saionji pulling a sword out of her chest! Man, what an asshole! 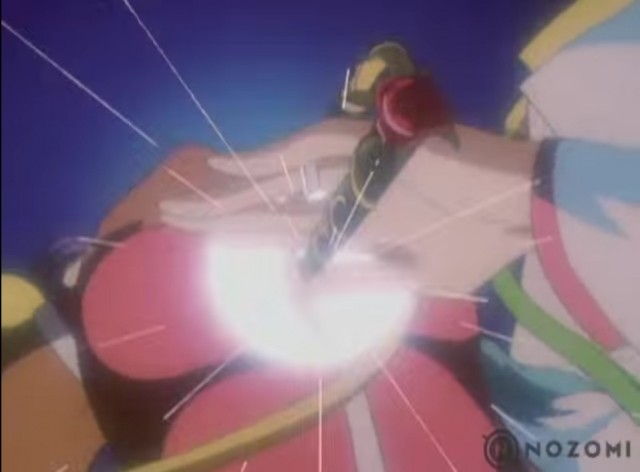 “Holy shit!!!”—Utena and the viewers

Armed with the Sword of Dios, Saionji taunts Utena, who’s armed with just a wooden kendo sword. Furious at Saionji for his trickery and for his terrible treatment of Anthy, she goes after him. He acknowledges that she’s “pretty good for a girl,” which makes her even angrier, but alas—he slides her sword to its hilt. It’s over for Utena… or is it???

As Saionji prepares to take her out (not in a death way), she has a vision of the prince from the fairytale, in which he reminds her/she has a flashback, that they’re destined to meet again. Weirdly enough, the prince looks like the dude version of Anthy!!! 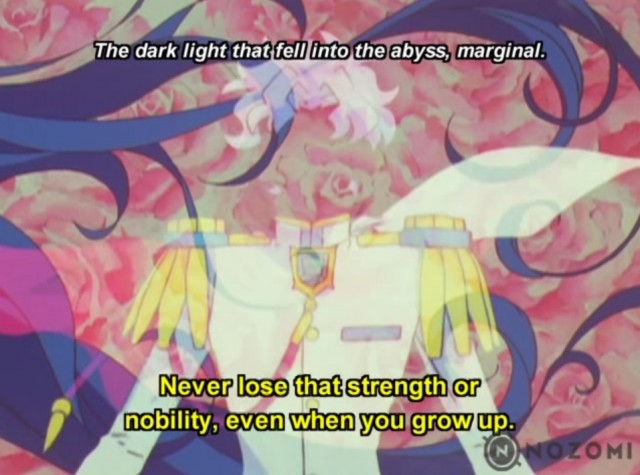 There are no coincidences in this show.

With this newfound remembrance, Utena charges Saionji—and somehow manages to knock his rose into pieces. Victory is Utena’s! And from far away, Touga says (at least in the sub), “Oh yeah, baby… you’ve lit up the fire in my heart.” Is no one in the student council normal?!

As Utena leaves after a very eventful day, she’s approached by a non-Bride Anthy—who nevertheless says she’s now Utena’s to command. Though the face value interpretation of having the only obviously POC character be constantly referred to as a “slave” seems a bit weird, to put it lightly, hopefully this is just a weird translation on the part of the sub group. 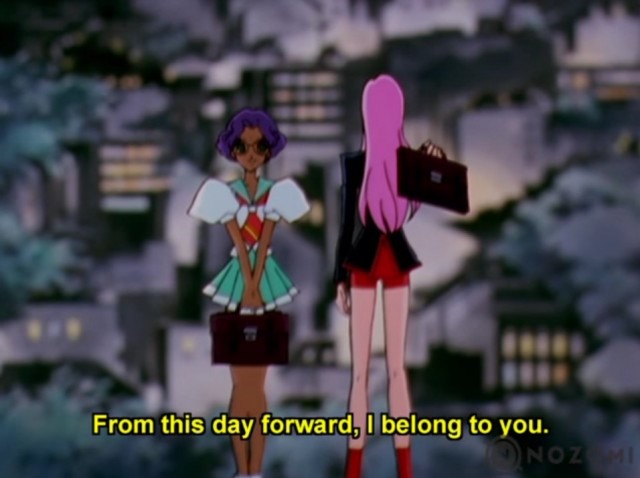 How will Utena deal with this turn of events? How do Anthy and Utena connect to the prince and princess of Utena’s memories? Who is the End of the World? What is the student council doing, and how do Anthy and Utena play into that? Here’s to 38 more weeks of recaps to find out.

Tweet your thoughts on Episode 1 of Revolutionary Girl Utena to me here. This should go without saying, but NO SPOILERS PLEASE!