Don't just use your ktichen sponge though, bad idea 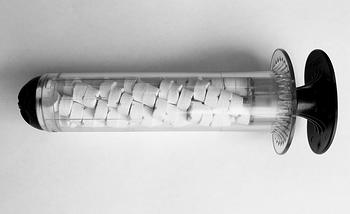 This pocket-sized, sponge-filled syringe may look flimsy, but a team of developers from Oregon company RevMedX say it’s our greatest hope yet for saving civilians and soldiers alike from blood loss.

Veteran and co-creator John Steinbaugh has seen first-hand how quickly gunshot wounds can hemorrhage. Blood loss is the leading cause of death in armed conflict, and he describes traditional gauze dressings as insufficient and excruciating.

Enter XStat, a syringe filled with coated sponges that RevMedX says will easily stop hemorrhaging and seal a wound in just fifteen seconds.

The team settled on a sponge made from wood pulp and coated with chitosan, a blood-clotting, antimicrobial substance that comes from shrimp shells. To ensure that no sponges would be left inside the body accidentally, they added X-shaped markers that make each sponge visible on an x-ray image.

The sponges work fast: In just 15 seconds, they expand to fill the entire wound cavity, creating enough pressure to stop heavy bleeding. And because the sponges cling to moist surfaces, they aren’t pushed back out of the body by gushing blood.

Confirms Steinbaugh, with XStat,  “By the time you even put a bandage over the wound, the bleeding has already stopped.”

XStat has been tested on pigs-if you’re squeamish, you’ll be relieved we didn’t show those images instead.

The syringe is used to get the sponges as close as possible to the artery, and was originally inspired by Fix-A-Flat Foam for tires. The Army has given RevMedX $5 Million to continue to develop their powerful little syringe, and XStat is now awaiting FDA approval.

Even though XStat might sound like part of a horrible buzzfeed post (what common household products are you not using to stop hemorrhaging that you should be?) it is pretty amazing that one day your life could be saved by simple, intuitive, easy to use sponge technology, and pretty strange that it was all inspired by flat tires.

(Popular Science via Gizmodo,images via RevMedX)