In Living Color: The Revival of Photon and Nubia Is an Important Elevation of Black Heroines 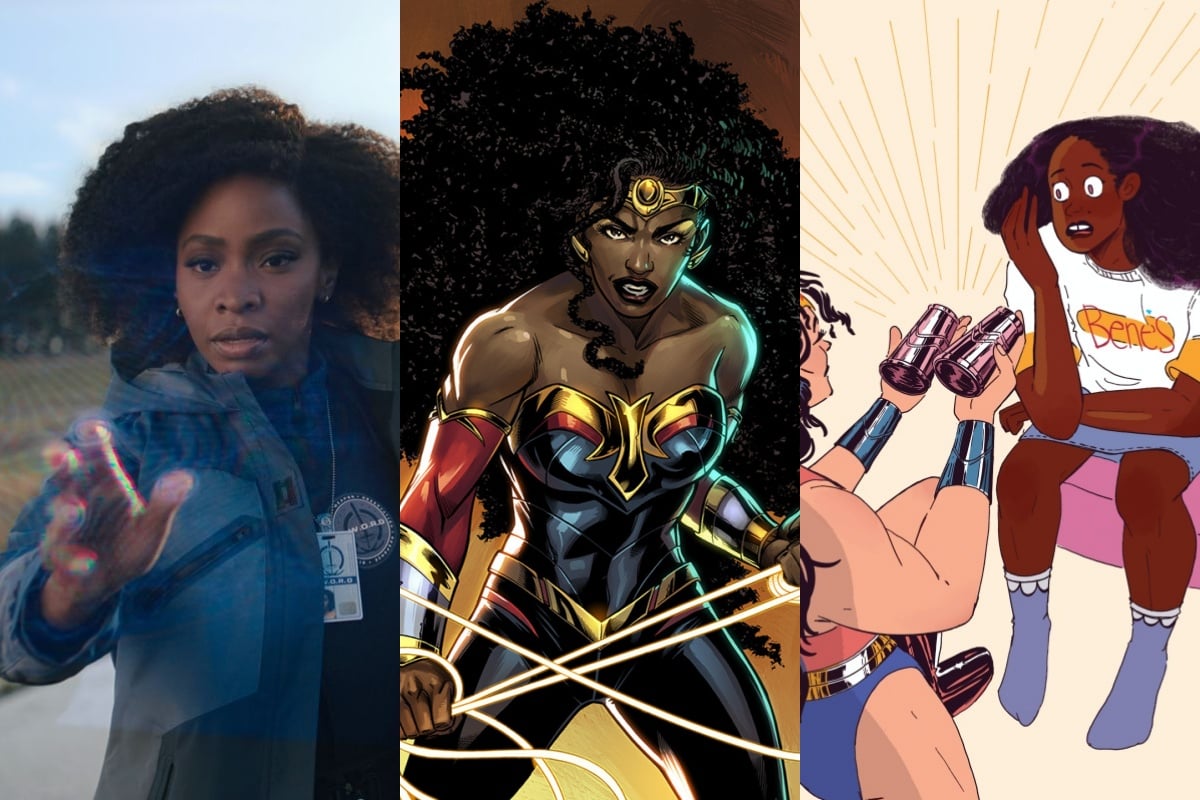 As the age of heroes unfolds in 2021, we have seen the revival of DC’s character Nubia, as well as the first live-action depiction of Photon/Captain Marvel. Both are groundbreaking.

Author L.L. McKinney has been at the forefront of bringing Nubia back to the comic book realm both in Nubia: Real One and in Immortal Wonder Woman, the Future State series from DC comics that launched earlier this year.

My fellow Mary Sue writer Briana Lawrence wrote an impeccable piece about Nubia: Real One yesterday, and all I will add is that, as someone who has been familiar with the character of Nubia for years, it has been incredible seeing her be highlighted in this way. Her origin as the twin to Diana Prince has always been oddly handled in some cases, but McKinney brings it to light, illustrating that Nubia is Diana’s equal in every way.

Their sisterhood is real, even though it is complicated. I love that reminder, and for those unfamiliar with the character’s long history (she premiered in 1973, after all), Nubia: Real One run allows them to see it handled by the loving hand of McKinney, with Robyn Smith’s fantastic artwork to bring it all to life.

In Immortal Wonder Woman, we get another layer of Nubia with McKinney’s writing. In this, we see Nubia has taken up the mantle of Wonder Woman as Diana rules Themyscira, and they aren’t on speaking terms. Nubia is protecting the Earth, but the background characters are already showing the richness of the world building, with her going to Aunt Nancy (a.k.a. Anansi) for guidance.

Anansi is one of the most important figures in West African, African-American, and Black Caribbean folklore, and by including that character as a literal auntie in this comic, it is just one of the impeccable ways that see Nubia’s story flourish with Black specificity under the hands of a Black author.

Moreso, work has been done to honor Nubia as an Amazon Princess, while also allowing her to be a Black woman with a rich mythos within that identity. It is a really beautiful thing to read, especially cause she also kicks lots of ass.

With Marvel and Disney+’s WandaVision, one of the most unexpected delights has been watching Monica Rambeau go through one of the best hero origin stories in the Marvel Cinematic Universe as Teyonah Parris kills every moment.

When Captain Marvel came out and we saw the casting of Maria Rambeau, we knew that Monica wasn’t far behind. In the comics, Monica was the second Captain Marvel before getting the later names Photon and Spectrum, allusions to the fact that she can transform herself into any form of energy within the electromagnetic spectrum.

Despite being part of Wanda’s story, Monica has set herself up as an empathic sort of hero. She understands Wanda’s grief and rather than acting with violence, she seeks to understand the person apart from this entire hex situation. In the latest episode, when we watched Monica pull herself together through pure willpower and sense of self, I got goosebumps.

Marvel and DC have both yet to give us Black female superheroines on the big screen, but in the comics and television, it is proving that there is a hunger to see these female legends from comics be given their flowers.