The Unapologetic Blackness of 'Nubia Real One' | The Mary Sue 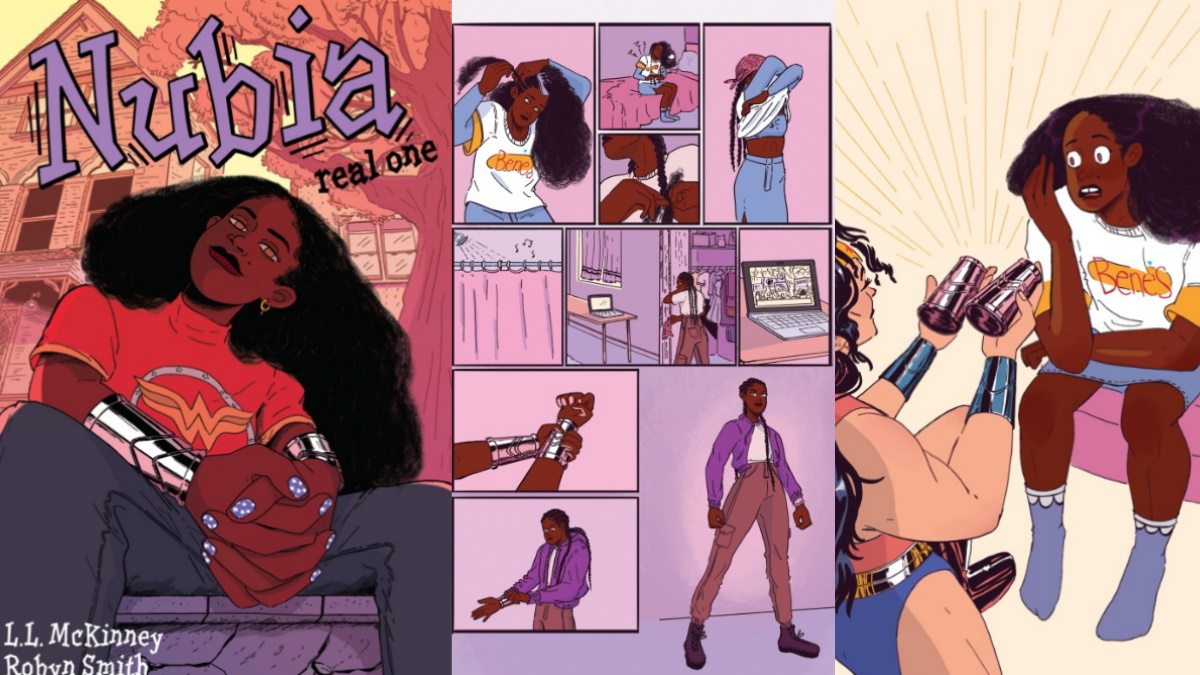 I’m not even gonna try and approach this in some calm, collected manner, because Nubia would want me to fully embrace the joy I felt when I read this. Nubia Real One is SO good and SO Black, y’all, right down to the way Nubia and her friends talk to each other.

Trying to collect all of my feelings about this new graphic novel from DC is hard because what I really wanna do is lead everyone to the nearest purchase link, tell them to read it, and fangirl for hours about every single detail of this book.

The adorkableness of being a Black teenage girl with a crush. The times in your life where you played matchmaker for your besties because they clearly need to hook up. The moments in the story where my inner art geek delighted in cool shifts in tone, like how Nubia’s flashback where she revealed her powers had everything in monotone colors except for her.

The topics that make your heart hurt because they’re extremely relatable and you were NOT prepared.

Before I get into everything I wanna start with a huge thank you to writer L. L. McKinney (A Blade So Black) and artist Robyn Smith (Wash Day and the upcoming The Saddest Angriest Black Girl in Town). As a Black writer who’s been told to watch how your characters speak so they can be “understood” (aka: so white readers wouldn’t scratch their heads about us) having an entire DC graphic novel with sentences that sound like my community means so much to me. I needed this when I was in college, taking writing classes, and being side-eyed for daring to have my characters drop letters when they speak because I drop my “r’s” when I say things like “car” or tell people how I’m finna go to the store.

But it’s not just the dialogue that hits me, it’s the story itself, and the way that it doesn’t try and hold anyone’s hand to explain itself. There’s no need to explain why there’s a Black Trans Lives Matter sign at a protest or go into huge amounts of plot exposition about the animosity between the Black community and the police. It’s there because that’s how things are, more so than ever after 2020, and there’s no moment where the narrative feels the need to give a history lesson or have that annoying knee-jerk reaction to coddle allies while telling this Blackity Black story.

Nubia Real One isn’t out here reassuring “good” white folks that they’re a-ok, hell, even Wonder Woman herself acknowledges that she will NEVER fully understand what Nubia’s going through.

So thank you. Seriously. It’s so important to have books like this, ESPECIALLY for Black creatives who I know are waffling on whether or not they can be as Black as they wanna be.

I see you, Black creative wondering whether or not that girl’s mama sleeps in a hair bonnet. She does, and that imagery is now in a DC property.

Now let’s get into this story.

Spoilers for Nubia Real One.

From the preview images I saw weeks ago and the synopsis, I had an idea of what to expect: Black girl struggling to become the heroine she’s meant to be because society has thoughts when it comes to Black women. However, the story wouldn’t focus solely on this, and we’d have a balance between Nubia’s struggles and her day-to-day life as a teenager with friends who “peer pressure” her into getting out of the house.

I’m delighted to say that this is all true, the story is very much what I thought it was going to be, but there’re so many details I wasn’t expecting that make it more fulfilling than I ever realized it would be.

Nubia Real One doesn’t shy away from the issues that Black girls face, and have always faced, in our society. I expected this. If you’re looking for some sort of heroic escapism this book ain’t it, but really, that’s what makes this story so interesting to me. Sometimes, I do want escapism from the world’s nonsense, but other times I’m absolutely in the mood for a story that asks, “How would our society treat a Black girl in the midst of becoming her own kind of Wonder Woman?”

The hard truth to swallow is that folks wouldn’t be kind to her, even if they’re in need of saving. And really, hero stories have always played with this idea of how ordinary folks would view super-powered beings, how they’d “other” them and have debates on how they should be treated even if all they wanna do is live their lives in peace.

The extra layers we get because of Nubia being a Black girl were enough to make me have to stop and take a breath, because Nubia’s main adversaries, when you break it down, are the exact same adversaries Black women have to deal with anyway.

How can we even get to the part where Nubia faces some criminal menace when the very people she wants to protect have it in for her based solely on the fact that she’s a Black girl who dares to occupy space? Nubia has to deal with that, first and foremost, because that’s something that’s gonna get in the way.

Honestly, Nubia is exactly what we’re talking about when we say that having a Black character shifts the narrative. The Black experience is gonna be way different in these “hero coming into their own” stories. Sure, the cops might side-eye Wonder Woman, but straight up arresting her because she “fits the description” of some robbers she herself stopped?

It’s frustrating. It’s heartbreaking. It’s absolutely truthful. Nubia can’t be that heroine who immediately takes flight because society won’t let her, which is why she’s told to stay in hiding … while also encouraged to be herself.

This message right here? Sounds contradictory as hell, but when it’s delivered by Nubia’s two Black mothers you know it’s coming from a level of parental concern that’s too painful to describe. It brought me back to conversations with my own mother who constantly applauds my vocalness, but with the increase of Black names trending, footage of their murder shared on social media with zero trigger warnings, she couldn’t help but express concern.

And that’s just from me being a Black woman, I haven’t even touched the fact that I’m a queer woman of color. Nubia does, though, because her mothers are queer Black women, and that intersectionality adds this unspoken extra layer of fear for their child’s well-being.

To this day I still remember my mom calling me after the Pulse nightclub shooting and admitting that she worried for my wife and I’s safety. We used to travel a lot for work, and while she was happy we were doing a job we loved, she was worried that we could end up in a place where someone would attack us because we have a rainbow flag on the back of our car.

Our mothers are proud of the women we’re becoming and how we don’t stand for the bullshit, but damn do they wish we didn’t HAVE to.

It hits so hard because all of it is clearly calling back to real-life incidents. Whether it touched on my fear of Nubia ending up like Sandra Bland when that cop handcuffed her, the protest of the child who was killed by cops (Tamir Rice was 12), or the fact that the violence that happens in the big protest was purposely incited by an entitled, abusive white boy who was trying to get back at Nubia. This, of course, creates the “protestors cause violence” narrative that we know isn’t true, and as someone who lives in St. Paul, Minnesota, all I could think of was the George Floyd protests that took place here, how they’d been mostly peaceful, and how others came to purposely incite violence.

And somehow, with all of these topics, Nubia Real One still finds time for friendship, crushes, and Black joy.

I am so in love with Nubia’s friend group. Quisha and Jason are such good kids, always there to remind Nubia to get out of her own head. They might be vocal about the need to seek justice for the wrongs against their community, but they’re also vocal about how Nubia should totally go to this house party with them before they go their separate ways for the summer. By the way, Nubia, girl, are you really gonna spend your summer WORKING?!

Basically, they have the kind of friendship I remember having with some high school friends where our families just assumed we were gonna be at each other’s houses all the time. Even so, those friends always had this annoying habit of identifying a crush and conveniently stepping away so we could be alone, just like Quisha and Jason do. How dare they, lol! Don’t leave me alone with my fast beating heart!

And Nubia’s crush? Oscar? Short. King. Energy. Nubia might be able to lift an entire ATM over her head, but that doesn’t make talking to the guy she likes any easier. He’s just as bashful around her, too, so I’m sure if Nubia passed him a note that asked him to check yes or no about going on a date, he’d say yes. I love that, even with everything else going on in Nubia’s life, there’s still room for her to awkwardly stand in front of her crush and try to make words come out of her mouth. Despite the hardships we face we’re more than our struggles.

Yes, society can be an absolute dumpster fire, but there’s nothing wrong with having positives to help you navigate through it. Nubia has a solid friend group, a cute boy, and two wonderful mothers who are there to hug her when things aren’t going well.

Bottom line? I can’t recommend this book enough. This is the kind of thing I’d want to show up in classrooms so Black girls can see a heroine who looks like them, faces the same hurdles as them, addresses the exhaustion of it all, and focuses on the importance of having slushies with friends … while praying for the ground to swallow you up when your crush smiles at you like that.