Tiana Is an Excellent Princess Who Deserves a Better Movie: Revisiting the Princess and the Frog 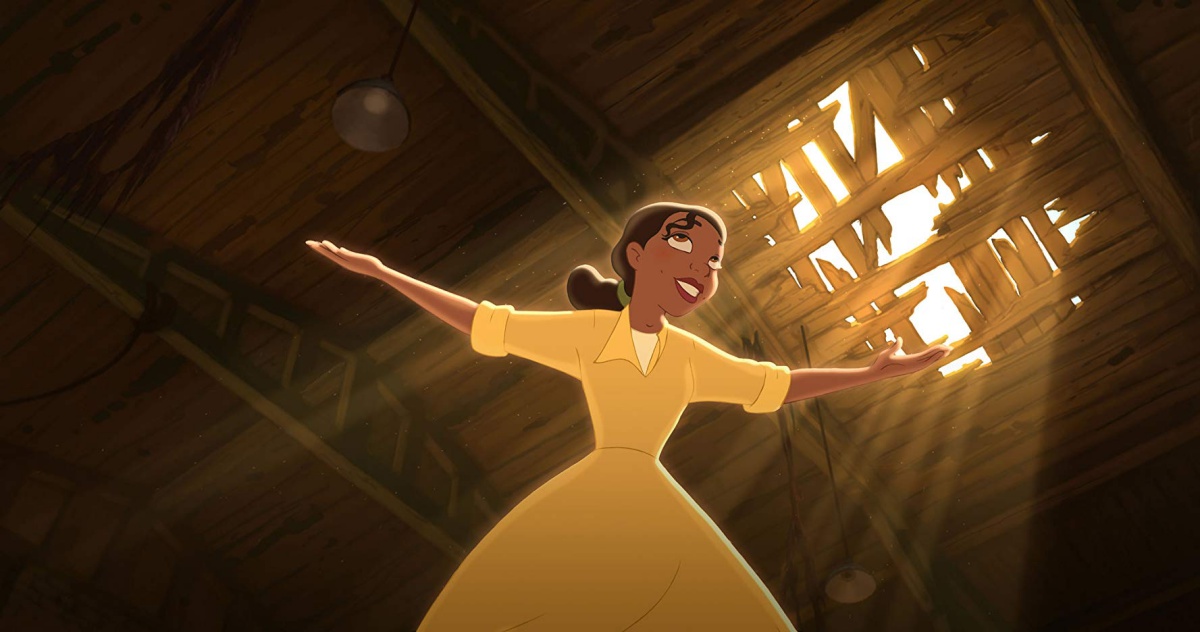 This Sunday was the nine-year anniversary of Disney’s The Princess and the Frog, which was notable for starring the first official African-American Disney Princess, and the only one of Black descent, Tiana.

2009 was the year we got both Tiana and Barack Obama, and Tiana had the unfortunate responsibility of being the Black Princess. I was a teenager when I first saw The Princess and the Frog, and due to all the Disney AMVs I made during most of my late teens, I’ve revisited the movie several times, and my opinion on it has pretty much landed at this point: I love Tiana, the setting, the baddie, and a lot of the music. As for The Princess and the Frog itself as a movie … it is meh.

That is, until the second act kicks in then, and then there’s no more character development for any of the female leads.

Instead, the character development and emotional maturation is in the storylines of King Triton, Aladdin, John Smith, and the Beast. Our female protagonists don’t have to develop, because the narrative frames them as having always been right from the beginning. It was the people around them who had to get with the picture.

The first exception to this rule is Mulan, where her storyline is all about her own journey to self-love and Shang being in love with her is just a side effect of her living her best life. Shang is already an emotionally developed person, who maybe has internalized some of the sexism of his environment, but in the end, he is moved to follow Mulan because of her bravery, which is explored in a handful of scenes.

Tiana, like Mulan, is one of the few Disney princesses to actually have to deal with her own insecurities and flaws. Her hardworking and singleminded nature is noble, but has kept her from forming the important friendships and bonds that really help nurture you in life.

Tiana wants to be a “strong black woman,” but what she doesn’t realize is that achieving that goal doesn’t mean stopping yourself from being open and loved. It’s actually reaffirming to see Tiana as a working person who actually pursues her own goals and dreams that aren’t just vague concepts of “freedom,” but also learning to take time to let other things into her life.

She is a modern Princess for a modern audience—until she becomes a frog for the rest of the movie.

Rewatching the film, as it began, I was really enjoying it. The animation is beautiful, and the first half’s series of songs is really solid. “Friends on the Other Side” is just a deliciously powerful baddie song, and Tiana is so beautifully animated in the hand-drawn style. I was on my couch thinking, “Wow, this movie is good. Why do I feel so weird about it?”

Then Tiana gets transformed into a frog, and the second act of the movie becomes filled with a collection of characters that I find to be … let’s just say “uninteresting,” to be kind.  Between Louis, the trumpet-playing alligator and Ray, the Cajun firefly in love with the star, they aren’t exactly Timon and Pumba. Even though Ray’s death is emotional, it doesn’t mean the character wasn’t obnoxious for most of the movie.

Tiana gets swallowed up in the comic slapstick narrative the movie dives into, which is supposed to be part of her character journey of learning to mellow out and not let life pass her by, but Tiana wasn’t an antisocial person in the first place. She had friends.

Also, Tiana learning to dance and relax isn’t an equal exchange for her basically teaching Naveen to be an emotionally competent person. While I enjoy their relationship, it’s also sort of frustrating to have Tiana’s story sidelined so that she can be part of helping her love interest be better.

Most importantly, instead of getting to see my beautiful dark-skinned dimpled African American Disney Princess in the best outfits the 1920s have to offer, she spends the majority of the film as a frog.

I was denied gowns! I wanted to see Tiana in some nice outfits, with some cool hairstyles, rocking both her natural and pressed hair, and we don’t get that. We got a damn frog for most of the movie, and it sucks because no one wants to watch a Disney Princess movie where the lead princess is a frog (unless, you know, she was always a frog).

Reading interviews with Ron Clements and John Musker, it seems like they both wanted to underplay the importance of having Tiana as the first black Disney Princess, but also wanted to be sensitive to what they were doing … except for actually getting a black person to write the story. The screenplay was written by Clements and Musker, and they received “guidance” from screenwriter Rob Edwards, who is African-American.

Throughout the entire movie, there is, at least to me, a palpable lack of blackness. You decided that you were going to do a Disney Princess story in 1920s New Orleans, with your first African-American princess, and you were just gonna lightly allude to racism and have Tiana be best friends with the white daughter of a sugar mill owner? M’kay.

If you love The Princess and the Frog, that’s fine. I love many things about it, but overall, it doesn’t give Tiana its best, and at least for me, she is the most important part of the film. Tiana isn’t my favorite Disney Princess, but I have a deep attachment to her because of what a young me would have seen: a Princess who looks like me.

Growing up, The Hunchback of Notre Dame’s Esmeralda filled that void—and really any Disney Princess with melanin—and I saw A Goofy Movie and Space Jam as black movies, but none of that meant that, growing up, I didn’t hear people say, “You can’t be a princess because you’re black.” So Tiana is precious to me because her existence means no one can say that to another little black girl again.

Yet, when I read the behind-the-scenes information and everything else around the character, I’m reminded that Tiana may belong to me in spirit, but she is a product of Disney.

After The Princess and the Frog came out, I went to the Disney store and bought a stuffed Tiana doll. The most amazing thing about it was that her hair was soft and cotton-like. It was the first time I’d ever felt a doll with hair that was like my natural hair, and it was on a Disney Princess toy.

That feeling was so powerful that, even at sixteen, I hugged it furiously. I bought it that day. A few years later, I went into the Disney store again, and I saw that the Tiana doll had changed: same green dress, but her hair was no longer cotton, now the same velvet-smooth material of all the other Disney Princesses.

They had ironed out her hair.

DisneyThe Princess and the Frog