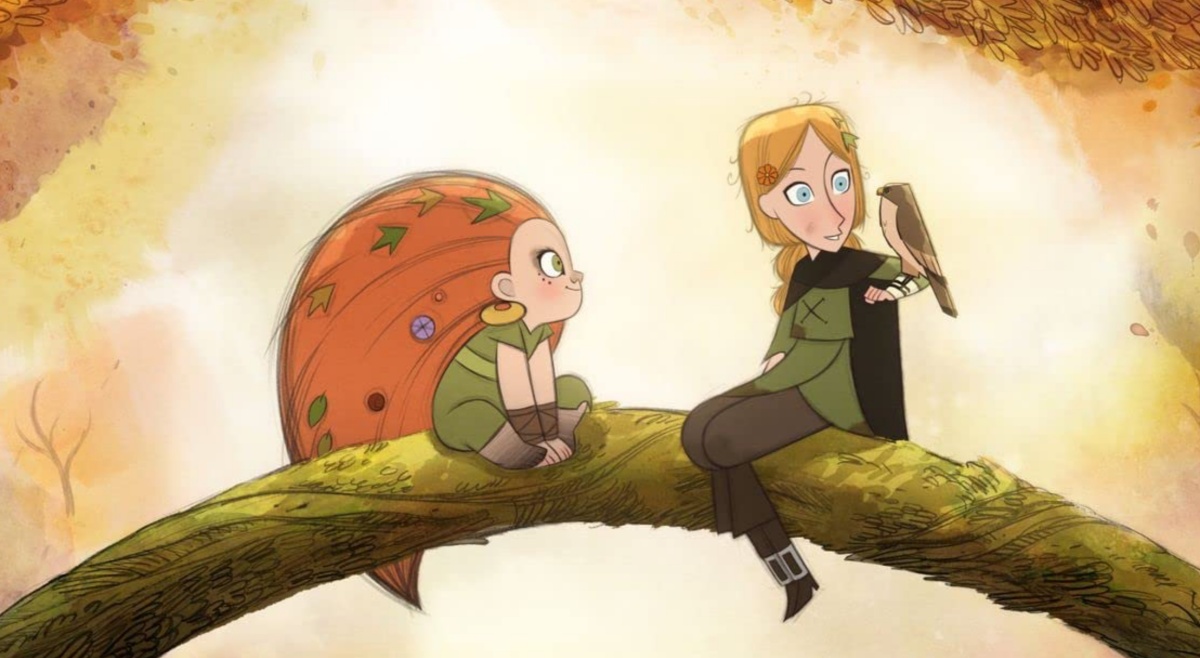 Wolfwalkers is the latest animated feature from Cartoon Saloon, an Irish film and television animation studio based in Kilkenny. They are responsible for The Secret of Kells, Song of the Sea, The Breadwinner, and now Wolfwalkers, a gorgeous and melodic film about the relationship between nature and humanity.

In 1650 Ireland, the residents of the town of Kilkenny have an issue with wolves, and with orders from the Lord Protector, a.k.a. Oliver Cromwell, to clear the neighboring woods for farming, they have no choice but to call in some … “English assistance.” Hunter Bill Goodfellowe (Sean Bean) and his young, rebellious daughter Robyn (Honor Kneafsey) have been brought from England to Kilkenny by the Lord Protector to help exterminate the wolves so the woodcutters can work. However, Robyn comes across a young wolfwalker named Mebh (Eva Whittaker) and realizes that the relationship between humans and wolves is a lot more complicated.

The art of Wolfwalkers is instantly engrossing, with its brush strokes, rich color, and lush backgrounds that fill me with nostalgia. While there is a lot of great work being done with CGI animation, I really enjoyed getting to see the 2D hand-drawn artistic choices in Wolfwalkers. It floods the film with a personality that makes it stand out. Along with the music. Norwegian singer-songwriter Aurora, who you might remember from Frozen II, and one of my personal favorites, contributes to the soundtrack, and Maria Doyle Kennedy provides some of her own vocal talents.

There is also a political specter that needs to be understood, which is the role Lord Protector Oliver Cromwell has in Irish history that leads him to be an antagonist in Wolfwalkers.

Cromwell (yes, related to Henry VIII’s Thomas Cromwell) led the Parliament of England’s armies against King Charles and took over England in the only time since its inception it did not have a monarchy.

Cromwell’s place in Irish history is as a malevolent, near-genocidal figure. While the full extent of his brutality is “debated,” when something like that is up for debate, it doesn’t reflect well on the figure in question—especially since Cromwell carried out a series of massacres to help subdue the Irish population, and his actions helped create famine in the country. So, when he shows up in Wolfwalkers and you see the Irish characters jeering at him and being reluctant to embrace the English, it is because 1650 is one year into Cromwell’s attempt to control Ireland.

Wolves in Ireland are now extinct, but they once were an important part of Irish folklore and culture. There have always been rules to keep wolves in check, but serious anti-wolf legislation did happen during Cromwell’s reign. The last wolf was killed near Mount Leinster in 1786. Just last year, the Minister for Culture, Heritage, and the Gaeltacht called for wolves to be reintroduced in Ireland.

Apple TV+ many not have been on your radar very much, but along with Ted Lasso and Dickinson, I have found Wolfwalkers to be reason enough to have it. It is a truly beautiful exploration of the wild, family, and friendship that I look forward to watching, again and again, to pick out more of the details that were infused in this modern masterpiece.