What We Left Behind Review: Star Trek: Deep Space Nine Documentary Boldly Goes Into the Show’s Highs and Lows 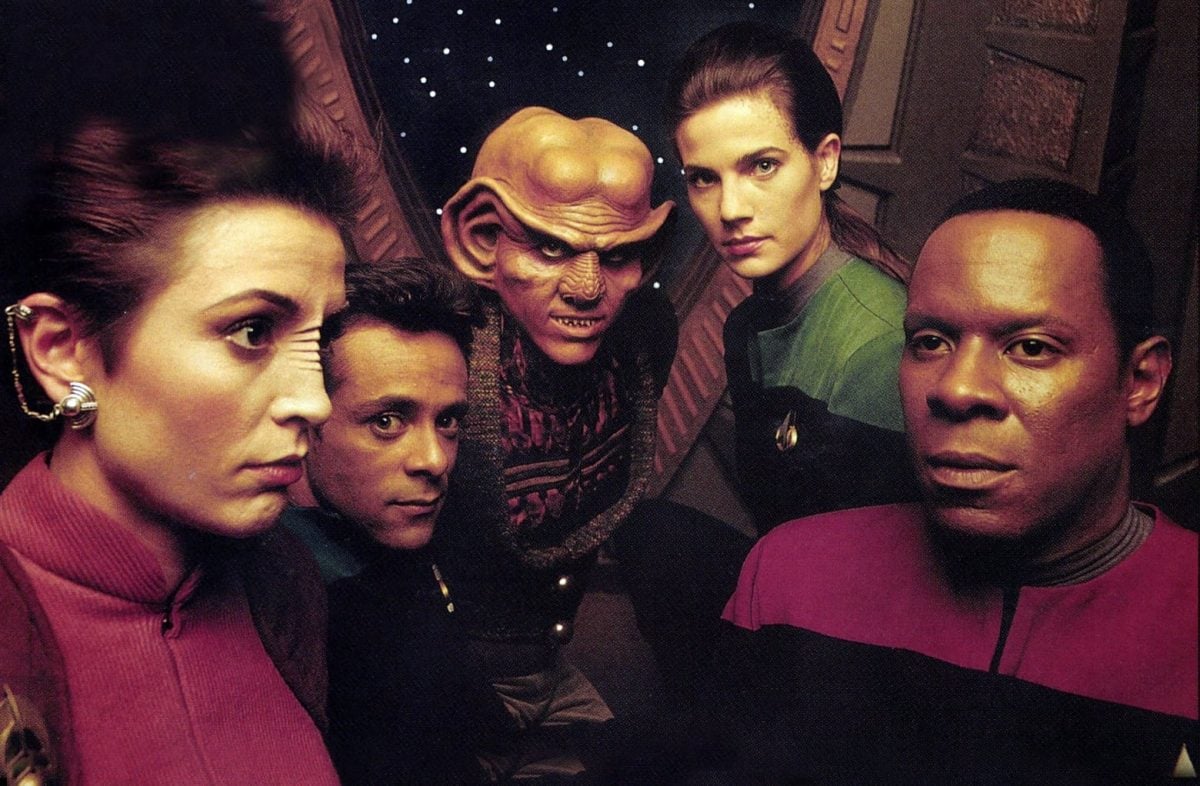 As a dedicated DS9 fan, I knew heading into What We Left Behind: Looking Back at Star Trek: Deep Space Nine that I was going to find elements of the documentary to enjoy. What I didn’t expect was for the film to be so wonderfully honest about the show’s triumphs and failures, and to be, overall, a goddamned delight.

Our theater in Brooklyn was sold out for the one-night-only showing of What We Left Behind. It started on a telling note. Everyone was excited to be there, an electric energy to have in the air. But when the movie began, the sound wasn’t working. We watched helplessly as the actors we’d come to see spoke onscreen without words. Max Grodénchik (Rom), suited up, sang to us silently.

Then I and another fan sprang into action: we ran down the hallway and upstairs to alert the theater about the problem. When we returned to the theater, I announced that they’d promised to restart the film with the sound issue fixed. There were cheers. “You can always count on a Trekkie,” someone said, warming my cold dead nerd heart. Despite the annoyance of the false start, this primed the environment and our excitement to see What We Left Behind all the more.

At its heart, What We Left Behind is grounded in the idea that you can always count on Trekkies. The crowd-funded documentary only exists because the longstanding dedication of fans helped bring it to life. Appropriately, there are anecdotes from fans of every age and demographic peppered throughout. The representation is fantastic, and it mirrors the deeper dive What We Left Behind will take in examining its own successes in representation, and where it came up short.

This is hardly all serious, however: the movie is laugh-out-loud funny at many junctures, especially in-jokes for longterm fans. But even casual viewers, or someone you’re hoping to lure into DS9-watching, should enjoy What We Left Behind. It zips along at an upbeat pace, weaving in and out of a multitude of “storylines.”

There’s showrunner (and documentary co-director) Ira Steven Behr talking shop with Hollywood-types who were clearly baffled by what DS9 wanted to do at the time. There are stories from the creatives who designed the Promenade and made the distinctive visuals happen. There’s a gathering of former writers, united for 48 hours to generate how a potential “8th season” might look; we see that first episode play out throughout the movie in animated storyboard form.

And there are, of course, chats with the show’s main and extended cast. For me, this was the real highlight—it’s fun to even just gaze upon the Ferengis and the Cardassians without their makeup. DS9 was a unique Star Trek in that its satellite characters were so good and so compelling that many moved up the ranks and became series regulars. Appropriately, What We Left Behind gives plenty of spotlight to some of the staples, like Marc Alaimo (Gul Dukat), Casey Biggs (Damar), Aron Eisenberg (Nog), and Jeffrey Combs (Weyoun). It’s impossible to imagine DS9 without them now. There are a lot more familiar faces, but I’ll leave that for you to discover.

We also visit character arcs along with actors, and my favorite moment came with my favorite character, Garak. Actor Andy Robinson immediately commented out of the gate that Garak wanted to sleep with Julian Bashir, and Garak’s sexuality as a gay man was affirmed by both Robinson and Behr. (“Completely gay,” to quote Behr.) Needless to say, I wasn’t expecting this to be trumpeted in terms of Garak, and I couldn’t be happier. The movie also touches on the fact that Garak is now many, many people’s favorite character these days. We just can’t get enough of our tailor-spy morally shades-of-grey Cardassian.

Behr laments that the show did not go further with declaring and exploring Garak’s sexuality. In one of the most refreshing sequences I’ve witnessed, Behr runs down a list of controversial topics he felt the show addressed well, like war and religion; when “sexual identity” is added to the list, however, Behr says that they don’t deserve a “check” for serving this topic well. He thinks they shouldn’t get a pass for the single episode “Rejoined” that features Jadzia Dax kissing a woman (even if this felt groundbreaking at the time).

One episode over the course of seven seasons is not something to be lauded, in Behr’s estimation. He expresses that the show could have done much better, and mentions how much they could have done with Garak and Bashir over the years. It’s incredible in this environment, and much-appreciated, to see creatives willing to criticize their own choices in the past and conclude they shouldn’t receive accolades for doing the bare minimum for LGBTQ+ representation.

On a more positive note, What We Left Behind demonstrates the hugely progressive leaps that DS9 did make, in its unflinching exploration of racism with showstopping episodes like “Far Beyond the Stars,” its promotion of a diverse cast and a powerful black lead in Avery Brooks’ Sisko, its badass, strong women, from Kira to Keiko (a montage of them plays to the sounds of Meredith Brooks’ ’90s girl power anthem “Bitch”).

There’s a lot of emphasis on the role of Major Kira, uncompromising and often “unlikable,” but equally unstoppable. The vivacious Nana Visitor seems to be powering the whole documentary with her chemistry with everyone. Though Avery Brooks does not appear to be interviewed for the doc, archival footage of him is used, and to hear Cirroc Lofton (Jake) talk about the father-son bond forged between them is to cry in a Brooklyn movie theater.

Also discussed is how the show’s intriguing use of terrorists and terrorism would have to be played very differently in a post-9/11 world. There’s even a sequence that shows how violent and divided and hateful our own world still remains, which fades from Donald Trump saying “Some very fine people on both sides” to a quote from Gene Roddenberry: “If man is to survive, he will have learned to take a delight in the essential differences between men and between cultures.” If you’re the sort to lament that Star Trek is newly in the grip of social justice warriors, I have news for you, buddy.

What We Left Behind isn’t afraid to visit painful inside baseball moments like Terry Farrell’s departure, or the cast’s initial wariness to the idea of Michael Dorn’s Worf joining, afraid they would be overshadowed by Trek past. And throughout, the actors read nasty commentary from haters who were baffled by DS9’s stationary nature (sorry), who didn’t understand why the show would go so dark, who found things to complain about at every turn.

Yet the documentary’s existence proves that Deep Space Nine and its fans have had the last laugh. The show not only stands the test of time, but has proven to be prophetic again and again. Its serialized storytelling motif, scorned in its era, is perfect for the Netflix generation, and it blazed a trail through television, transforming the landscape. Its characters are so adored by the audience that it’s hard not to laugh and smile and cringe in sympathy with their actors onscreen. They seem like old friends as they speak frankly about their experiences and share delicious gossipy tidbits. To me, watching, it felt as though no time had passed at all since I first fell in love with DS9 as a teenager; I was as in love as ever.

Ultimately this is a valentine to the show, its creative forces, and its fans. You won’t want What We Left Behind to end, and you’ll linger, as my theater did, through the credits, as tuxedo-wearing cast members sing us off. Only for Deep Space Nine would this be the most fitting of conclusions.

The @DS9Doc ‘What We Left Behind’ was so great—the perfect mix of show history, fan service, nostalgia, behind-the-scenes perspective, gossip, humor, and the quirky, edgy honesty that made #DS9 the best Star Trek on television.

What We Left Behind will be available for streaming and on DVD and Blu-Ray in August 2019. You can sign up to be notified when the doc is out on its official page. See you at Quark’s.