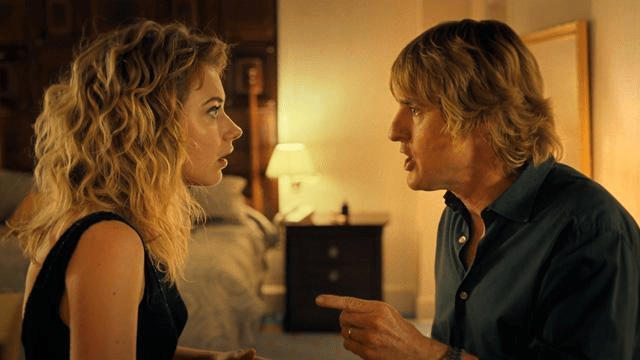 Have you ever been watching a movie and gotten such a bad case of the sleepy-head nods that you knew you were missing something, but you weren’t sure what or when you’d given into sleep? Had I missed a minute or just a few seconds? Or, as happened when I saw Titantic for the first time, a big chunk of the middle, before they hit the iceberg, so I didn’t know they said Jack and Rose that much?

That’s how I felt watching the new “comedy” (we’ll get back to that definition in a minute) She’s Funny That Way. I kept feeling like, “Did I just miss something?” I even had to go so far as to rewind scenes to confirm, “That is the way director Peter Bogdanovich decided to end that scene.” The movie is a baffling piece of filmmaking, because it might be one of the worst-edited jumbles of unfinished storylines I’ve seen from a legitimate filmmaker. Scenes are placed here and there, when logically they seem to fit earlier or later in the story. Scenes end abruptly, but loose ends are never resolved. Even main characters are left without conclusions, which suggests the basic sentiment by the filmmakers is, “Hey, it’s a comedy. Who cares?”

That’s odd, because Bogdanovich, despite all his struggles to step back behind the camera, was never a filmmaker who lacked technical understanding or narrative understanding. Even his one film in the 2000s (Cat’s Meow) and three films in the ’90s (terrible Texasville, often entertaining Noises Off, and forgettable The Thing Called Love) are still clearly made by a director with an eye and head for filmmaking. She’s Funny That Way, even though produced by Wes Anderson and Noah Baumbach, is just a mess from start to finish and suggests there were major pre-production problems that were never solved before shooting—and problems that big can’t, as they say, be saved in editing.

She’s Funny That Way, which was originally titled the much more memorable “Squirrels to the Nuts,” is the story of Izzy (Imogen Poots), a hooker (the heart-of-gold kind) who goes for an evening with a customer who calls himself Darren but is really a director named Arnold (Owen Wilson), who’s married to an actress named Delta (Kathryn Hahn). Arnold gives Izzy $30,000 to stop being a hooker (only after they have sex), because … well, we never know why he did this or has done it with a multitude of hookers.

Delta is starring in Arnold’s new play with a previous one night stand, an actor/British heartthrob with screaming fans, played by Rhys Ifans (young screaming fans, too). The play was written by Josh (Will Forte) who is “dating” a psychologist named Jane (Jennifer Aniston) who seems to hate everyone, especially her patients. Those patients include Izzy and Izzy’s stalker, a Judge (Austin Pendleton) who is having Izzy followed by Josh’s private eye father (George Morfogen). Izzy wants to be an actress, so she auditions for Arnold’s new play for the part of a hooker who has an affair with her best friend’s husband, and after her audition, she starts dating Josh.

OK. I think I got all the set up you need. And on paper, the movie definitely feels something like a farce or screwball comedy from yesteryear, which Bogdanovich understands and can do well. After all, his What’s Up, Doc? and Paper Moon are two of the best revivals of the genre during the American Independent Revolution, and Noises Off, although nothing great, gets solid laughs as a theater farce. In fact, this new film’s only laughs come from that same place: when the film lampoons the world of theater. But for the most part, this movie just isn’t funny, and it lacks something farce desperately needs to succeed: speed.

Farce (and screwball) comedies are the like the French pastry of comedy. They’re deceptively hard to do well, which is why so few people will even make the attempt. Too heavy a hand, and the work will simply collapse into wet pile of unappetizing goo; succeed, and you have light and airy delight. We don’t see much of it done now. Last year, Johnny Depp gave it the old college try with Mortdeci, and the results were hard to watch.

One director I know has an understanding of this specific genre is Stanley Tucci, who has directed farce on stage (Lend Me a Tenor) and in film (the underrated The Imposters). The most basic rule is, if the audience isn’t laughing most of the time, there is something wrong, and I didn’t laugh at much during She’s Funny That Way.

That’s odd, because there are funny people all over this movie really trying to make the thing work. The often hilarious Kathryn Hahn, Rhys Ifans, and Austin Pendleton are doing a lot of heavy lifting trying to get as many laughs from their lacking dialogue as possible, often adding a bit of manic energy, even when it doesn’t fit. Lucy Punch’s one scene gets a few laughs because of her performance (she has an effortless bit of dizziness that fits this genre), and made me wish she had replaced Imogen Poots, who seems completely wrong for the role. Jennifer Aniston is supposed to be funny, but everything just seems mean, shrill, and desperate.

The two oddest performances I would say are Forte and Wilson, who almost seem lost in this movie. Forte is actually a hilarious comic who is also a fine actor (Nebraska), and yet, of all the actors in this movie, he’s been given the least comedic role. He adds some charm to the role of Josh (he could clearly be a Paul Rudd type if he ever wanted to go in that direction) and in their few scenes together, has genuine chemistry with Poots. But I wonder, why cast Will Forte in such a minor role (and his role seems to have been significantly cut), and never ask him to be funny? Especially opposite Wilson, who is no longer even a funny actor and seems to be tired of trying. His performance is so hang-dog, he brings down any energy the other actors are trying to infuse to make the not so funny dialogue seem funnier and lighter than it is.

Oddly, Wilson seems to be the only actor Bogdanovich was Hell bent on having on the screen, considering the original cast announced had Olivia Wilde in Aniston’s role, Brie Larson as Izzy, and Jason Schwartzman as Josh, but after production delays, only Wilson remained attached to the project. Why Bogdanovich committed to Wilson is beyond me, because he really gave a lazy, uninspired performance. Maybe Wilson realized the flaws in the script (by Bogdanovich and his ex-wife, Louise Stratten)—which is bad—or realized this wouldn’t look like classic Bogdanovich. Classic farce and screwball films, which this is clearly trying both to be and to pay homage to the best in that genre, are usually fast-paced and bright—sometimes almost cotton candy-colored. This movie isn’t just slow-paced but oddly dark in its visuals. For reasons I don’t understand, it doesn’t use its own out-of-time style to its advantage, and the music feels like an afterthought, rather than scored to drive the action.

But the editing really seems to be this film’s major downfall. Perhaps because the film was paced so poorly to keep the run time relatively short—just over an hour and a half—Bogdanovich and his editing team of Pax Wassermann (his son-in-law) and Nick Moore did a hatchet job on the film, because it feels like there were a lot of storylines introduced at random places and then left on the cutting room floor. There’s literally an end credit with the completely absent Tovah Feldshuh and Joanna Lumley introduced, as if to say “yes, they filmed stuff, but we cut their parts out of the movie.” Cybil Shepard and Richard Lewis have three brief scenes for no reason that should have simply been cut if Bogdanovich really was concerned about time.

For example, I didn’t know until it was explicitly said by Aniston that she was dating Will Forte, and we never know why they haven’t simply broken up, considering the way she speaks to him (she has nothing nice to say to or about him the entire movie). We get no resolution regarding Forte’s relationship status with Poots, except what we’re told in voice-over, nor do we see how the married couple managed to work together after Wilson revealed himself to his wife. It’s as if, because it’s supposed to be funny, Bogdanovich feels nothing should matter to the audience. But if that were true, it would have to be really funny, and trying to save your movie with text and narration never works.

With a movie this flimsy, it may not be worth digging into its bigger thematic problem, but the scenario might be part of the reason the film feels so sluggish from the beginning. Arnold apparently gives all the hookers he’s had relations with $30,000, and if that’s your character, you can’t constantly tell us “he’s a nice guy.” He’s still cheating on his wife with hookers and using a chunk of money (likely family money) to try to rid himself of whatever guilt he has because of these indiscretions. It’s unnecessary and an uncomfortable thing to have in a movie like this, especially with the whole casting couch issue this movie dances around. And while I don’t look at Bogdanovich with discomfort, having your main character also be a director makes this story feel more revealing than I think Bogdanovich intends. The gender dynamics at play are at best out-of-date, and at worst, more disturbing than a move this un-funny can withstand.