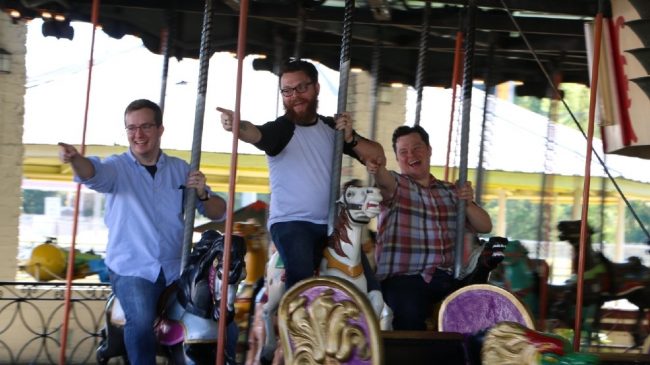 If you don’t know the McElroy brothers, you’re missing out on some good, good podcasts. Justin, Travis, and Griffin run an advice show “for the modren era” called My Brother, My Brother, and Me.  Though they aren’t experts, the brothers field their listeners (and Yahoo answers) questions with a perfect mix of sincere sincerity and hilarious goofs. This show isn’t for kids, but it’s definitely for the coolest babies.

The McElroys host MBMBAM (ma-bim-bam), as well as a slew of other podcasts, produced on the Maximum Fun network, including the D&D show The Adventure Zone. Each brother also has a spin off show with their significant other: the manners show Shmanners, the medical show Sawbones, and The Bachelor fancast Rose Buddies. Also related: Justin’s partner Sydnee hosts a wonderful podcast with her sisters called Still Buffering.

Clearly, podcasting is the family pastime/business, and thank goodness, because there are so many awesome-ear-listening episodes for you to enjoy. Even better, your eyeballs can now get in on the action: Seeso just released season 1 of the My Brother, My Brother, And Me TV show.

Part of the enjoyment of listening to the McElroy podcasts is that the brothers, and their partners, sound like wonderful, hilarious people, and they make their audience feel included in their fun. You get to listen to them riff, as really only close friends and family can, spinning off of each other’s jokes into the most insider-y jokes of all time. It’s a wonderfully inclusive brand of media.

For fans new to the McElroy franchise, they’ll get a taste of the long-time podcast. For loyal listeners, the TV show feels familiar, but not too familiar. The set-up mirrors their podcast: it’s still an advice show, and each of the six episodes begins with a question taken from the masses, which the brothers discuss at length. However, in the podcast, the brothers remain at that advice table. On the television show, they take each question and immediately make a not-always-sensical plan of action that snowballs, like their jokes, into stranger and stranger situations. They take their mission/question out into their hometown of Huntington, West Virginia, and interact with the public. Somehow, this always involves a sit-down with Huntington mayor Steve Williams, who largely denies all of their requests for employment, approval, parades, etc.

While the first episode, on a haunted dorm room situation, feels a little slower than the rest, ultimately, all six episodes will have you giggling uncontrollably. The McElroys tackle questions on ghosts, padding resumes, de-stigmatizing spiders, getting teens to connect with nature, creating secret societies, and finally, they celebrate their mash-up holiday Candlenights.

For an example of their TV format, in my favorite episode, episode 3 (which you can watch here) listener Dan asks the McElorys the question: “How do I get my wife to let me have a pet tarantula?”

Travis hates spiders, and Justin and Griffin suggest he confronts this fear. Justin plays a prank on Travis, pretending his hand is a spider, and Travis hits him, which becomes a moment of conflict, that the brothers talk about: “The energy in there f*cking sucked.” “It was not brother weird, but it was professionals-working-together weird FOR SURE.” They then go on to try many tarantula-related solutions to Dan’s question. They meet and hold a bunch of real tarantulas, they launch a tarantula Facebook page, and they narrate a live action tarantula TV show.

In the end, they realize the ultimate way to de-stigmatize tarantulas would be to throw a parade in Huntington to raise awareness about Dan and tarantulas. It’s as vague and bizarre as it sounds, and it is downright ridiculous and wonderful. Mayor Williams tries to forbid this parade, but naturally, they throw it anyway, recruiting a band to play “The Itsy Bitsy Spider,” along with a small group of enthusiastic marchers to chant: “Let Dan get a tarantula!” 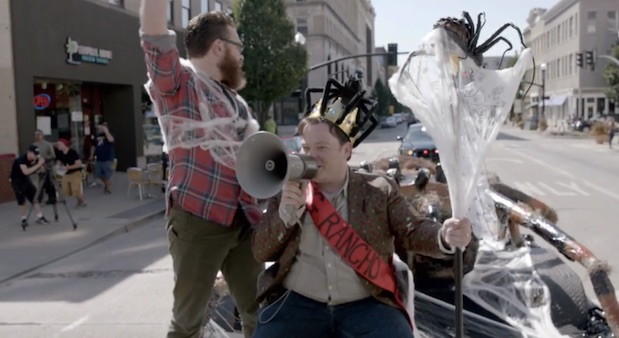 The episode ends with a conversation with Dan and his wife, who still don’t get a tarantula. The brothers conclude later that she has every right to refuse, and Dan was being kind of pushy. Then they talk through Travis hitting Justin again, with their dad, and settle on the message: 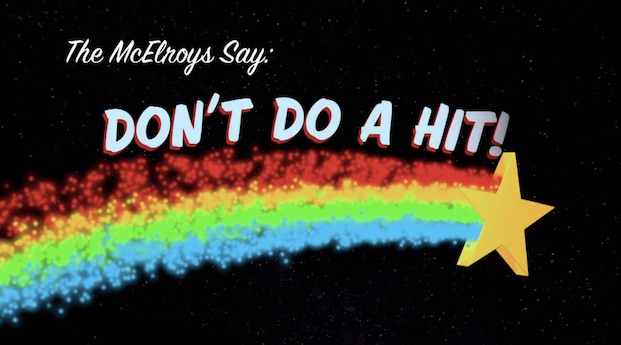 Other episodes includes cameos from their families, local business owners, the property brothers, the vlogbrothers, and finally, dedicated McElroy fan and creator of Hamilton Lin-Manuel Miranda, who narrates the last episode.

This is the kind of show I need in my life right now. There’s something so good and pure about watching three brothers be super, duper goofy and enjoy their time together. It’s a great spin off for their franchise, and it made me love the podcast even more. Thanks to the eldest, middle, and baby McElroy brothers for caring about creating such hilarious content, with so much heart.

Molly Booth is a freelance writer and YA author of Saving Hamlet, out now, and Nothing Happened, spring 2018, both from Disney Hyperion. She’s also an English MA candidate at UMass Boston. She was homeschooled through high school, which means she gained her Geek/Nerd/Dork Certificate at an early age. She lives in Boston and has almost too many pets. Almost. Follow Molly on twitter and tumblr, or visit her website for more nerding.