Review: Princess Princess Ever After Is a Sweet LGBTQIA Fairy Tale 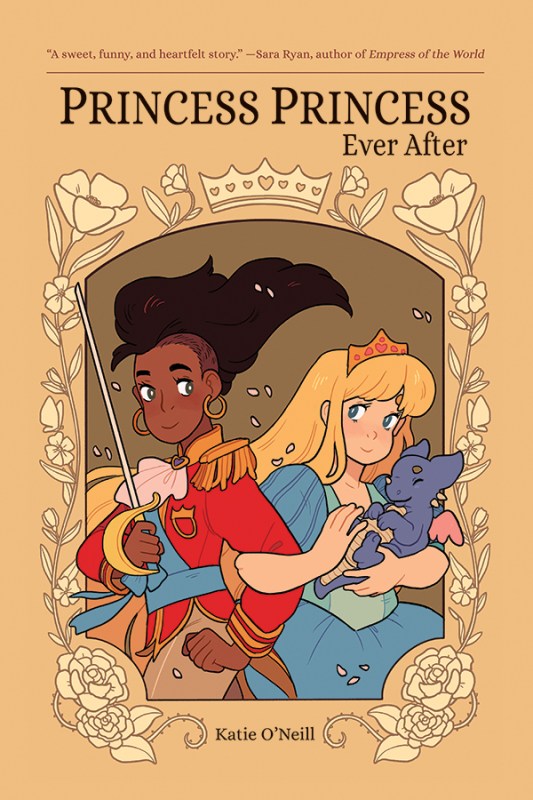 Steven Universe‘s Rebecca Sugar has done several interviews about the importance of sweet, innocent, romantic fairy tales for children featuring LGBTQIA characters, pointing out that while we have no problem foisting ideas of heterosexual marriage and love on children, homosexual relationships are treated as inappropriate or not G-rated content, which sends the message that feeling that way = no happily ever after for you! Thankfully, there are several stories in pop culture that are filling that gap. One of them was released by Oni Press yesterday!

Princess Princess Ever After is a hardcover graphic novel collection of a web comic of the same name written and drawn by Katie O’Neill. It tells the story of two princess, both of whom would rather be anything else. Sadie is a blonde princess who at the top of the story is trapped in a tower with no one but a chubby dragon for a companion. Amira is a black princess who has run away from her princessy life to become a hero. She happens upon Sadie’s tower and decides to rescue her: 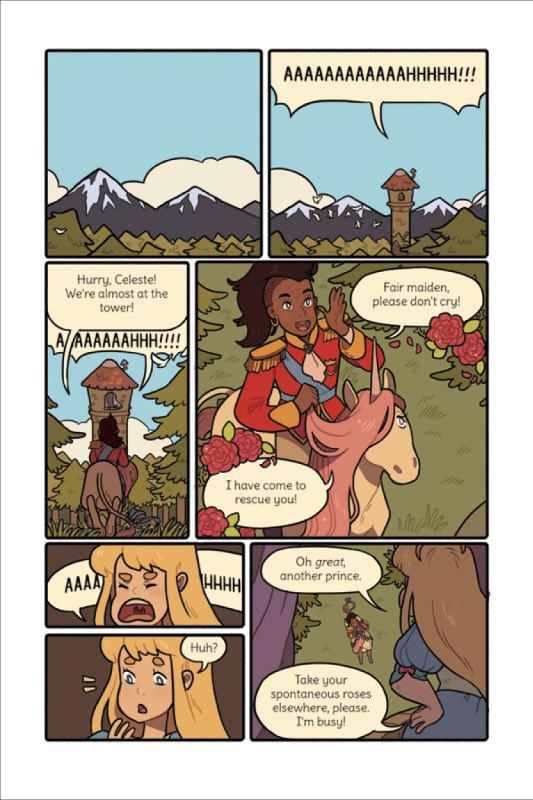 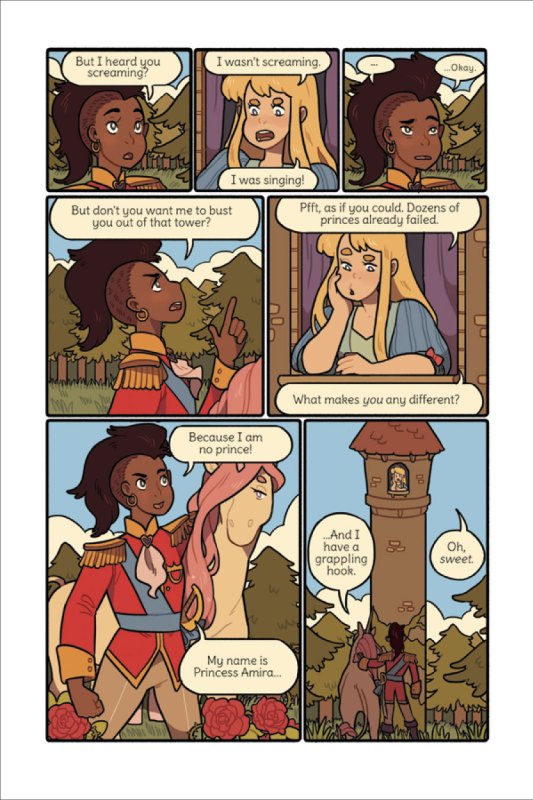 Amira’s subsequent rescue of Sadie, which doesn’t go all that smoothly at first, sets off an adventure in which they face their fears, rescue a prince, and develop strong feelings for each other.

O’Neill tells this story with both sweetness and snark as her protagonists, while innocent, have a wicked sense of humor. Meanwhile her adorable art style and use of color would be at home in any prose children’s book, making this a story that is accessible to all ages. Sadie and Amira are the definition of nuanced female characters, and we get to know each of them well, learning how they’ve gotten to this point, and watching as they evolve and grow enough to be able to look their fears and insecurities in the face. It’s lively, funny, and reflects the world in which we live in several ways.

In addition to the female protagonists being attracted to each other, it’s pretty awesome that one of them is a young woman of color with, as she herself puts it, “kick-butt hair.” Equally important to having nuanced female protagonists is having nuanced female antagonists, and in Princess Princess Ever After, we have a great one in Sadie’s sister, in a storyline that basically tells Frozen to go eff itself with its sisterly love. There are male characters in the story, the main one being the prince they save, and while he’s initially skeptical of the women’s abilities as heroes, he comes around and recognizes how great they are in a way that is realistic and a great example for any boys who’ll read this book.

Princess Princess Ever After is a wonderful story that’s great for any comics readers among you, as well as a great gift for any young comics readers in your life of any gender.  If you’re looking for a quality story featuring LGBTQIA characters, consider picking this one up!

And keep your eyes peeled here at TMS later today. I’ll be posting an interview with O’Neill as well as a special announcement from Oni Press!