Love Eternal for the Only Lovers Left Alive 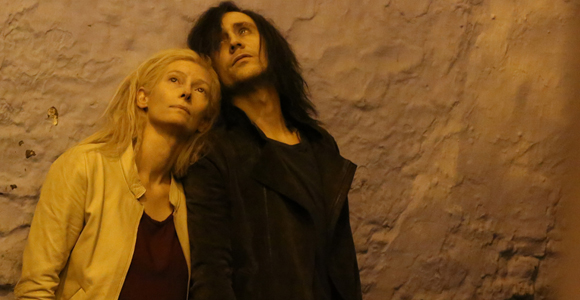 As regular readers are no doubt aware, I tend not to fangirl about things. Sure, I get excited about the odd property and its conversion into piles of cold hard Hollywood cash, but I’m generally not one for jumping up and down and squealing in delight. Nothing against it; it’s just not my style. But imagine my surprise and elation when I first heard about Only Lovers Left Alive, a new Jim Jarmusch art-house ditty about nothing other than a sophisticated set of vampires, starring a host of my favorite contemporary actors, top billed by Tilda Swinton and Tom Hiddleston. Words could not express my anticipation. For months I nibbled on teaser posters and the occasional leaked GIF, judiciously avoiding the trailer until I just couldn’t take it anymore and caved.

I was not disappointed.

Only Lovers Left Alive is a sensual, delicious morsel of a film, at once moody and atmospheric, touched with wry, unexpected humor. Swinton and Hiddleston play a married pair of bloodsuckers, centuries old, and idly whiling away their time between their fixes of the “really good stuff,” preferably O Negative. Installed in Tangiers and Detroit, respectively, Eve (Swinton) comes running to the aptly named Adam (Hiddleston) when it seems her lover is entrenched in one of his dour, existential moods. After a series of night-flights, the two are reunited, and create their own nostalgia-tinged Garden of Eden amongst underground rockstar Adam’s vintage instrument collection. But their romantic idyll of blood-sipping debauchery is interrupted by the sudden arrival of Eve’s “sister,” Ava (Mia Wasikowska), a childish young vampire whose whims and vast hunger spells trouble for our couple.

Pale and slender, with drooping rockstar hair, Swinton and Hiddleston make a fine androgynous pair, well balanced by the costume and styling departments between light and dark. The difference between the two is far from cosmetic however, as Eve is a kind but tough woman with undying enthusiasm for what the world holds, while Adam is a far more sullen, temperamental creature, reclusive and prone to suicidal thoughts. The two are undoubtedly equals, partners in crime and leather pants. Eve, however, especially in the third act, sometimes comes off as Adam’s protector, not so much from the world, as from the darker reaches of himself.

Only Lovers Left Alive might be one of Jarmusch’s most commercially accessible films, though it shares DNA with the more cryptic The Limits of Control, in both cast and its curated, cool air. The tone here is romantic, and somewhat playful, lit with unexpectedly comedic timing at just the right moments. Especially amusing is Adam’s ploy to obtain blood through a hospital doctor played by Jeffrey Wright, where, wielding a vintage stethoscope and a nametag which reads “Dr. Faust” or “Dr. Caligari,” the too-cool, sunglasses-wearing vamp runs up against Wright’s Dr. Watson’s perfectly rational sense. The film is peppered with little humorous asides, mostly those referencing bygone times, such as in Eve’s friendship in Tangiers (the location itself very much on trend these days) with the actual Christopher Marlowe (the always excellent John Hurt), now an aged vampire with a grudge against Shakespeare, an “illiterate zombie” who took credit for Hamlet. “Well,” Marlowe allows, “I was already dead.”

The “zombies,” the endless masses of ungrateful humans who have wrecked their own planet, are a source of much derision for the vampires, who bitch and curse our lack of imagination. It’s the ultimate analogy for the hip and the square, those above and outside of time, cultured and elite, versus the sad mortals and their petty ways. But Jarmusch’s vampires are nowhere near perfect, saving the screenplay from any moralized grandstanding. They’re contemplative and nostalgic, sensitive and jealous, depressed and hopeful. They are, in some ways, the most human portrayal of vampires the screen has seen in a very long time.

It’s not all sweetness and light in the night world of Adam and Eve. A dark sense of the apocalyptic hangs over the film, which takes place entirely at night, as the pair cruise around the abandoned ruins of industrial Detroit. There is a general air of foreboding undercutting the romantic sentiment, a sense that something terrible is about to, and will happen. Even after the tornado of Ava’s entry and departure into the still waters of the film, darkness remains, creeping at the edges and reminding us all is not well. The lovers, it must be said, are addicts, and like true addicts they will, in the end, do nearly anything for their life-saving sanguine hit. Jarmusch moves their need to the foreground as the story goes on, and never lets us forget what, exactly, we are dealing with.

Like much of Jarmusch’s oeuvre, Only Lovers Left Alive is not for everyone. I can understand its ambling plotlessness, though not without internal rhythm, will frustrate those seeking a film with more formal structural elements. But I found its calm saunter through the slice of Adam and Eve’s life suited the script’s languorous ambience, lending it the slow, dreamlike quality necessary for rendering such a tale. The romance of the film is not mired in cynicism, despite its hip attitudes. It is instead one of the more believable, and yet rose-colored portraits of a couple both inside and outside its genre. As Marlowe tells a distraught Eve on the cusp of her departure from Tangiers, the two can’t live without each other. Later, as the pair lay post-coital in a tangle of alabaster limbs on dark sheets, they seem like nothing so much as twin halves, perfect compliments which need each other to survive as a whole. It made me believe that, in a world of man-made destruction and the death of poetry, the undead might indeed be the last lovers left alive.