Two out of five zombies. 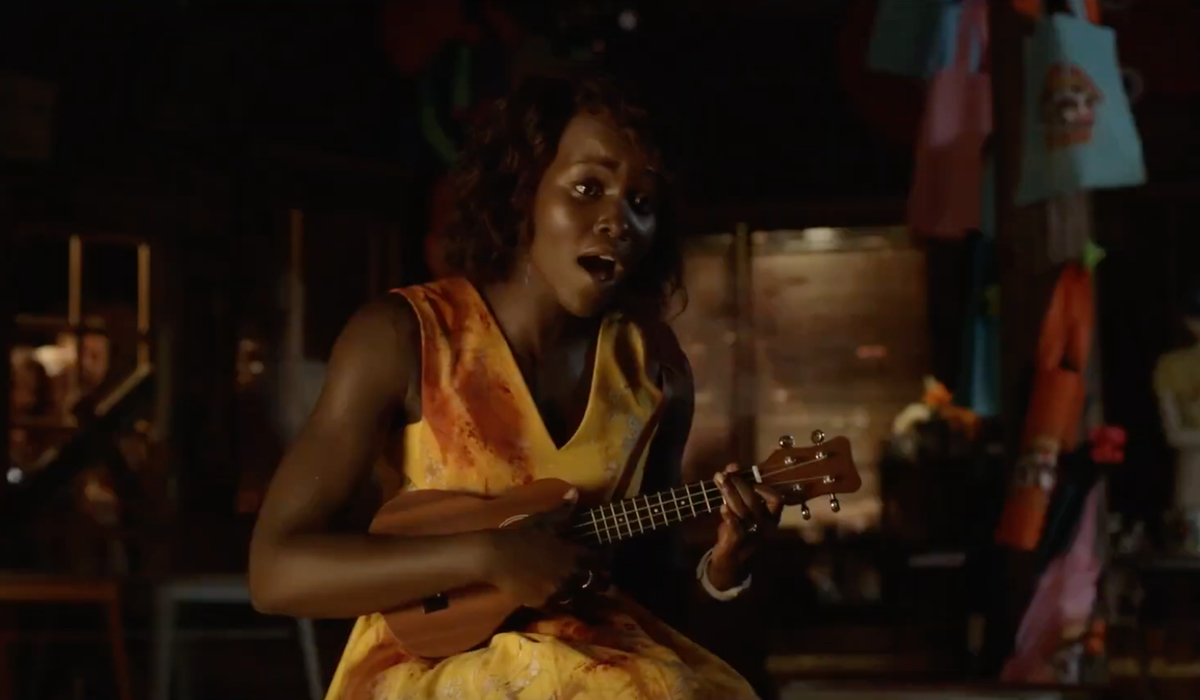 When zombies attack a petting zoo, it’s up to an intrepid kindergarten teacher (Lupita Nyong’o) to save her class from being lunch in zombie comedy Little Monsters. It’s a vehicle for Nyong’o’s comedic skills and action skills. If only they let Nyong’o’s character be the star, rather than the side character to a weird arc for a slacker dude with no redeeming qualities. These characters are more cliched than anything else in the cinematic genre.

The opening of the film, which doesn’t focus on Nyong’o’s Miss Caroline but instead on fellow lead Alexander England’s David, is a little too Shaun of the Dead in how it centers on a slacker man and his troubles with women. Except while Shaun was charming, David is decidedly not. England does what he can with the material, but David is a manchild who needs a redemption arc and unfortunately he dominates the first excruciating fifteen minutes of the film.

And while David’s arc feels more about overcoming his own fears of being a father, it still doesn’t work. David isn’t a character we feel particularly inclined to root for, because his character isn’t that dynamic. However, England has fun when David gets to be likable, and he and Nyong’o would’ve made a far better duo in a far better film.

Josh Gad fares slightly better as the villainous Teddy McGiggle. A children’s TV host with a selfish, sinister side, this is a role actually well suited to Gad’s comedic sensibilities. He’s a lot more enjoyable as a villain than he is as a bumbling comedian like he does in most of his roles. His comedic timing is excellent, and while his character is a bit of a cliche, Gad is clearly having a blast, which makes him watchable.

But the star is Nyong’o. She’s a delight as Miss Caroline, sweet kindergarten teacher, and a delight as Miss Caroline, zombie killer extraordinaire. She sings, she slays, can she do no wrong? Nyong’o elevates the film beyond the decidedly weak script. It’s also the kind of zany role that she should be getting more offers for. Let her be a zany heroine in all genres, but hopefully with some better material.

The concept of the film is decidedly hilarious. After all, zombies and petting zoos and kids seems like a good recipe for a comedy. And the film has some great moments, mostly centered on Miss Caroline kicking ass and the kids being kids. But there’s too much emphasis on shock value humor, mostly coming from David and Teddy, and there isn’t quite enough poking fun at the genre to make it a savvy send up.

Not all films have to wink at genre conventions to be funny, but if you’re doing a zombie comedy, then you kind of have to poke fun at the conventions of the genre if you’re going for such a wildly funny premise. None of the kids or adults seem to be aware of the conventions of the genre, which is weird since the film includes an early scene of David and his nephew playing a zombie game. You think that one of the kids or even David would know a bit about how to defeat zombies.

Little Monsters is worth considering a watch on Hulu for Nyong’o, but other than that, if you need a zombie comedy, Shaun of the Dead is still superior. Nyong’o is a star who deserves more comedic leading roles, but she deserves better than this one.