Review The Interview | The Mary Sue

Review: Just Because You Can See The Interview Doesn’t Mean You Should 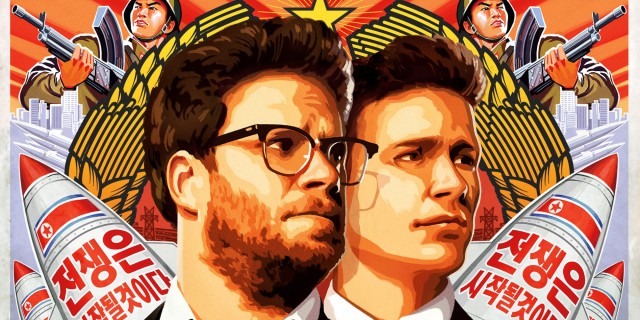 It’s strange to write up a review for The Interview, because even as I write it I have no idea if and how many of you will have the opportunity to see the movie. When I saw a press screening, this was supposed to be one of the big Christmas releases of the year. Then a week later, the film was pulled completely. Now, the movie is being released as a limited film. And while I admire everyone who campaigned for the film to be released on principle, I must admit, even before everything happened, I was pretty underwhelmed by what I was watching, and I can’t imagine how audiences who have gone through ups and downs of this release will feel about the actual film – or if they will even care about the quality of the film. It has, apparently, become a symbol for freedom.

But I was very underwhelmed by this movie from Seth Rogen and Evan Goldberg. First, a word about my biases – I think Seth Rogen is hilarious. The guy can just talk (or laugh that crazy laugh) and I get serious case of the giggles. He was my favorite part of The 40 Year Old Virgin, and I really loved him in 50/50, The Guilt Trip, and Take This Waltz. He’s very, very likable – except in extreme R movies.  His frat boy humor just doesn’t hit my funny bone, and The Interview is in that tradition; an extreme R comedy in which the biggest joke is the film’s premise, without much character or commentary.

The Interview is about a talk show hosted by James Franco’s character Dave Skylark, who wants nothing more than to get big ratings and be famous for tabloid journalism. But his news-focused best friend/producer Aaron Rapaport (Rogen) wants to use the power of the airwaves for good, and insists they find a story worth their time. They find that story when they realize that Kim Jung-Un (played by Randall Park) loves Skylark, and would be happy to give him, and only him, an interview. They agree to the interview, but before they can leave, the CIA asks them to “take him out” by assassinating him with poison. Now, I would normally withhold this last piece of information, but you would have to be living under a rock to not know that Kim Jung-Un is ultimately violently assassinated (when the news is reporting the film features “head chunks,” you probably know the ending). They accomplish their goals after lots of mistakes and bumbles, including Dave finding himself seduced by Jung-Un’s charms.

The reason this “spoiler” isn’t really a spoiler is that the movie relies entirely on a premise which provokes and shocks, rather than building much out of that premise. There is some humor with the characters, primarily Franco’s childlike Dave, and Rogen also has good, funny chemistry with Diana Bang (as a North Korean officer). But the film’s to-go humor is gross-out, it’s inarguably racist and homophobic, and the political humor is very base. There really isn’t much commentary for this outrageous satire about media, CIA involvement, or North Korea. The Interview is rarely funny or pointed, and if you’ve seen shocking comedies in the past decade, there isn’t that much to be shocked by. Which makes me ask, what were Rogen and Goldberg going for?

We can call this movie a symbol of freedom and an example of free speech – but the film is the film, and unless you are the biggest fan of Rogen and Franco’s or you truly want to support this film, I can’t imagine you won’t be underwhelmed and disappointed, especially after the controversy this film has created. It might be everyone’s right to see this movie, but that doesn’t mean you have to see this only occasionally funny, often juvenile buddy comedy which isn’t nearly as provocative as the film’s premise promises.

As of now, the film is being released in limited independent theaters on Christmas.