BOOM! Studios Delivers the Nuanced Female Characters of Our Dreams in Jane and Jonesy 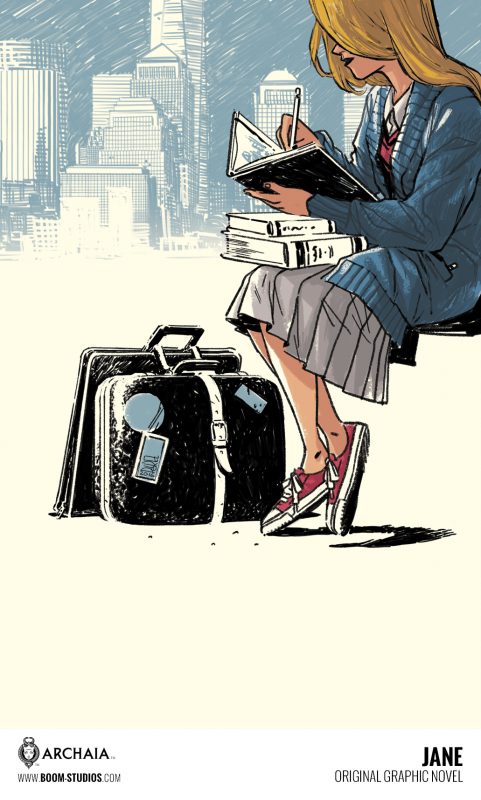 Beautiful life exists outside the binary of DC or Marvel. I’m still getting over this tweet that Kaila included in her post about those heinous “Christian” parents:

gender is like comics, if you only think the Big Two exist you’re unbelievably fucking tedious

So true, Chaos. So true. Because yes, when asked to make a choice, we’re rarely actually, concretely limited to this or that. There’s usually, if we think long enough, the option of this other thing over here. Such is indeed the case with comics.

BOOM! Studios has been killing it lately, not just with quality titles in general, but specifically with their offerings of female-led comics. From Lumberjanes to Slam to Misfit City, this publisher has been going out of its way to not only provide some awesome female protagonists, but to seek out amazing female creators to bring them to life. Tomorrow, you’ll be able to find two more amazing examples of what BOOM! has to offer in the way of nuanced female characters.

She moves into a shoebox-sized apartment with a roommate named Hector, and begins art school. However, in order to maintain her scholarship, she has to be employed, and so she answers an ad for a mysterious job that she knows nothing about until she agrees to take it. Turns out, she’s to be the nanny of an adorable little girl named Adele, which seems fine at first. That is, until she meets Adele’s dad, a taciturn grump named Rochester who seems to tolerate or hate her at intervals.

As she gets to know the family and their creepy home, and tries to decide whether or not this job is worth the anxiety, she experiences a whole new world of fancy parties, mystery, danger…and unexpected romance.

I haven’t read Jane Eyre since college, so I can say that whether you’ve read the original or not, this book totally stands on its own. McKenna manages to make Jane sound like a character out of an old novel without taking anything away from the setting or the story. This Jane is at once classic and contemporary, and the classic touches just accentuate the fact that Jane has always felt out-of-place. The plot itself is also both classic and contemporary, unfolding rather like a Gothic novel…but with very modern things happening.

Helping to balance the homage to the source material with the modernity of the adaptation is an amazing art team led by Pérez, who both pencilled and did some coloring duty, and including colorist Irma Kniivila, and letterer Deron Bennett. Each of their considerable skills is an important contribution to giving this book its feel. Pérez’s style evokes much older illustration, and his and Kniivila’s colors ebb and flow depending on what Jane is going through. The use of color, in particular, is masterful, either coloring or draining the color from Jane’s moods as she experiences them. And Bennett’s letters are perfect, giving us a window into both Jane’s soul as an artist, and evoking the source material by looking very much like handwritten correspondence.

If you’re familiar with the original novel at all, you’ll definitely recognize certain characters and situations (instead of helping an ungrateful Rochester after he has a horse and buggy accident, the Rochester of this version splashes Jane with water after speeding past her in his car, for example), but the story also speaks to a universal loneliness that many people should be able to relate to.

For a debut in the world of comics, McKenna sure has given us a good one! 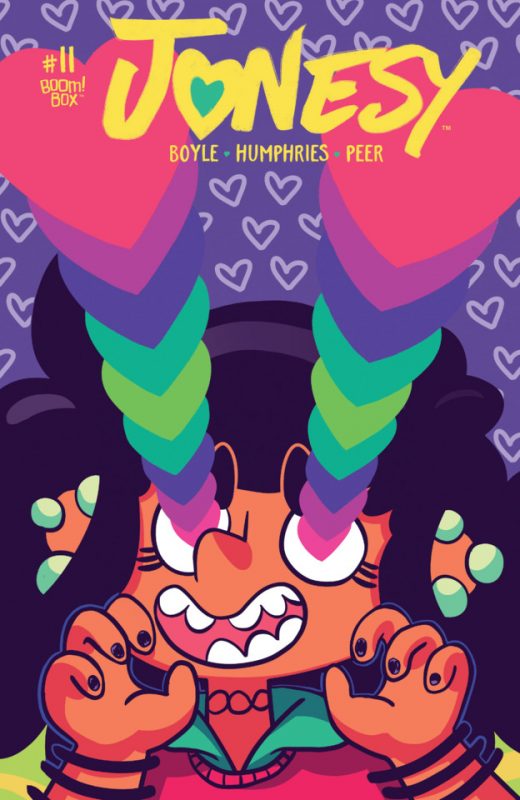 And then there’s Jonesy, a book that we’ve been excited about ’round these parts since it first debuted in December of 2015. Sadly, the series has come to a close with Issue #12 (for now. For now, right? RIGHT?!), but thankfully you can now read the series in its entirety, because Jonesy, Vol. 3 comes out in trade paperback tomorrow!

Jonesy is the story of a high school student of the same name who love zines, donuts, Riot Grrrrl, and her family and friends. Oh, and ferrets. She also has a super-secret power: she can make anyone fall in love with anyone else! The catch? She can’t make anyone fall in love with her. So, while she can play Cupid for other people, she’s stuck trying to find love the old-fashioned way.

This book is an amazing title for so many reasons. First, let’s start with Jonesy herself. She is such a unique and vibrant character who, while she’s experiencing standard teenage things, doesn’t seem to deal with high school life in a standard teenage way. She is entirely her own person and insists on always being herself, even if that means things go wrong or people don’t like her. This doesn’t mean she doesn’t make mistakes. She can be stubborn, she loses her temper, and she sometimes doesn’t do as good a job as she’d like showing her friends that she cares about them. However, she learns from these experiences and always tries to do better.

Humphries and Boyle have created a nuanced Latina heroine with heart, humor, and an awesome, alternative fashion sense, anthey’ve surrounded her with a diverse group of family and friends. Her dad and her abuelita play a huge role in her life, and she’s very close to both of them (her abuela, in particular, is such a character!). Neither of her best friends, Susan and Farid, is white. And sexuality isn’t a given in the story. All the characters allow for the possibility of anyone having a girlfriend or a boyfriend, and it’s amazing to see sexuality treated as a non-issue.

Boyle’s talents and contributions cannot be overstated. Staying very true to the Riot Grrrl/zine aesthetic that Jonesy loves, Boyle has created a colorful, cartoony, cut-and-pasted world for her characters, adding to the book’s sense of fun and remaining resolutely feminine.

I really love this title, and if BOOM! is smart (and they are), they will figure out a way to give Jonesy more story in the future. But for now, we have a new trade paperback to plow through.

Both Jane and Jonesy will be in comics shops TOMORROW, September 13th, and will be wherever books are sold on the 19th. Do yourself a favor and check them out!