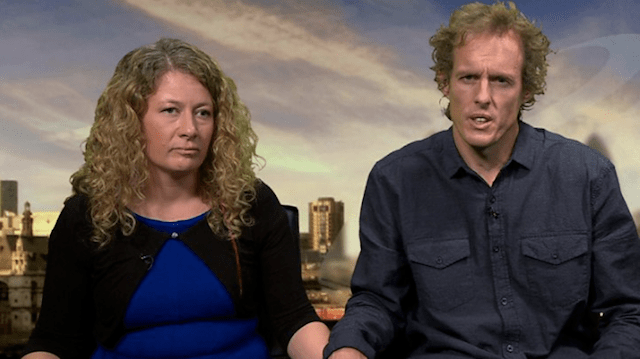 Two years after they yanked their older son out of the school system because (gasp) a student in his class began wearing a dress, Nigel and Sally Rowe are at it again.

The British couple have now pulled their younger son from classes over their shock and horror that the church-run school system is (clutch pearls!) sensitive to gender fluidity. They apparently like to make headlines for their transphobic, concern-trolling stance. I’m furious at this petulant and destructive behavior so let’s deconstruct the BBC article:

“Nigel and Sally Rowe said their son became confused as to why the child dressed as both a boy and a girl.”

Well, Nige—Sal—you see, as his parents, it’s your job to help ease that confusion, not sue your school district. Kids aren’t born with inherent biases—they learn them—and it’s pretty simple to tell your kid, “Gender can be fluid. Some children prefer to dress as both a boy and a girl.” Bam, that would’ve done it and he could’ve gone back to maths class. The only reason your child is “confused” is because you made him confused with your old-fashioned adherence to societally constructed ideas of gender and uncalled-for transphobia.

“The Diocese of Portsmouth, which runs the Church of England school on the Isle of Wight, said it was required to ‘respect diversity of all kinds’.”

The Rowes claim to be “Christian,” but they literally have their Diocese telling them that it’s important to respect diversity. They apparently have disregarded this.

“The couple said under the school’s bullying policy their son faced being disciplined for ‘mis-gendering’ the six-year-old pupil.”

Good. Bullying of any sort has no place in school—especially at age 6. Teach your child not to misgender, and not to be a bully. Both of these lessons will take them far in life. But I understand the difficulty of this injunction when both parents are such obvious bullies.

“Two years ago they removed their eldest son from the same school in a separate row about a different child with gender identity issues.”

You’d think by now that the Rowes would have found another hill to die on. Or at least not been surprised when the concept of a child’s gender fluidity arose again.

“The Rowes say the suggestion that gender is fluid conflicts with their Christian beliefs and they are seeking a legal challenge against the school’s actions.”

This is possibly the least “Christian” action imaginable, but these people aren’t actual Christians. I’d love to see the Bible passage where Jesus, a wearer of long, loose robes, derides the use of dresses.

“Mr Rowe said: ‘I am shocked by the suggestion, especially from a church school, that just because we question the notion that a six-year-old boy can really become a girl, we are transphobic.'”

Nige, Nige, Nige, that’s literally the definition of transphobia. Have fun in court.

“Mrs Rowe said: ‘We believe he [the older boy] was under stress by the confusion that was caused by having a boy in his class that decided that they were going to have a girl’s name and dress as a girl.'”

The only stress came from you, lady. The stress developed, I imagine, when your young child reported that his classmate was doing something he didn’t quite understand and you reacted by recoiling with horror. You told him it was wrong and confusing. You instigated the stress. You are a bad person. You are the villain in this story.

LGBT campaigner Jane Fae, who is transgender, said Mr and Mrs Rowe had misjudged the issue, as children with gender issues needed sympathy to help prevent them being bullied.

And this is why it’s quadruply important for there to be respectful policies that support students’ gender fluidity within the state, the school system and in this case, the church that runs the school. Of course everyone has a right to their own opinion—no one is stopping the Rowes from teaching their terrible transphobia to their children in the comfort of their own home.

But when their kids take that behavior to school with them, it’s unacceptable and has long-lasting ramifications for the bullied children and their families. And when parents like the Rowes try to inflict their personal opinions on the classroom and make the school acknowledge their intolerance, that’s asking the school to condone bigotry.

As sad as I am for the Rowes’ children that they are having their opportunity to experience diversity taken from them by their parents, for the safety and well-being of the remaining students, I can’t say I’m sorry that Nigel and Sally Rowe won’t be part of the parents’ association or attending the school play. There is no place for their so-called “beliefs” today.

gender is like comics, if you only think the Big Two exist you’re unbelievably fucking tedious

(via the BBC, image: screengrab)