Review: I Ship It Is The YouTube Tale Of A Pissed Off Hufflepuff And The Power Of Wizard Rock 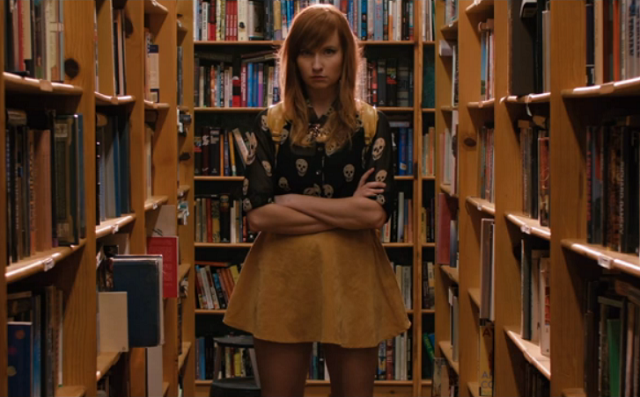 Wizard rock bands are one of those special aspects of the Harry Potter fandom that make me smile. Like fan fic and fanart creators, wizard rock bands take the Harry Potter canon and write songs about it. Sometimes it’s about actual settings or characters, but sometimes it just uses themes from the books (like love and heartbreak) as allegories. I Ship It is a short film about one girl’s chance at wizard rock stardom, emotional closure and maybe a little payback. Or a lot of payback.

Zoe (Wiles) has been singing Harry Potter duets with her boyfriend Peter on YouTube, but her heart gets crushed when said boyfriend (played by A Very Potter Musical’s Joey Richter) not only breaks up with her after cheating, but then starts making videos with the girl he started seeing on the side. When a wizard rock battle of the bands is announced and Peter is slated to perform with his new girlfriend, Zoe enlists the help of her friend Charlie (Persaud), who also just went through a break-up, to write the perfect song of revenge so they can decimate Peter, find some dignity in the heartache, and maybe even win the contest.

A big benefit that I Ship It has is Wiles’ chemistry with costar Persaud — as I mentioned earlier, they previously starred together in the charming seven part webseries Kissing in the Rain, and the two of them continue to be charming here. Charlie is wallowing in his post break-up melancholy that another actor could have made annoying, but Persaud brings enough charm to the table to pull it off. Plus, Zoe only lets his wallowing go so far before she decides it’s time for action. While there are certainly hints at (and actual evidence of) romantic feelings between the two of them, at its core Zoe and Charlie’s friendship has a comfortable, worn-in dynamic… like, say, a favorite sweater in yellow and black, perhaps. Why yellow and black, you ask? Why, because Zoe is a Hufflepuff!

Well, she’s a Hufflepuff as much as anyone outside the Harry Potter universe can be a Hufflepuff, choosing the House that fits one’s personality as one is wont to do in the Potter fandom. This is where the film really grabbed me, because in recent years I’ve embraced my own Hufflepuffiness. I don’t see being hardworking and kind as bad things, and I will defend Hufflepuff House to my dying breath. And my god, it was cool to see the protagonist of a Harry Potter fandom film be a Hufflepuff. It works because she is actually written with the Hufflepuff traits: hardworking, patient, and kind with a belief in fairness.

A lot of these traits happen to be part of what her ex exploited during their relationship (she was the one writing all the songs, playing guitar, doing all the work on their videos, and even running his Twitter account) but they’re never seen specifically as weaknesses. In fact, my favorite moment of the film is a tense exchange between Peter’s new girl and Zoe right before Zoe performs. The girl smirks at Zoe’s yellow and black outfit, saying “So… you’re a Hufflepuff?” and a jaw-clenched Zoe replies in the calmest voice she can muster, “Only on my better days.” And then that Hufflepuff goes on stage and kicks some wizard rock ass because yeah, Badgers will mess you up.

Richter’s Peter is the kind of antagonist you start resenting right off the bat. Peter clearly coasted on his surface charm when they were together, and then took their thousands and thousands of fans with him after the breakup. The fact that he’s singing Zoe’s song with “his new Ginny” only rubs the salt a little deeper into the wound, and you get the sense that he knows how much it’s hurting Zoe. Old videos Zoe watches of their time together show him as a seemingly-doofy nice guy, but his apathetic smugness oozes out of him the night of the concert. Towards the film’s beginning, Zoe mentions that Peter looks like Harry Potter (the Harry to her Ginny, as she says in her song); but, in a nice moment at the concert, she admits that he doesn’t look much like Harry at all, now that she thinks about it (which has a meta layer to it since Joey Richter was actually Ron, not Harry, in A Very Potter Musical). Zoe saw what she wanted to see in him and what Peter wanted her to see, but once they stop being together the facade drops quick.

My only disappointment with the antagonists is that the new girlfriend Macy (Jenna Johnson) is written relatively one-note. The film is short, and I get that some characters aren’t going to get a lot of depth, but the “mean girl” persona leans towards the obvious. The bad girl cliche isn’t helped by Macy dressing in Slytherin colors, and I must add that placing the jerks automatically in Slytherin is a fandom faux-pas (although I thought Peter wearing a Gryffindor tie to the concert was kind of hilarious since he’s unoriginal and probably didn’t put any thought into his sorting. He wants to seem like a good guy, so of course he picks Gryffindor).

The direction (by Yulin Kuang, who also wrote the script) is clearly inspired by Edgar Wright’s Scott Pilgrim vs. The World. I didn’t mind the allusions to Scott Pilgrim for a few reasons. First, there are only really light touches of the other film’s style; it’s most prominent in the Battle of the Bands scene, but even then it’s just a few visual flourishes, some sound effects, and the framing of Zoe’s performance. Two, if you’re going to homage Scott Pilgrim, you might as well do it in your wizard rock band comedy. Three, I had just watched Tony Zhou’s analysis of Edgar Wright’s directing style. Since the crux of Zhou’s video is that he wished more comedy directors would go outside the box and be more creative with transitions and framing, I don’t see it as a bad thing that Kuang took inspiration from one of Wright’s movies, especially a movie I happen to think is really fun and pretty.

Since it’s only a 20-minute film, the soundtrack is rather short at just two original songs (with the first song reprized towards the end), but both songs are beautiful and happen to give outsiders a nice little look into the kinds of songs that come out of the wizard rock community. “Honeydukes” is a sweet little duet Zoe writes for Peter during their time together, but Zoe’s rebellion song “Horocruxes” is easily my favorite of the two — Wiles is vicious and brilliant on the vocals (the full band version released through Bandcamp edges out the film version by just a hair thanks to pure rockability).

In the end, I Ship It manages to avoid most rom-con cliches. The possibility that Zoe is attracted to Charlie is brought up very early in the story — the fact that it’s addressed quickly instead of being dragged out threw me for a loop, in a good way. Also, despite her scathing performance at the concert, the plan to “ruin Peter Hackett” doesn’t quite happen the way Zoe hopes. I’m more than okay with this choice because in real life, jerks don’t always get their comeuppance, even when we try to give it to them. It’s that fact, and the openended-ness of the film, that safely maneuvers I Ship It away from the saccharine conclusion we might expect. Not to give away the entire ending, but they don’t go for the easy resolution, vouching instead to suggest that our Hufflepuffian protagonist did learn more about herself along the way, and that’s satisfying in itself. It doesn’t feel like a cheap resolution… although I will admit the last line of the film is a little cheesy and on the nose, but it’s forgivable. I’ll let it slide.

I Ship It is a fun, quick little movie that is well worth your time if you’re a fan of any of the actors or if you’re a part of the Potter fandom. Plus it’s online for free — you have no excuse not to check it out.