Review Greg Weisman's Rain of the Ghosts | The Mary Sue 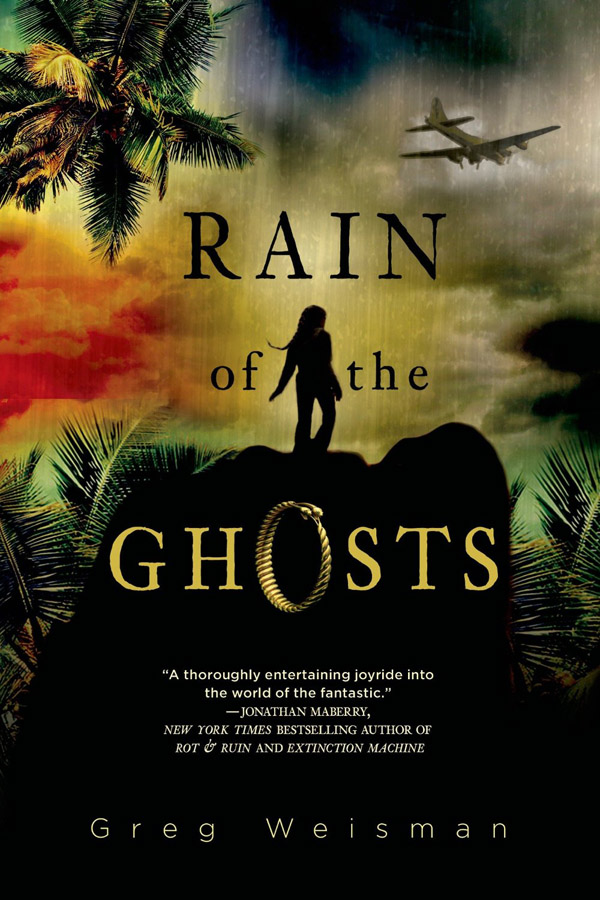 Rain of Ghosts features a headstrong and affable female hero, supernatural forces, an ethnically diverse cast, banter, and hidden mysteries. If all of that isn’t enough to entice you, this novel is written by Greg Weisman. The creator of the 1990s Gargoyles cartoon, Weisman has also been show runner for the cartoon series The Spectacular Spider-Man, W.I.T.C.H. and Young Justice, and is now executive producer of the upcoming Star Wars Rebels. Now he’s released the first of a young adult series featuring Native American teenager Rain Cacique.

Without giving away any serious spoilers, Rain of the Ghosts is set in the modern day on the Prospero Keys, a fictional group of islands on the edge of the Bermuda Triangle, known to its inhabitants as the “Ghost Keys.” Surrounded by jungle, the city of San Prospero is a big tourist attraction and home of Rain Cacique. She and her best friend Charlie Dauphin are enjoying the last days of summer break before school starts again, but things start getting pretty strange. Over the course of a couple of days, Rain experiences visions of a dark man, encounters a mysterious stranger, and loses her grandfather Sebastian Bohique. Before his passing, Sebastian left Rain a bracelet of two snakes consuming each other’s tails. Now she’s seeing ghosts and has to solve a mystery dating back to World War II, the first of several adventures she’ll have to embark on to complete a larger quest.

As is to be expected on a group of islands named for Shakespeare’s sorcerer, supernatural forces abound. Along with this, the story utilizes the mythology of the Caribbean while building its own. But this isn’t Harry Potter’s world or Narnia. Rain of Ghosts is grounded in a familiar world, which winds up highlighting just how strange and special Rain’s experiences are. You come close to believing the Ghost Keys are a real place you could visit yourself.

With shows like The Spectacular Spider-Man and Young Justice under his belt, Weisman is experienced in handling young characters. Rain and her friends are inexperienced and maybe naive at times, but they’re not dumb or rebellious without reason. Rain is a character constantly growing and learning. We need more heroes like her. Considering how the book ends, it’ll be interesting to see how she develops as her saga unfolds.

Another cool thing about Rain of the Ghosts is its diversity. Charlie is African-American and Miranda Guerrero, a new friend to him and Rain, is Hispanic-American. In fact, most of the other characters encountered in the book are people of color. This nicely reflects the story’s setting and makes it stand out from a lot of other books on the shelves right now. There are a couple small areas in the book where a description seems more akin to a screenplay than novel prose, but that doesn’t make this story any less enjoyable. I’m personally very curious to see where things go next for Rain Cacique and her friends.

Rain of Ghosts is available at Amazon and local book stores. The second book, Spirits of Ash and Foam, will be released on July 8.

Alan Sizzler Kistler (@SizzlerKistler) is an actor and writer. He is the author of Doctor Who: A History.