Review: Guardians of the Galaxy: Collect Them All | The Mary Sue

Review: Definitely Collect Guardians of the Galaxy: Collect Them All 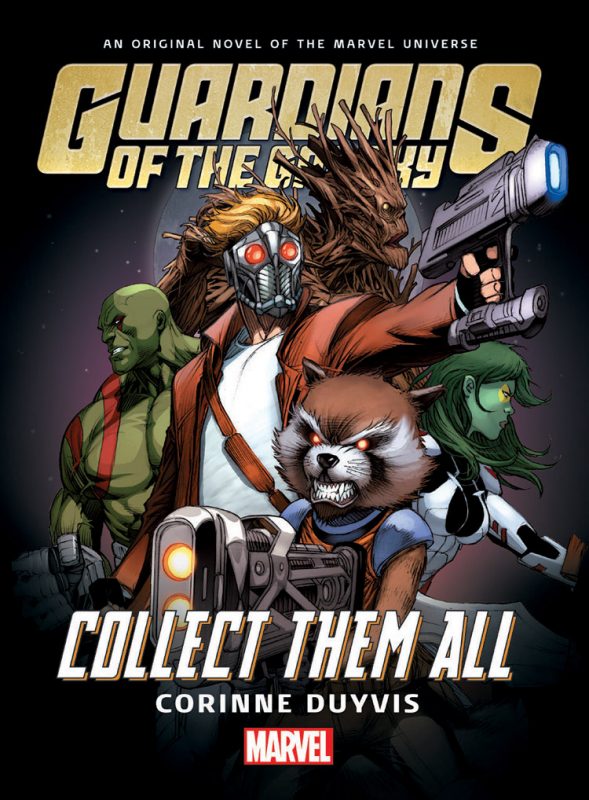 The Guardians may be all about shenanigans in space, but they’ve also always dealt with questions of identity. What does it mean that Star Lord is only half human? Can Gamora ever move on from her bloody past? Will Drax ever have the chance to have more of an identity than being a vessel for revenge? The one member of the team who’s always seemed to have his idea of self really together is Groot. Hell, everything he says confirms he know exactly who he is.

In Corinne Duyvis’ new book, Guardians of the Galaxy: Collect Them All, we get to look at a galaxy that’s suddenly full of Groots, leaving our favorite tree-man wondering who exactly he really is. But how do we get started on this wild ride?

So, the Collector has decided to make himself a Guardians of the Galaxy tribute band. It was easy enough to pick up an Earth raccoon and a green lady to traumatize into being a new Gamora, but the real trouble comes when he takes some shards of wood from the site of a Guardians battle and starts growing his own Groots.

All these new Groots have the same memories of the one running around with Guardians. Can any of them be said to be the REAL Groot? It almost doesn’t matter. The Groots are being sold off all over as slaves, gladiators, and assassins. The Guardians have to hurry to rescue a friend who is simultaneously in all sorts of trouble and right next to them. Besides that, there seems to be a limited amount of Groot energy to go around. With every new Groot that’s grown, all the others become weaker.

Another concern is Kiya, the Collector’s former enslaved assistant and Gamora-in-Training. The Guardians need her help to fuse the Groots back together again, but neither side knows if they can trust the other. Kiya has been implanted with cyborg enhancements and trained to be a deadly, merciless fighter like Gamora, but all Kiya really wants is to live a free and peaceful life. Unfortunately the Guardians have already promised to turn her back over to the Collector. On the other hand, once the Guardians meet Kiya and realize what hardships she’s been through they want to find a way to help her. That is, if she doesn’t stab them in the back at the first chance she has to run away.

The author, Corinne Duyvis, commented a bit on what her plans for themes were as she was writing.

“I focused primarily on the characters and their conflicts. Those conflicts let me explore some themes I’ve also played with in my other novels, like identity or trauma; these themes fascinate me, and I loved weaving them into the story and the character arc, but I did try to keep the focus squarely on the individual characters rather than getting too abstract and philosophical. First and foremost, this novel had to be about plot, humor, and characters.”

Collect Them All is a compelling story about identity and trust. It’s also about explosions, mad chases through space, and a snarling raccoon with a gun. It’s a book that a reader can take a lot from and still feel like they were a roller coaster the whole time. Gamora kicks ass, Star Lord flirts, Drax punches his way through “impenetrable” armor, and Rocket takes juuuust a little too much joy in shooting people down. The Collector also serves as an excellent villain. He never seems very powerful, but he is unstoppable. Break his ship, shoot him endlessly, send him to the other end of the galaxy; it doesn’t matter. He’s still right behind you with a smile on his face.

This book was a joy to read from start to finish. I highly recommend it for any fans of the Guardians of the Galaxy, superheroes, or sci-fi in general.

Alex Townsend is freelance writer, a cool person, and really into genderstudies and superheroes. It’s a magical day when all these things come together. You can follow her on her tumblr and see her comments on silver age comics. Happy reading!