It sometimes seems that the media is inundated with think-pieces about Millennials. They’re entitled. They’re lazy. They destroyed the paper napkin industry and the bar-soap industry and they eat too much avocado toast. They never look up from their phones and they care too much about social media and social justice.

The Millennial refusal to toe the socio-political line may look frightening to people with a lot at stake in the status quo but for others, it looks more like an opportunity to transcend the boundaries of the status quo. This is the basic premise of Ales Kot and André Lima Araújo’s new Image book, Generation Gone. The particular superpower of Millennials is their ability to survive, even find new ways to thrive, in a world where the deck is increasingly stacked against them. 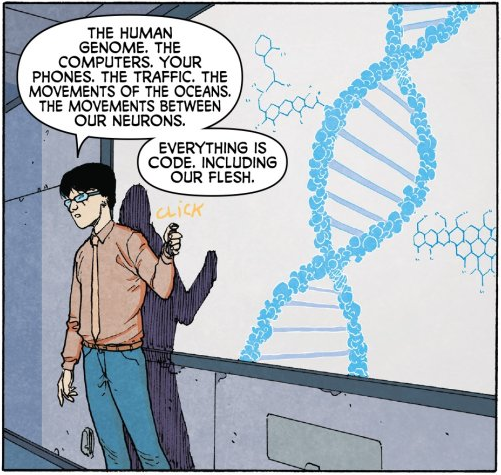 Mr. Akio, who works for a tech corporation deeply entrenched in the military-industrial complex, believes he has made a revolutionary breakthrough in human cognition and ability. He believes he has discovered a way to hack the brain and create superhumans. And he wants to test his theory. Enter Millennial hacker trio Baldwin, Elena, and Nick. They are dreamers, striving for big ideas, better lives, a more egalitarian world, while simultaneously just trying to get by. Each is a character study in a very specific kind of hope. 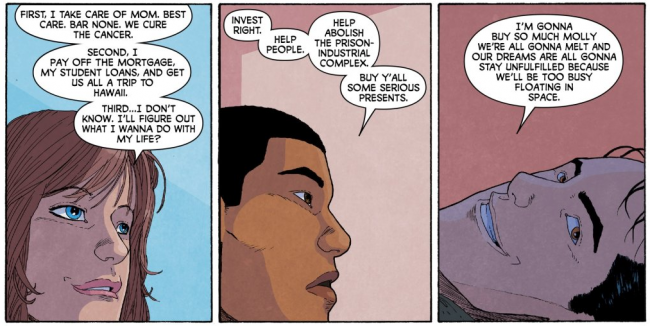 You’re going to want to hate Nick. Nick is a, well … a word that rhymes with Nick. I can’t imagine this isn’t intentional. He’s cocky, grandiose, and at times thoughtlessly cruel to his girlfriend, Elena. But I sense a wallop of character development—or perhaps a cautionary tale—in Nick’s future. Attentive readers will notice details about Nick’s home life that may incline them to a bit of sympathy. I encourage readers to keep an open mind and trust that Kot and Araújo are taking Nick somewhere productive. I suspect nothing in this oversized first issue is exactly what it seems.

Elena is much more grounded than Nick, out of tragic, urgent necessity. She works two jobs to support her cancer-stricken mother. Their close relationship is sketched out in a few earnest pages that genuinely made my heart break for her. Where Nick is arrogant, Elena is cautious. But Elena’s inner strength makes it difficult to feel pity for her. She isn’t meek or tractable, she just has bigger things to worry about than Nick’s impatience. She doesn’t necessarily want to break the law, but she’ll do what she needs to do.

Baldwin comes across as the stabilizing force of the trio. He’s methodical, reliable, what the Marines might call “squared away.” His motivation for hacking isn’t fame, like Nick. It isn’t even stability, like Elena. Baldwin dreams of being a force for positive change in society. As a young black man, there are specific racial injustices that are part of Baldwin’s reality, and the montage of him cleaning up after his friends, working out, drinking a green smoothie, seems to remind us that Baldwin could do everything right and still lose. So why not do some things wrong in order to ultimately level the playing field? 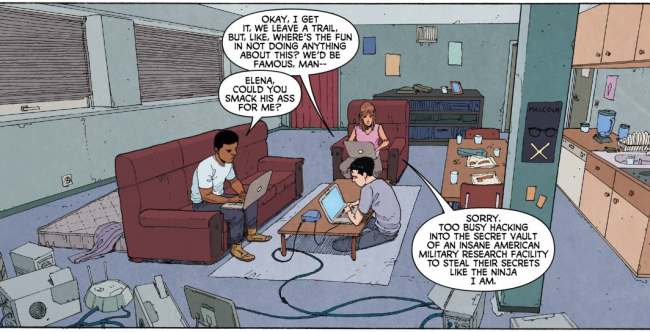 Kot and Arújo present their cast with exceptional sensitivity, filling pages with silent moments that create poignant portraits of these young people. Their dialogue speaks volumes about the person speaking as it furthers the plot. World-building in a sci-fi book is always important, but the strength of this first issue of Generation Gone is how much it invests in establishing its characters as real human beings.

Tia Vasiliou is a digital editor at comiXology, and co-host of the weekly Facebook Live show, The ComiXologist Live. You can find her on Twitter @PortraitofMmeX.