Review: You’re Invited to the Heart-Stopping Terror Party in Five Nights at Freddy’s 2 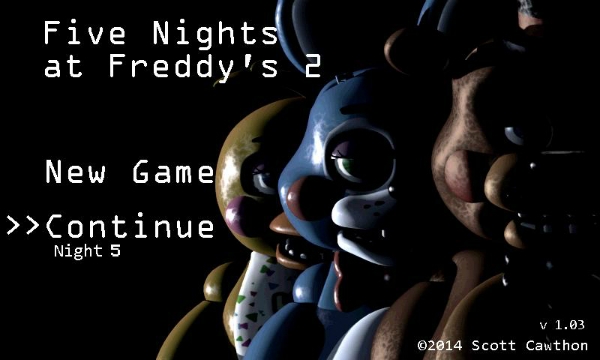 Leave the lights on and make sure that your stuffed animals have their fluffy limbs tied before you play Five Night’s at Freddy’s 2—we don’t want them squiggling around and creeping behind our backs.

After watching bits and pieces of people’s Let’s Plays of the first installment of Five Nights at Freddy’s, I figured I would give it a go and try out the new one. I eat up these jump-scare horror games, and Five Nights at Freddy’s 2 is a one-hit punch that would either keep someone coming back for more or admit defeat. I’m not a masochist, but I fall under the former.

The game follows the “something-scary-is-going-to-burst-in-front-of-your-face” formulaic horror trope. I’m beginning to wonder if developer Scott Cawthon was inspired by the popular flash maze games that revealed the rotting demonic face of The Exorcist girl, because the premise of Five Nights is similar, except animatronic animals with names like “Freddy” swallow your screen with their gaping mouths, corrugated teeth, and psychopathic eyeballs.

Unlike its predecessor, Five Nights 2 is more determined to beat the player to a pulp with its new gameplay setup, which is explained to me in a two-hour long voice message by your character’s boss—that’s a world record voice-mail right there. The boss clarifies that the animatronics do walk around and they are programmed to attack anyone who has a criminal record. Aha! So does that make the character a slimy felon?

This leads you to the office. There are no doors, just vents which can you flash via the vent lights, your flashlight with limited battery, and a Freddy mask. When I first found out that there are no doors for me to close in the second game, I became slightly more irritated than frightened, because this makes the game more challenging than the original. Regardless, I accepted this new level design and to my surprise, I found myself preferring it to the original, because I was so disquieted to the point where my adrenaline kicked-in to full effect, which made my auditory sensors and hand-eye coordination more agile.

There are two new features that I will not forget from Five Nights at Freddy’s 2: 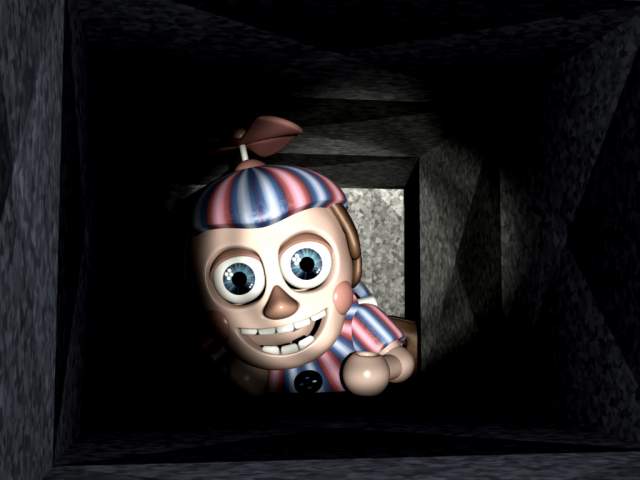 Also known as the notorious “BB”, this fella is ready to party it up with you by sneaking up into the office and permanently disabling your flashlight, as well as both the left and right air vents’ light switches, until you have reached thn end of the night. The only way to deter this bad boy is by donning the Freddy Fazbear Head. BB usually scuttles away once you have the mask on, and, I don’t know if this is intentional, but he is usually found dawdling around the left air vent. If perchance you do see him in the vent, I am telling you now: do not check your monitor, because that would be it for your lights.

2. The Wind Up Music Box 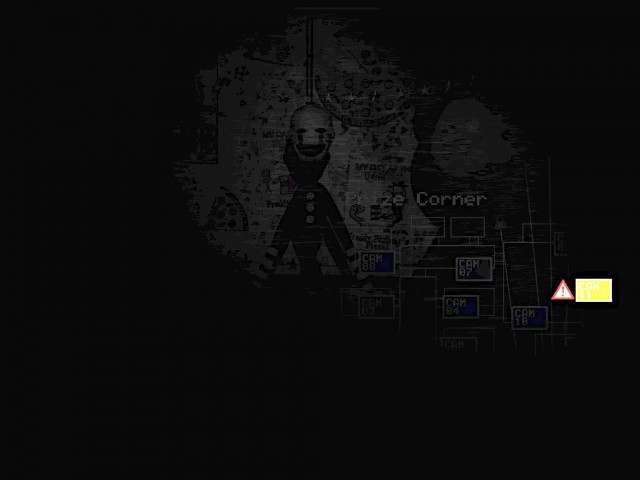 Oh dear, oh dear. Where do I start with this one? This is the second game mechanic that has perpetually put me in a place of anxiety. I have not seen “The Puppet” yet and I do not wish to see this malignant nightmarish ghoul resembling that of Kaonashi or No-Face from Spirited Away. Once you flip to the screen with all the security cameras, check out CAM 11 and there will be a button you can hold to wind up the the music box. During my first play, I focused all my attention to the music box, and then on the second run, I completely forgot about it until a warning sign popped and started blinking. I was almost curious as to what would happen if I had just ignored the music box, but I chickened out. All I know is that if the music halts and the infamous “Pop! Goes the Weasel!” starts playing, then I recommend just hitting that there escape button.

Overall, Five Nights at Freddy’s 2 has exercised my lung capacity from holding my breath to belting out thunderous yelps. The line that delineates between my angry scream and almost-pooped-my-pants scream is measured by how many f-bombs I’m dropping. (More than three qualifies for angry). If this game can rile me up that much, then I know for sure it’s a keeper. Regardless of the back-to-back jump scares and some pit stains I have contracted, I still thoroughly enjoyed playing the game for its nitpicky gameplay as well as its conspirative narrative.

What I find so terribly clever about Five Nights at Freddy’s 2 is how developer Scott Cawthon delivered the game. The first game was released back in August, and it is still generating roughly around$15,000 daily from the Apple App store – and that’s excluding the PC sales. Even Mr. Cawthon himself was shocked at the unexpected and successful turn-up of Five Nights at Freddy’s. Now, I do not know if Scott had intended to release the sequel immediately after the first one, but hot damn, he did it right.

At first glance, Five Nights at Freddy’s may just seemingly look like one of those one-hit wonder short horror games like Slenderman. No. Take a closer look. Having established itself as a sequel, Five Nights at Freddy’s 2 opens up a new can of worms that Cawthon has purposely placed to further develop the contiguous narrative of the first Five Nights at Freddy’s. But he does this with such subtle eeriness, so that the narrative does not hold your hand. Instead, with the little clues Cawthon speckles here and there, it is up to the player to piece the mystery together.