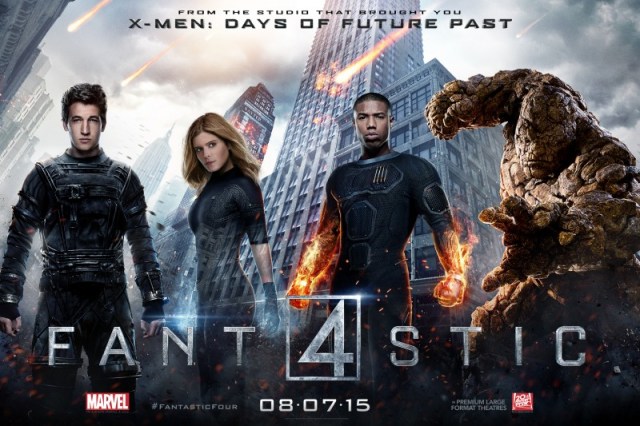 Fantastic Four, the reboot of the superhero team we last saw in the 2005 two-picture franchise, is arguably a better executed movie than those two, but if I were being forced to choose, I’d rather rewatch the previous films than the new movie again. The 2005 film at least has some baffling moments of “I can’t believe this is a movie” quality, which can make it a good-bad movie for group watching, whereas this film is such a monumental bore. It doesn’t even have the fun factor to make it worth my time or money. There might not be much technically wrong with it, and there are clearly skillful people behind it, but as an overall experience, it just can’t hold an audience’s interest.

Which is too bad, because they certainly have stacked the cast with some very talented actors who are making an effort. Michael B. Jordan comes out the best perhaps as Johnny Storm, because he actually shows some personality that connects to Johnny’s flashy attitude (although the writers have downplayed a lot of that). Kate Mara’s character, Sue, has a few moments but really is relegated to the sidelines for a lot of the film … she isn’t even part of the launch that leads to the characters getting their powers.

Although the sibling relationship is oddly restrained, Reg E. Cathey is very good as father to both Mara and Jordan. But Miles Teller, who we know can play arrogant and narcissistic characters very well (his character in Whiplash for example), is so clearly in hero mode that it’s a quality absent from Reed, and his character is therefore nondescript. Jamie Bell has about four scenes before becoming Thing and is completely wasted (shamefully, considering what a good actor he is). And if Thing was a motion capture performance by Bell, it really doesn’t work.

Actually, while this movie might be technically better written and performed than its predecessor, it doesn’t look great for a summer blockbuster (especially considering its $120M price tag). It’s dark from start to finish, and a lot of the effects play goofier than the super serious tone requires. Part of the reason Christopher Nolan’s Batman films (which this movie borrows a lot from) had to use more practical effects was because realism was such a necessity to maintain a consistent tone. This movie is humorless and serious throughout (with a bunch of dour 18-year-old geniuses), and then we see bad effects that take us out of it completely. Some of the worst looking scenes are on Zero Earth (the planet they go to on their intergalactic journey) which was designed to look like it was made out of slime from Ghostbusters. Had the film been somewhat funny or faster, this techno planet might have been easier to sell, but here, it just seems poorly designed—especially because it was the one opportunity to really infuse some vibrant color and wonder into the dark and moody movie.

The film’s lack of vision is apparent from the very beginning. Chronicle is a really solid movie, which has almost an anti-superhero theme. Co-writer/director Josh Trank dances around those ideas (one of the characters calls Reed insane, another wants to use his powers) but not for long. And I get the sense that while Trank relished getting the big budget franchise, the obligation to make it into a superhero movie was something he resisted too long (there’s barely any action, and we rarely get to really see and explore their powers). The only character who has some interesting dialogue about these issues that Trank’s clearly interested in exploring is Toby Kebbell’s character, Doom. His scenes are ridiculous (and the character design beyond weird), but these scenes are at least interesting to watch because of the sheer intensity and conviction of his character—a conviction that is noticeably lacking in everything else.

The whole thing reeks of obligation and is completely void of a real sense of passion. I have no idea if the problems stem from the three writers involved, Trank’s direction, or the classic studio interference and demand to leave things open for sequels, but there’s no clear vision moving things along. Sure, we can talk about how the colorblind casting got a good actor like Michael B. Jordan into the movie, and everyone who sees this should be glad he’s bringing some charisma to the underwritten part.

But he’s a good actor in a movie franchise that isn’t just bad—it’s completely forgettable, and Jordan and the rest of the talented cast deserve better than this bore. For that matter, so does Trank, who, like Colin Trevorrow, made the move from indie to blockbuster director without the power and experience to maintain a singular point of view that filmmakers like Spielberg or Nolan enjoy and use to improve on franchise films. I see none of the passion for the characters or themes of the Fantastic Four in this movie from Trank, and there’s a sense of seeming almost disgruntled by the obligation to make a movie about superheroes, rather than just turn it into a science fiction movie.

Maybe Fantastic Four just doesn’t work on the screen. Perhaps it’s the comic book equivalent of The Great Gatsby—it just can’t be translated to cinema. But considering the world we saw in Guardians of the Galaxy last year, it would be hard to imagine that in Marvel’s hands instead of Fox’s, this couldn’t have been less of a slog to get through. There would have at least been some jokes.

Perhaps it’s time Fox did what Sony has with Spider-Man and work with Marvel’s Cinematic Universe. As it is now, I really can’t recommend giving your money to this movie, even out of curiosity about what happened. It’s just too boring to merit even a bad movie watch.