Review Extraterrestrial Worse Than Being Probed By Aliens | The Mary Sue

Review: You Should Probably Pick Getting Probed By Aliens Over Seeing Extraterrestrial 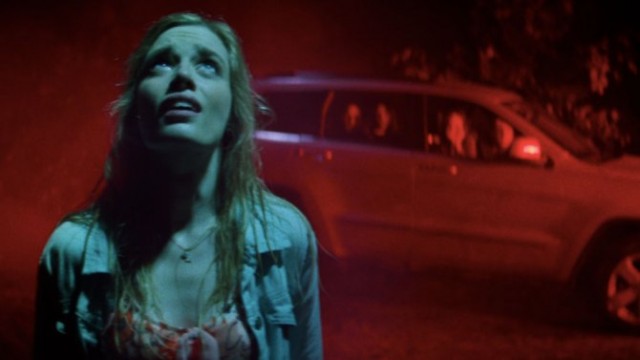 Extraterrestrial starts with an impressive prologue which is at once shocking, scary, and darkly humorous, suggesting the possibility that this could be an original (or at least refreshing) take on the alien genre. Unfortunately, the film’s process proves sporadic at best; and by the end, I was almost angry with writers The Vicious Brothers and director Colin Minihan for wasting my time. The film becomes a repetitive mess of clichés and mind-numbingly boring and unpleasant characters. If you’ve seen an alien abduction film, or know the clichés of what they can do (mind control, levitation, probing) you’ve seen this movie, probably done with considerably more style and thought.

The film begins with a surprisingly blunt abduction in a small town which seems to be experiencing a series a supernatural horror. A local sheriff (Gil Bellows) believes there is something out there, and hopes it will lead him to the missing wife most believe left him. He warns the loud (and annoying) teenagers visiting the town against spending the weekend at April’s family cottage. As one would expect, the five friends discover they are in the middle of an alien invasion, and become the target of the visitors’ rage for absurd reasons. With the exception of Bellow’s sheriff and the pot-smoking Travis (Michael Ironside), the teens are on their own to avoid abductions.

We’ve seen all of this before, and for the most part Extraterrestrial is little more than a rural set version of Skyline, which itself was repetitive of Battle: Los Angeles (none of which could be described as good alien films). This includes the ridiculous choice to make this film partially found-footage. That artistic choice doesn’t even last long, which is where my frustration with this film began.

The acting is on the level of most cheap found footage films; but by not being consistent with the visual choice, the performance are just bad. All five young actors don’t understand that stylized genre acting does not equal overacting. Brittany Allen (April) comes off best, while Jess Moss gives the most irritating performance as one of her friends. Despite the obvious attempt by the filmmakers to make him so unpleasant a character that he somehow deserves what he gets, there is no catharsis and pleasure in watching his torture at the hands of nameless, faceless, motivation-less aliens.

Ironically, the bad acting is not improved by pairing these bad performances with more talented veterans; it only serves to illuminate their failures. Michael Ironside is a master of stylized acting, and Gil Bellows avoids over-acting by playing it straight. The only scenes which work are the ones featuring these two alone – although those scenes seem to exist in a completely different movie. Both Ironside and Bellows are completely wasted in a movie this bad. This is especially true of Bellows, whose presence on film I always look forward to, though he does put forth an effort to elevate his character’s scenes and give some emotional depth. The times we cut away from his character in favor of these teenagers made me hate them even more.

This is especially frustrating considering the engaging theme surrounding Bellows’ character: the anguish of not knowing what has happened to a loved one. That simple concept does reflect our fears; not only of the great unknown, but also of life and death itself. Bellows’ anguish over his wife’s disappearance, the torture he lives with, is powerful to see. A similar scene involving April is the only time, I would argue, we feel an emotional connection to her character. But ultimately (and to the greater detriment of the movie) the filmmakers are more interested in cheap thrills and special effects.

While I won’t spoil the end of this film, in case you actually want to see this (but seriously, don’t), I will say that it left me enraged that a potentially good, thematically satisfying ending was sacrificed simply to showcase set design and effects. To destroy the potential to leave the audience on a sober but thoughtful note shows the deficiencies in this generally unpleasant film, which is one of the least-enjoyable bad movies in recent years.