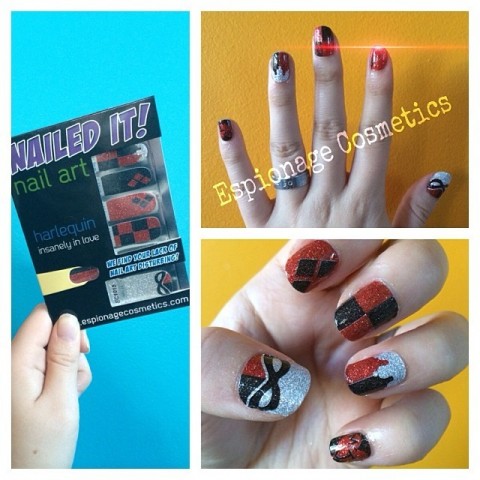 The following was originally posted on She Geeks and has been republished with permission.

Espionage Cosmetics has an amazing line of nail art wraps called Nailed It! that have been seen on geeks of all shapes, sizes, and genders (Wil Wheaton, I adore you). For those who aren’t familiar, nail wraps are essentially stickers you use on your nails in lieu of nail polish that can be emblazoned with all manner of awesome and intricate designs. Now, of course there’s some kick ass science-y stuff going on, but the easiest way to describe them is as a sticker. These things come in all manner of geektastic designs. Want nebulas on your fingertips? They got that. Looking to wear your dice bag on your nails? They got you covered. Legos? Chainmail? Circuit boards? Star Trek uniforms? Cat faces? They’ve got all that and more. Being the obsessive Batman fan that I am, I chose the “Harlequinn” set to test. So, join us as my friend, The General, and I attempt to pretty up my digits:

I ordered my nail wraps on a Tuesday evening, and by Saturday afternoon this slick-ass package was in my grubby hands: 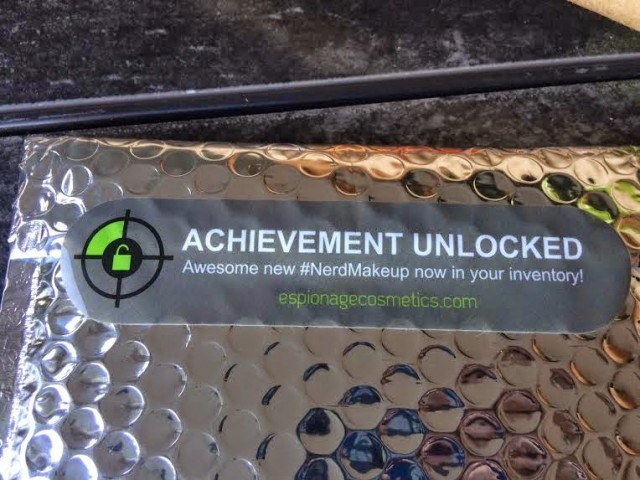 Popping it open revealed an equally adorable spy pack containing my nail wraps, a shiny business card, some EC stickers, and a card with more nail art options on it: 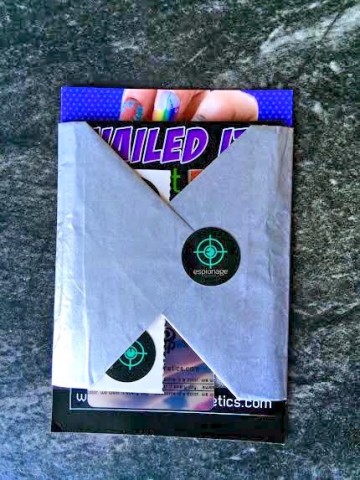 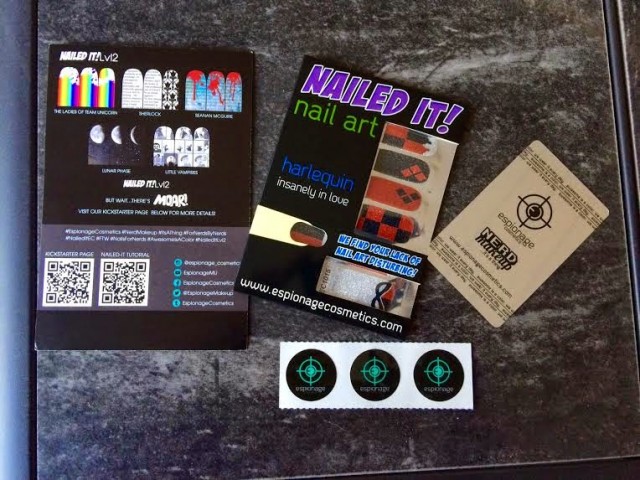 Quick tip: These guys do not use any more packaging than they have to, so try to contain your excitement when ripping into your nail wraps (my suggestion is to carefully use manicure scissors): 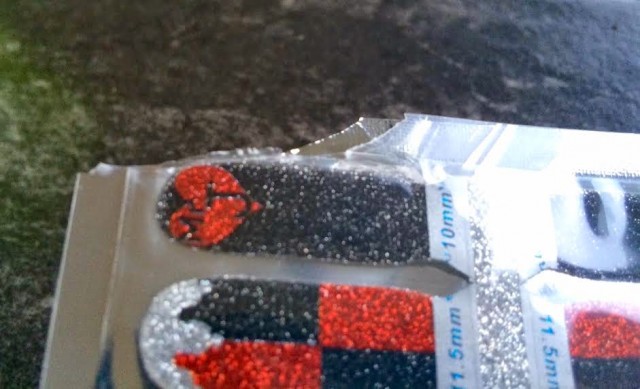 Now that you’ve got them open, take a moment to marvel at these beauties! 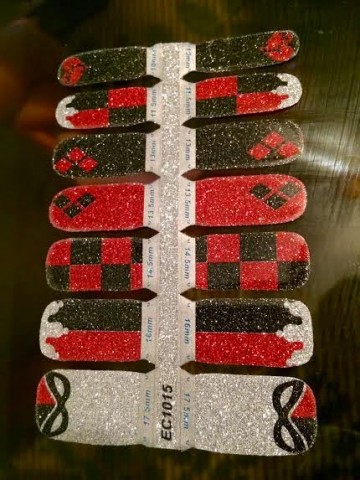 Here, unfortunately, is where things got tricky. I have freakishly small fingernails. Seriously, they look normal right up until you’re trying to do anything artistic to them, and then you find that they are both very tiny and very curved. 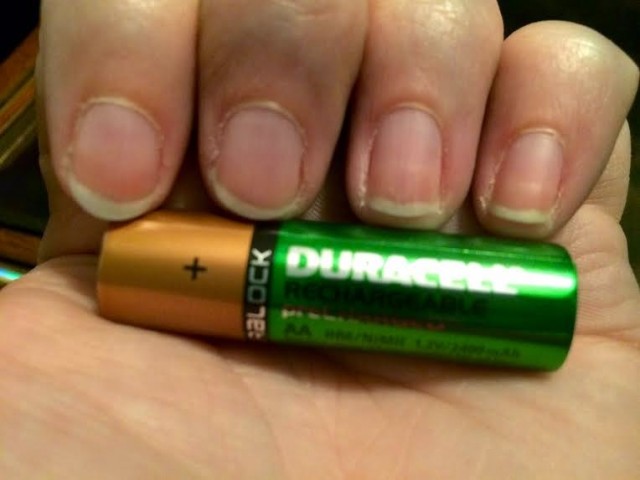 I might also be in dire need of a manicure. Sue me.

None of the wraps fit my nails without some pretty serious trimming. Sadly, because of the placement of some of the art, I couldn’t use all of the wraps without cutting right through the pretty designs (I was particularly sad that I couldn’t use Harley’s iconic diamonds). Luckily, each of the wraps is long enough that we were able to perform some ingenious nail wrap surgery on them to create a set that would work: 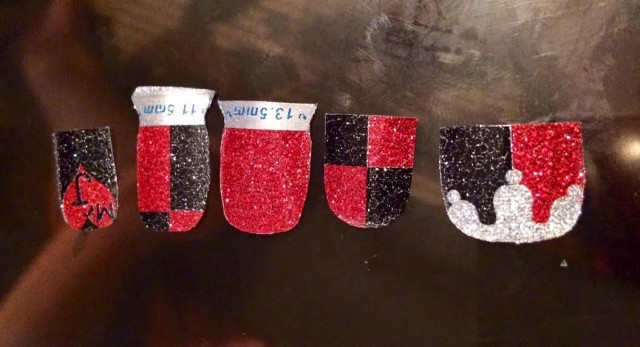 After a ridiculous amount of additional trimming, these would adorn my left hand. 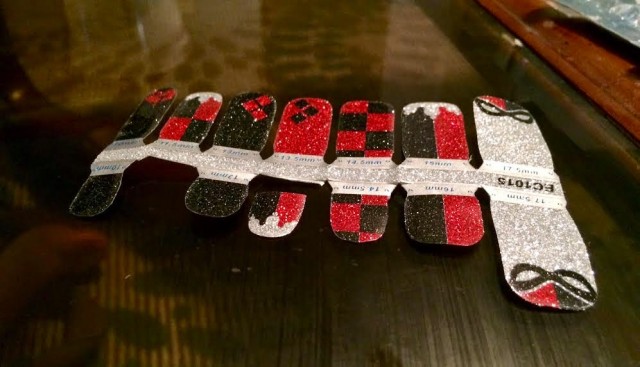 The set we created for my right hand, plus the untouched left overs we can later use as a whole second set.

IMPORTANT!! We learned a very hard lesson that I would like to save you from: Remove the upper plastic film before you attempt any trimming, cutting, or application. Trust me. That no blood was spilled in the hour it took The General and I to remove the plastic film from the already cut wraps is just short of a miracle.

With the plastic film mishap and the obscene amount of trimming and resizing we had to do to get them to fit my tiny nails, the process took an exhausting and frustrating 3 hours from start to finish. To be fair, this was the first time either of us had attempted to use nail wraps, and pretty much everything that could go wrong, did. I honestly believe that if the wraps themselves fit my nails better, we would not have encountered so many issues. I contacted Espionage Cosmetics to ask if they were considering offering the wraps in smaller/children’s sizes. They replied with the following within a day:

“Your timing is impeccable. We actually just finished our second Kickstarter last night, and one of our successful stretch goals was introducing smaller nail sizes. After development, testing, and production, it will probably be around Fall of 2015 that we are able to have these completely ready to go, but they are definitely in our future!”

Yay! I cannot wait to play with these again when they have smaller sizes! Until then, I’ll likely stick to designs that are repeated over the whole wrap (like the circuit board, Sherlock, or literary designs). Despite all the hassle of the application, once they were on I couldn’t stop staring at them. Seriously, they’re just darling: 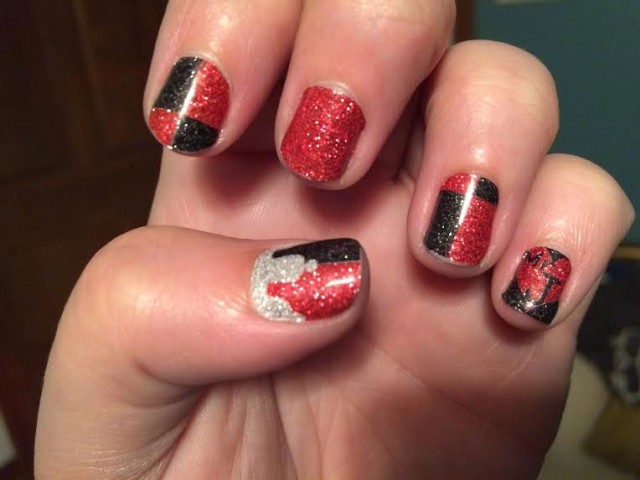 Left hand. I want a whole set of that thumb design!! 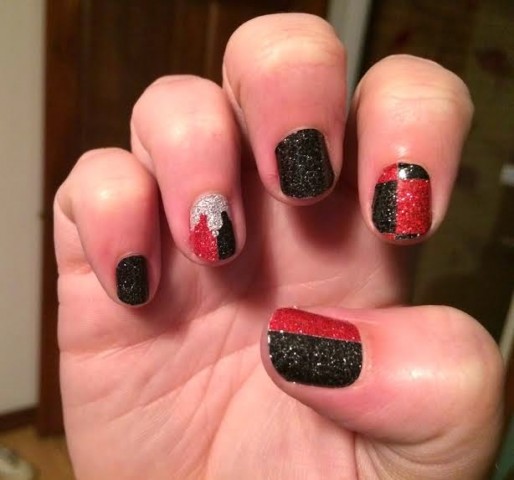