Five out of five lightsabers. 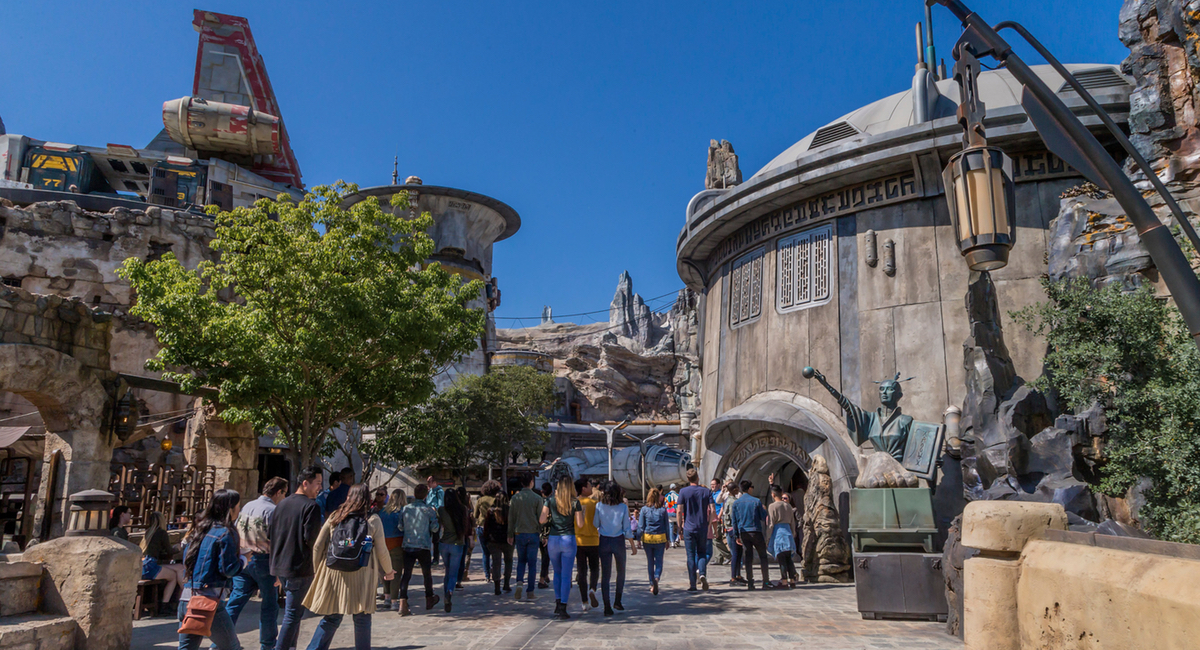 Walking down the streets of Black Spire Outpost, I forgot I was technically still on the planet Earth, in Disneyland.

With Star Wars: Galaxy’s Edge, Disney has gone above and beyond in the creation of a world and an experience. Yes, it is still a theme park—with food and toys and a ride that lets you pilot the fastest hunk of junk in the galaxy—but it feels like more. That’s probably because it is more. It’s less of a Disney theme park and more of an immersive LARP. Within five minutes, you’ll be giving vendors the traditional Batuu greeting of “Bright suns” and pretending like you’re a scoundrel, or a Resistance spy, or a First Order sympathizer.

Rather than set the park on a known planet, like Naboo or Coruscant, Galaxy’s Edge is set on the remote planet of Batuu, in the spaceport of Black Spire Outpost. This is to allow visitors to create their own story, rather than just playing at being Luke Skywalker or Ahsoka Tano. There are familiar faces, of course. Chewbacca, Rey, and Kylo Ren are all visible characters at the park, though they walk around interacting with visitors rather than just standing somewhere waiting to do meet-and-greets, but for the most part, Black Spire Outpost is a brave new world.

There’s even a story for the park, and it’s set at a specific moment in the galaxy’s timeline. The park is set just after The Last Jedi, as the Resistance regroups and the First Order tries to gain control over Black Spire Outpost. There are stormtroopers on patrol and Resistance officers trying to recruit for the cause, including spy Vi Moradi, who came into canon via the Captain Phasma tie-in novel by Delilah S. Dawson. Dawson wrote another book, featuring Vi, set at Black Spire Outpost, that will come out later this year, and I already cannot recommend it enough just for more Vi.

Trying to describe the energy of the group as we headed towards Galaxy’s Edge is nearly impossible. Personally, I was practically vibrating out of the Rey-inspired outfit I was wearing, hardly able to comprehend what was about to happen. I was five when Star Wars barreled into my life; celebrating twenty years of The Phantom Menace means celebrating twenty years of being a Star Wars fan. For years, I’d dreamed of going to the Star Wars galaxy, and until I write one of these movies, this is the closest I’m going to get.

I fully admit that, when I turned a corner and saw the Falcon, I cried. There is an embarrassing video of it.

Yes, there is a life-size Millennium Falcon parked at the spaceport. There’s a ride where you can crew the Falcon, though to what destination I will not say. You can either be a pilot, engineer, or gunner on the ship, actively participating on the ride. It’s fun, slightly challenging, and overall a total blast, though be warned that your performance there will impact some of the experience. I had a vendor say he heard I’d banged up the Falcon and to be careful of Hondo putting a bounty on my head. I replied that I’d never been a gunner before so I was still learning, and we had a great back-and-forth.

The cast members are one of the most magical parts of the whole experience. As I was walking towards the Falcon ride, I passed a cast member who ducked his head down as the roar of a TIE fighter soared overhead and muttered to himself (not to anyone in particular) that they were flying lower and lower these days. That’s a level of detail you can’t fake. He didn’t turn and wink as he said itl he just played along as though he were an actual citizen of Batuu. It caught me off guard, and I couldn’t stop grinning.

Cast members play along as though they are actually people living on the planet, rather than winking and nodding at the camera or just being theme park employees. They’re 100% in character the entire time, and it makes the world feel so much more real, rather than just being “Star Wars Land.” For a while, you can pretend you’re actually on Batuu.

I didn’t have a chance to sample all the delicacies on Batuu that I wanted to. I did try the Braised Shaak Roast (short rib with pasta and kale) and the Batuu-bon (chocolate cake), and it was damn good theme park food. I also swung by Oga’s Cantina for a cocktail, and the Bespin Fizz—which smoked and bubbled—was thoroughly delightful. It felt like a drink straight out of Star Wars, and I had a moment of just observing and pretending like I was stopping at the cantina after running a mission to Lothal for the Resistance.

While this might be a tall request to make of some, I would recommend playing along as much as possible. Let yourself buy into the immersive experience. Within five minutes, I was Kira (yes, I know, very creative name), a former holonet reporter who covered the New Republic turned underground journalist, exposing the First Order for the Resistance. When I met Vi, I told her this and she seemed to get a kick out of it; we had a stellar interaction that left me grinning from ear to ear. Was it childish to play at being a character? Possibly, but it made it so much more fun.

The vendors selling their wares aren’t just selling action figures and cheesy t-shirts. Many of the wares look like they’d be found in a Star Wars shop. There are plush Loth-cats that make noise, and rathars that rumble and move. There are tooka dolls and homemade-looking dolls of popular Star Wars characters, from Ahsoka to Finn. There’s an outfitters stall where you can procure Jedi robes.

The best is Dok-Ondar’s Den of Antiquities, where you can purchase Jedi or Sith holocrons, as well as other delightfully unique merchandise. Walking into the store takes your breath away; it’s so rich and delightful. Next time I’m there, that Jedi holocron and a kyber crystal will be mine.

Trying to summarize the experience neatly is difficult. I’ll admit, my first reaction to parts of Galaxy’s Edge when I heard about them was a healthy skepticism. Now, I’m a believer. I want to go back again and again, to try food from Ronto’s Roasters and drink blue milk and to build a lightsaber. I want to explore Batuu and face off against the First Order. If they wanted me to live there, I’d do so.

I remember being five or six years old, drifting off to sleep with dreams of being a Jedi and getting to fly in the Falcon. Galaxy’s Edge let me be that kid again, and I doubt that will stop with a few more visits.

For those interested in attending, Galaxy’s Edge opened to the public today at Disneyland Resort. It will require reservations until June 24, when it will be open to general audiences for the rest of eternity. The land will also open in Disney’s Hollywood Studios at Walt Disney World in Orlando, Florida, on August 29. Later this summer, a second ride will be added to the park: Rise of the Resistance. I cannot wait to go back and experience that.

Until then, Black Spire Outpost. Until then.