Review: 'Can You Ever Forgive Me?' | The Mary Sue

Review: Can You Ever Forgive Me? Gives Us the Female Anti-Hero of Our Curmudgeonly Cat-Loving Dreams

5 out of 5 Dorothy Parkers. 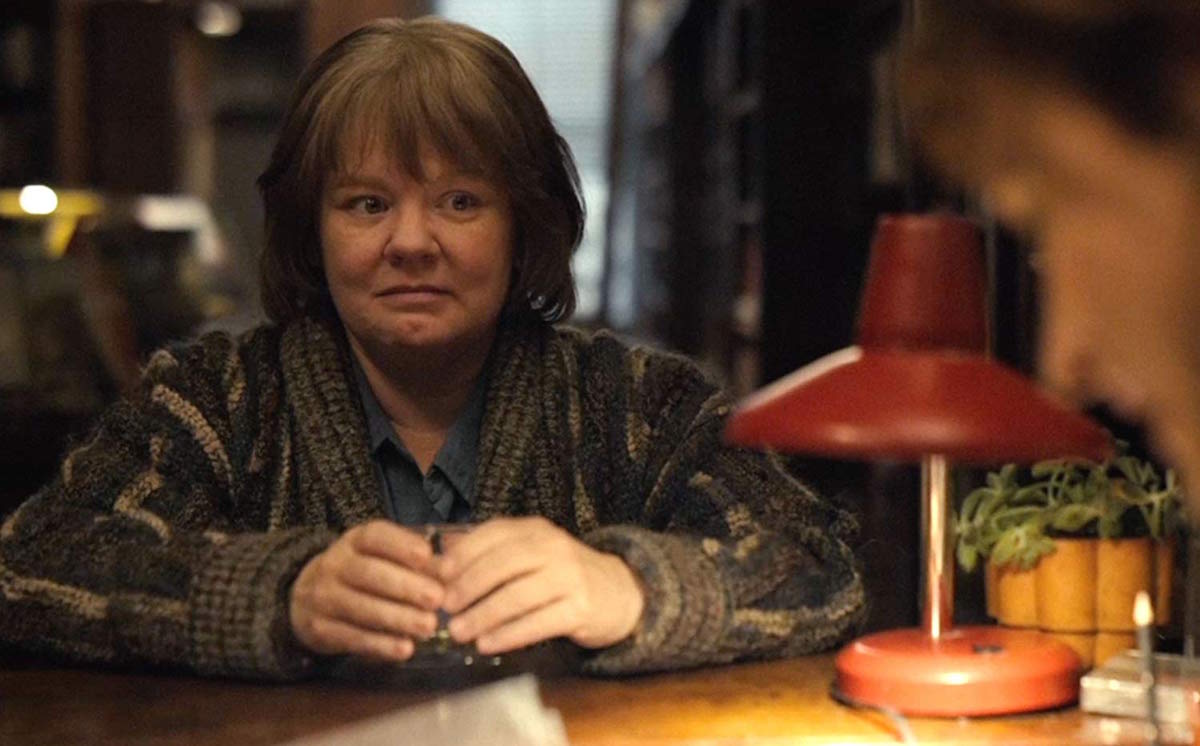 Thanks to Can You Ever Forgive Me?, the massive void of great female anti-heroes is a little less empty. This movie, and Melissa McCarthy’s stellar performance in it, hits on every cliche of the gruff, alcoholic, curmudgeonly writer on a level that rivals Hemmingway, but it also manages to be so much more. The movie is a buddy comedy, a crime caper, and an exploration of loneliness. And if pretty much every person involved isn’t nominated for a whole slew of awards, I will consider it robbed.

The movie is based on a confessional memoir of the same name by Lee Israel, a writer who struggled for decades to find her place in New York’s literary world. She spent the 1970s and 80s writing biographies and it’s not that she wasn’t a talented writer, but by the 90s, no one wanted biographies of Fanny Brice from a non-famous writer with a skill for losing herself behind her subject. They wanted celebrity writers. They wanted Tom Clancy.

So she did what any severely anti-social, alcoholic, out-of-work 51-year-old queer writer with an ailing elderly cat might do: She started forging letters by famous literary figures.

The most upsetting part of Lee’s forgeries is how well they do. The one-liners she adds to the ends of original letters are what gets them to sell for big money. Because she really is a talented writer and maybe her wit actually could rival that of the greats. But she’s never known what to do with that talent. It doesn’t help that she doesn’t fit in at dinner parties, refuses to play the industry game, and she doesn’t even try to hide her disdain for pretty much all humans.

If it sounds like Lee Israel isn’t a very likable character, you’re right, she’s not. At least not on paper. And that’s what makes Melissa McCarthy’s performance (along with Marielle Heller’s direction) so awe-inspiring.

McCarthy’s film choices can be hit-or-miss. For every Spy, there are a couple Tammys. But even her best performances have been straight comedy. There’s a lot of humor in Can You Ever Forgive Me? but it’s dark and muted and often incredibly sad. And McCarthy–who is frumped down to the extent that when we first meet her, her hair, coat, and pants are all the exact shade of dingy brown, turning her into an indistinguishable, highly forgettable sepia mass–gives a performance that is so subtle in its range of emotion, it feels like a privilege to witness.

While Lee might be a totally off-putting curmudgeon, her vulnerability comes through in nearly every shot. McCarthy plays Lee as an open wound of loneliness. Yes, she does genuinely prefer the company of cats over any human, and she does struggle to move forward in her career. But it’s clear that she’s also self-sabotaging, rejecting others before they can reject her.

Throughout the movie, we get a few moments of Lee’s defenses weakening, most adorably when she fumbles her way through a date with a flirtatious bookshop owner. But the only character who really manages to break through is Richard E. Grant’s Jack Hock, mostly because he doesn’t care that she shows zero interest in being his friend.

Jack, who is in many ways delightfully reminiscent of Grant’s brilliant performance in the classic Withnail & I, is basically the exact opposite of Lee. He’s as broken as she is, but he’s gregarious, thriving on social interactions. And while Lee might find him exhausting, and their friendship might not make the most sense to outsiders, their rapport is a joy, and their bond is beautifully, darkly complex. When Lee’s scam inevitably comes crashing down, the risk of losing that friendship feels far more devastating than any amount of jail time.

Can You Ever Forgive Me? works, largely, because director Marielle Heller (The Diary of a Teenage Girl) and screenwriter Nicole Holofcener (Enough Said) approach this totally unlikeable character from a place of unconditional love and understanding. It doesn’t try to excuse Lee’s crimes or her treatment of other people, but it does treat her and her deep loneliness with nothing but empathy.

Can You Ever Forgive Me? opens in wide release today, November 2nd, and if it’s playing near you, do yourself a favor and see it.