Review: Bradley Cooper is The Elephant Man in Broadway Revival

And now I am emotionally compromised. 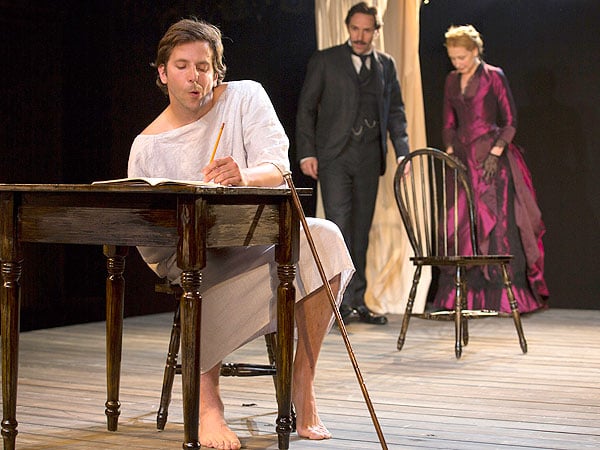 Previews for The Elephant Man have begun. After thirty-three years, the Tony Award-winning play has returned to the Booth Theatre, where the original Broadway production was staged. It is back — and words can’t begin to describe how wonderful it is.

Truth be told, I had planned to open this review with a tongue-in-cheek parody of highbrow theater criticism and then go on to divulge my opinion. But, now, having seen the play and then made my way back to Penn Station in a pensive fog, I’m not so sure tongue-in-cheek is the tone this play deserves.

There’s a reason, other than nostalgia, that The Elephant Man is being performed at the Booth: it’s a small theater. The limited space creates a sense of intimacy between the audience and the actors that the play needs to be most affecting. This is a very intimate play, comprised of small moments between characters that ache with understated poignancy: Dr. Treves cradles Merrick at the train station as Merrick begs for help; Merrick and Mrs. Kendal slowly bond over Romeo and Juliet; Dr. Treves collapses in tears into the arms of Bishop How as he realizes the futility and hypocrisy of his life’s work.

But, of course, I can only get so far into this review before addressing that, yes, John Merrick aka The Elephant Man is played by Bradley Cooper. The irony is self-evident and all the clever remarks have already been made: 2011’s Sexiest Man Alive is playing the single most severely deformed public figure in history. There is no shortage of appropriate reaction gifs. 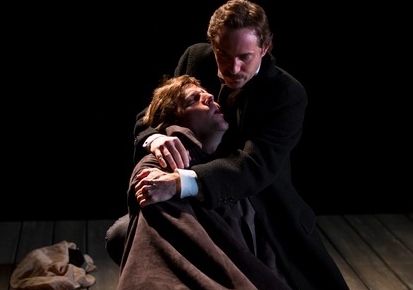 It would be so very tempting, therefore, to write this off as a vanity project or stunt casting were it not for one teeny-tiny enormous detail: Bradley Cooper is astonishing as John Merrick.

The playwright, Bernard Pomerance, forbade the use of prosthetics in The Elephant Man’s introductory notes, insisting that it would be “not only counterproductive, but the more remarkably successful, the more distracting from the play.” So, it’s always been the actor’s responsibility to reproduce Merrick’s deformities with his physicality alone.

Merrick first appears on stage facing the audience in a neutral stance — looking like Bradley Cooper — while Treves, played by Alessandro Nivola, gives a lecture on Merrick’s anatomy, referencing projected photographs of the real-life Joseph Carey Merrick. As Treves describes each disfigurement, Cooper contorts his face, shoulders, arms, hands, back and legs accordingly to approximate Merrick’s appearance. It’s a beautiful transformation (or… you know what I mean), and a clever tactic to earn the audience’s suspension of disbelief. “Listen,” the scene says, “the man on the stage clearly doesn’t have Proteus Syndrome. If you want to enjoy this play, you have to go along with it.” And we do — because Cooper makes it so easy. From his first bestial grunts offstage, through his many monologues delivered in an impeccable (albeit jarringly high-pitched) English accent, to (spoiler) , Merrick remains the most compelling figure on the stage.

This is not to detract from the other actors, of course. Nivola is riveting as the well-intentioned yet sanctimonious doctor that takes Merrick in ,and his aforementioned breakdown almost, almost steals the show. And Patricia Clarkson is charming and poignant as Mrs. Kendal, with whom Merrick engages in a “beautiful, chaste love affair.” The cast is top-notch, and I do feel bad giving the best-known actor the most attention; but Cooper deserves the recognition, as his role is inherently the most challenging, and therefore his performance the most remarkable.

For longtime theatergoers and newbies alike, I can’t recommend The Elephant Man enough. It’s just a shame the play runs for only 14 weeks. Though, after seeing Cooper maintain this posture for 115 minutes, I can understand why.

(photos via T. Charles Erickson, from the Williamstown Theatre Festival’s production in 2012, featuring the same cast and crew — including interns — as the current Broadway production.)