Credit where credit’s due: they made me feel sorry for Ronan the Accuser. 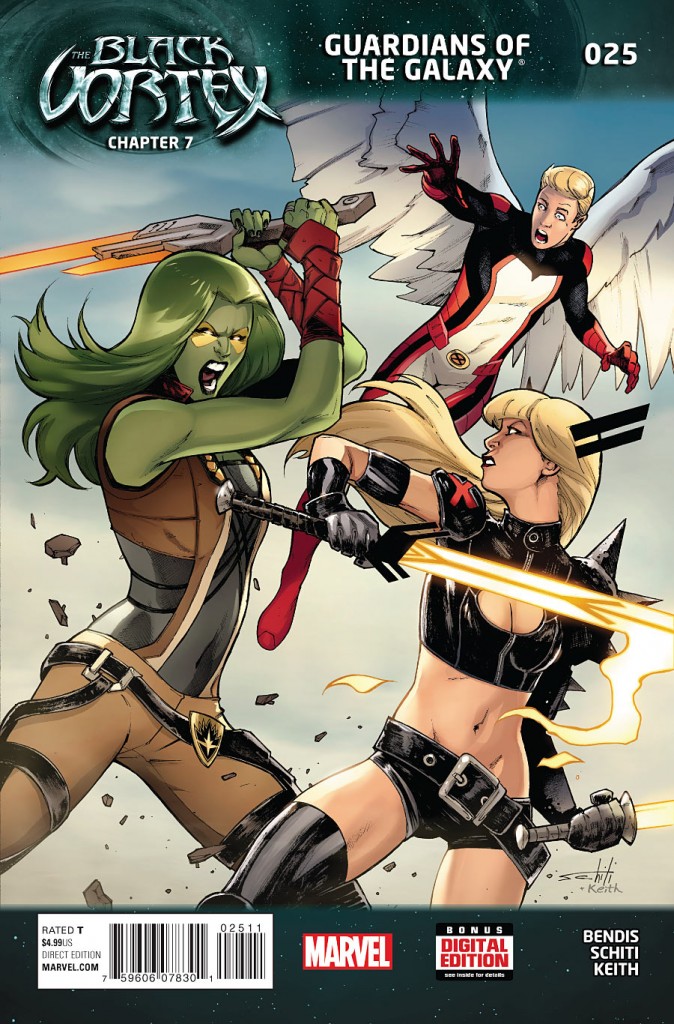 Catch the first part of our Black Vortex review here.

So, remember in my last review how I called The Black Vortex event “refreshing,” “engrossing” and “engaging?” Yeah… I take that back now.

By no means are chapters 5-9 uneventful, of course, but they lack focus and therefore tension. The Slaughter Lords are stirring up trouble on the Spartax Moon, Ma Savage’s orphanage on Spartax is sending out a distress call, and Gamora, Angel and Beast are still wreaking havoc. So, our heroes break into three groups to confront each conflict, none of which I find all that enthralling. Granted, Beast does realize that, in bringing the five original members of the X-Men to the present, he broke the fabric of space-time, which I suspect might factor into Secret Wars, but it’s unlikely to play a large role here. The bulk of the story, therefore, is action-packed but consequence free… right up until Mr. Knife blows up Hala.

Kudos for unpredictability, I guess. I legitimately didn’t see it coming. But then, that’s sort of a problem too. The destruction of the Kree home world really warrants more build up than it gets. And, perhaps worst of all, it isn’t even destroyed by the Black Vortex, but by Mr. Knife’s firepower, which calls into question just how necessary the Black Vortex is. So far it’s played a peripheral role in Mr. Knife’s maniacal plan, which, by the way, turns out to be – wait for it – the construction of an empire!

Mwa ha ha… ha… ugh, that it? Yes, he’s struck a business deal with the Brood in which he gets one planet out of every ten they conquer, starting with Spartax, which requires encasing its denizens in ice amber. It’s only at this point that the Black Vortex is actually needed because, apparently, blowing up an entire planet requires nothing out of the ordinary but covering people in amber? That’s when the big guns come out.

In all fairness, there is some emotional weight brought out through Hala’s destruction, though it’s mostly retrospective. In Guardians Team Up #003, Ronan the Accuser disobeys the Supreme Intelligence and disgraces himself by stealing the Black Vortex and submitting to it, in order to defend Hala against Gamora, Beast and Angel. At the end of the issue, he reflects that he can live with the sacrifice knowing that future generations of Kree will be able to appreciate “the beauty of Hala, the strength of the Accuser Corps, the nobility of the Kree,” because of what he did. Next issue, Hala explodes. Ouch.

That dose of poignancy, however, isn’t enough to make this middle installment of BV much more than a collection of well-drawn fight scenes with lots of dialogue.  The remaining four issues in this event might manage to turn things around but I’m not optimistic. I’ll save my emotional investment for a story with legitimate stakes and intriguing and long lasting consequences for Secret Wars, thank you very much.