Good acting, a clever concept, and great directing saves this movie from sinking.

I’ll be honest, Black Sea was a movie I was pretty interested checking out. See, if I have one fear in the world that cab bring on horrific panic attacks, it’s being trapped in deep water. Don’t get me wrong, I love swimming, but the minute someone told me during a scuba diving lesson about equalizing pressure, I knew I should not be doing this. Once I looked up and saw how much water there was between me and the all-important air, I started hyperventilating (not good with an oxygen tank on your back). Sure, unfortunate though this may have been for my scuba diving career, it’s great for when it comes to appreciating a good submarine movie.

Given all that, the minute I heard Irish actor Michael Smiley say, “Out there lies a dark, cold death,” I felt pretty good about Black Sea. Though it’s a little absurd, I still had a great time watching it without feeling like my brain was being assaulted with stupidity. More impressive than that are the heavier themes of guilt, masculinity, and prejudice which run throughout the film, deftly handled by director Kevin MacDonald, making his first of what will hopefully be several action movies.

The concept of the film is rather simple: a man who has spent his life working as a submarine captain is let go from his company and is left with nothing. There are aspects of Black Sea which remind me of The Full Monty, specifically Jude Law’s characters’ complete lack of worth without his career, a man who now regrets losing his wife and child to the job and her second husband. Then there’s the rag-tag team of veteran seamen who are similarly displaced in this new world that doesn’t seem to need them anymore; decades spent in the depths of the deep water doesn’t lead to many solid second careers.

Jude Law plays Captain Robinson, and, despite having some initial trepidations that he may have been miscast, I came to respect Law’s approach to the captain. Law strikes me as an odd choice for the gritty Scotsman (he does struggle a bit with the accent), but his lack of complete brute is what ultimately makes him the right choice for the character. He is trapped in a submarine with old blokes, and he seems slightly smarter than his crew – and he certainly has that opinion of himself. Fortunately, that ego proves very necessary to the character and the film’s overall narrative. 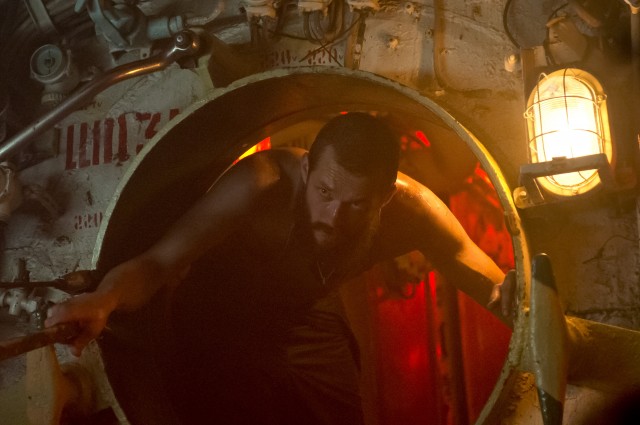 Robinson’s plans are simple. After getting fired, he hears there is a Nazi submarine which sunk during WWII and is full of Russian gold. With no money, Law must find a private investor to pay for a submarine and for a crew to recover the gold. They’ll split what they recover, with Law demanding that his take be split evenly among his old crew of displaced submariners and divers. That’s when things get rough; you see, not everyone involved with the heist thinks things should be split so evenly, especially since the crew is comprised of Russian, Scottish, Irish, Australian, and American men. The generic Russians seem oddly out-of-place at first, which is exactly how the English-speak crew see them – which ultimately ends up being an important plot point, and works in the film’s favor.

The troublemaker is diver Fraser (Ben Mendelsohn), who is identified immediately by Law as a potential liability to have on board. He hates Russians, and starts getting the crew to side against each other, causing Robinson to lose his temper during a fight. These two characters essentially cause the gradual disintegration of the crew, which could lead to far more problems than just a unsuccessful mission. Having seen the trailer and knowing this was the film’s premise,  I was delighted to learn this wasn’t the entire plot, as I was anticipating. Black Sea’s story is far more complicated and interesting – and because of that, I will offer no more details.

What I will say, however, is how much I liked this movie. I wish Black Sea had come out during the Christmas holiday because, if there’s one thing we share, it’s the opinion that there’s nothing more satisfying than a good heist film. What are the qualifications for that, you might ask? Well, I’ve determined that there are four rules:

Black Sea hits all four of these marks (especially the fourth), and is ultimately a thoughtful, well-made heist/adventure/disaster film. 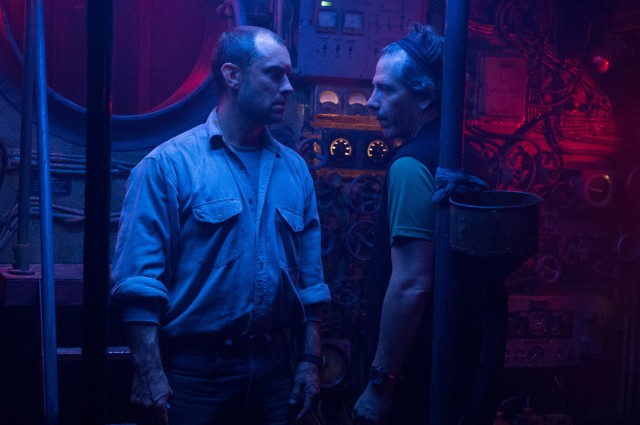 Director Kevin MacDonald is blessed with a really good cast of memorable, working-class character actors, which now seems to include Jude Law, who has out grown of his golden boy image to be a bit rough and tough on-screen. Familiar Irish actor Michael Smiley is his usual welcome presence, and Konstantin Khabensky is great in an all-too-brief role as Robinson’s second-in-command. But the four actors who really dominate the movie are Law, Grigoriy Dobrygin, Scoot McNairy, and Ben Mendelsohn; all wonderfully specific, enjoyable actors to watch. Russian actor Dobrygin (A Most Wanted Man) is wonderfully heroic as the translator, and proves his range with these two very different leading roles. Mendelsohn long ago proved he plays a great psycho, and he’s so charismatic and committed that he manages to anchor a pretty broad character. And his Killing Them Softly co-star McNairy is perfectly hateful as a slithery weasel forced to join the mission by his investor boss.

The only problem with Black Sea is that the pacing seems rushed. We don’t get much time to enjoy seeing the characters at work on the submarine, or to establish the decades-old relationships many of these men seem to have shared. Part of me feels that these scenes were cut to make sure the movie didn’t go beyond its two-hour running time, and usually, I find movies need more cutting; but that isn’t a hard and fast rule, and some movies move so quickly they can actually add a few more minutes to establish character without feeling long. The movie feels especially rushed when the crew first arrives on the submarine, as well as towards the end when things get a bit confusing.

But that one issue, along with a few CG shots which seem a bit “off.” are nothing compared to the delight I experienced while watching the movie. Most of the CG, obscured a bit on-screen, works well in placing the submarine in the ocean. The movie looks great, especially the shots in the sub, creating a creepy sense of claustrophobia, and makes the long, narrow setting a clear obstacle the crew has to overcome. The most thrilling scene (for me at least) is the diving, which – considering how slow the characters can actually move, and how difficult it is to see in the murky water –  is a significant accomplishment. Lately, we’ve had a lot of action movies which are slick and pretty, with beautiful, smart people on screen, and I like a lot of those movies. But there is something equally refreshing about seeing gritty, dirty action movies without any romantic subplot – just watching a bunch of craggy, brutish guys destroy each other with their unchecked machismo. Sure, this movie is preposterous and doesn’t transcend its old-fashioned genre roots, but it’s a really fun, intelligent, thrill ride.