Review: Black Mask Studios’ Calexit Is a Must Read Political Dystopia with a Twist of Hope 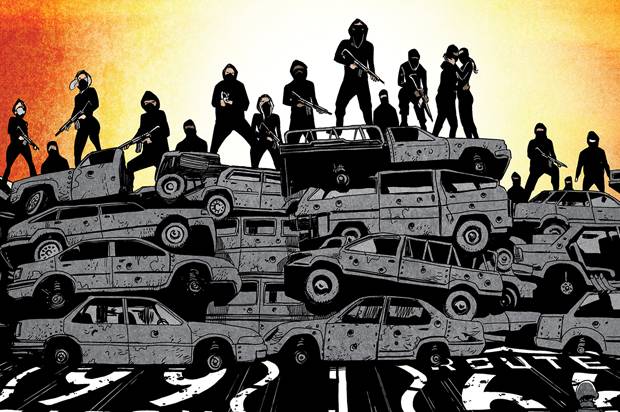 Well, here we are. It’s 2017, and it increasingly feels like we are living in some sort of political satire run wild. But every day, we’re reminded that this is our stone cold reality.

In the days following the 2016 presidential election, there were a lot of things being said about what had happened, where our country would go, and what those of us who wanted to resist could do. In the midst of that, one of the things that was sometimes said was, “Wait and see what art, comedy, or writing comes out of this.”

Which is why, in 2017, Black Mask Studios delivers a brilliant piece of political dystopian fiction: Calexit. In Calexit, writer Matteo Pizzolo and artist Amancay Nahuelpan imagine a future where, following the election of a fascist leader, California has seceded from the United States. California’s map is now made up of alliance cities and areas under an armed occupation by the U.S. National Guard. The president’s resemblance to #45 isn’t subtle, nor is the hate speech he spills out in the first few pages:

“I’m not gonna let murderers and illegals hold you down. Those tent villages growing from the coastline to the desert, they’re like a cancer. A cancer full of terrorists. Well, I’m coming and we’re gonna shovel them all up and lock em in a dumpster so tight you won’t even believe it.”

But Calexit #1 isn’t here to tell the story of corrupt elected officials; its focus is on members of the resistance. Issue one follows the paths of Zora, a resistance leader pursued by the government, and Jamil, a local smuggler (or as he prefers to be called, a “courier”). In occupied Los Angeles, they encounter National Guard officers with “Homeland” stamped across their chests, members of the resistance, and those willing to shelter resistance members like Zora, often with devastating consequences.

It’s quickly revealed that the inciting incident for the divide was an executive order which called for the immediate deportation of all immigrant civilians not recognized as U.S. citizens. The parallels to our own current reality is where the real uneasiness of Calexit lives. It’s just askew enough to feel unreal, but not so far off that it doesn’t leave you with a slight worry in the back of your head. After all, there actually has been a real Calexit movement trying to gain steam for years. However, in his editorial in the back pages, Pizzolo points out that California isn’t quite as consistently blue as people might think:

“But, from my point of view, any secession would likely lead to a civil war within California before the US military could even get their boots on. Lots of people think about California strictly in terms of the (generally liberal) metropolitan cities, but that’s a geographically tiny portion of the state. Political views get more complicated as you leave those major cities and head into the parts of the state with all the water and pipelines and agriculture that the cities rely on. Add immigration into the mix? Powderkeg. Political passion/rage is as bipartisan in California as it is in the rest of the country.”

It’s clear that Pizzolo is pulling a lot of smaller details from real life, such as mentioning that retail chains are boycotting the first daughter’s clothing line. Throughout, the dialogue is made up of statements that many of us have probably said in recent months. Listening to the news, Zora’s father says, “I’m turning this off, it’s too depressing,” to which her mother replies, “We need to keep up with the news, depressing or not.”

For all that though, Calexit doesn’t feel like a depressing, inescapable horror; instead, it feels like a reality that has forced citizens to resist, to fight. Unlike watching the news, Calexit doesn’t leave you feeling weighed down—in fact, it’s just the opposite.

Dystopian fiction has seen a rise this year, with the popularity of shows like The Handmaid’s Tale, and classic books like 1984 shooting back to the top of the best seller lists. But Pizzolo has added an innovative spin within the Calexit series. In the back of each issue, there are interviews with grassroots leaders and activists, who discuss social justice, politics, and ways people can mobilize for change. Complete transcripts of the interviews are also available online.

No matter what we wish, the next few years aren’t going anywhere. In the meantime, we have work to do, and political art like Calexit can only help to energize us and inspire us to challenge the current regime.