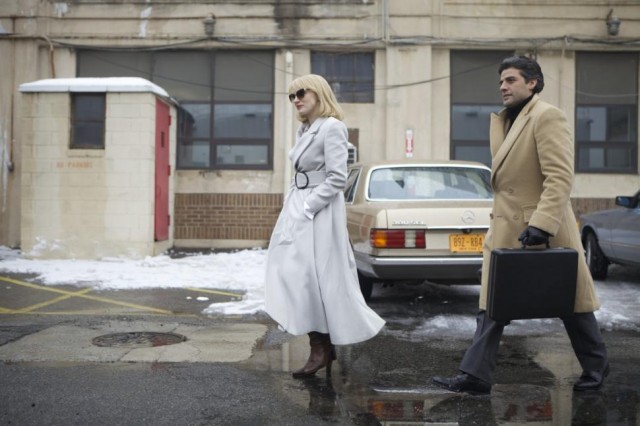 There is a scene in A Most Violent Year which could arguably the defining moment that finally wins Jessica Chastain her Oscar. Chastain’s Anna drops her Princess act, and gives district attorney Lawrence (David Oyelowo) a warped lesson on respect after her daughter’s birthday party. She turns into a woman straight out of Goodfellas, the kind of woman no one (including her husband) wants to mess with.

Despite being one of the year’s best films (and a genuine surprise), I can’t overstate the fact that Jessica Chastain isn’t just the best part of the film, but that this is arguably her best performance to date. So often portrayed as ethereal and courageous but fragile women, Chastain here is like you’ve never see her before. Always tough, always pragmatic, and more than willing to put people in their place, her icy cold performance is a wonder to behold. And she is at her very best when she does the tough-lady role in her silk and cashmere, using her long, manicured fingers like claws. As wife Anna she is a fascinating character who makes what could ultimately have been a side story into an equally interesting domestic drama.

The problem – the only problem – with A Most Violent Year is that the fascinating domestic story never fully comes together with the political/economic satire, ultimately making the fascinating domestic stories unimportant to the film’s primary plot. It’s a minor complaint, but a bit more effort to weave Anna into the dominant story would have made the entire film work a bit better, because Chastain really does command the film. 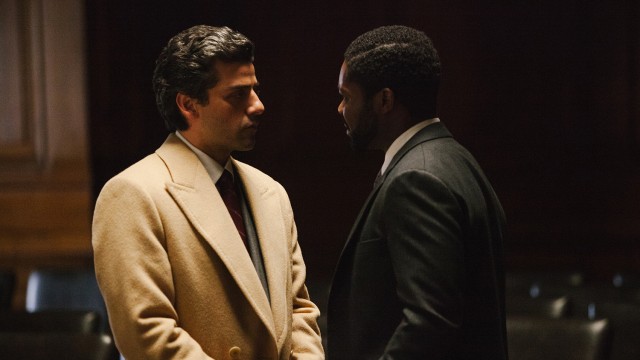 The story of A Most Violent Year is that of Oscar Isaac’s Abel, now the owner of Anna’s father’s home heating Gas Company, which is on the verge of both greatness and destruction. His company is by far one of the smallest gas companies, which is the reason he describes his company as “white glove services” (a scene which includes a hilarious bit of showmanship from Isaac). Despite its size, his company is doing well, and finally competing with the big boys – big boys who feel threatened enough to attack drivers on the streets in order to destroy the company. Drivers are so terrified they are unwilling to work for the company without weapons to defend themselves. Abel also wants his own storage area near the docks, but that business deal depletes all his financial holdings at a time when he is under investigation by Lawrence, the DA.

Along with Chastain, Isaac, Oyelowo, and almost unrecognizable Albert Brooks are all superior in this slow and patient thriller. Isaac’s Abel is like a ’70s anti-hero as a hard-to-root-against man who is probably also guilty of criminal activities. He just defends his underdog position so well, claiming to be targeted by Oyelowo not because he’s the most guilty of the gas companies, but because he’s the one person Oyelowo could probably bring to court without having to face bigger powerhouse lawyers. Despite being the one honorable man in the film, Oyelowo (who is having a great year with two brilliant and very different roles in this and Selma) is a man whose intentions and desires are appropriately open to interpretation, making sure audiences remain invested in the plight of Abel and wife Anna.

Anna works with the company, and is essentially the reason immigrant Abel has the company, inheriting the business like a dowry – something Anna is well aware of and happy to hold over his head. She works in the business, often manipulating it in their favor in ways Abel would be unable and unwilling to do. She is the pragmatic, ruthless one who wants to be a part of the big boys’ club, and knows her “place” in 1980’s business. She isn’t just the woman on the arm of the man, but manipulates the situations while her husband takes the credit. She accepts and goes along with these established rules, but is also resentful of them, especially when she sees her husband making mistakes which could risk “her family’s” business. Isaac and Chastain’s scenes together are some of the best of the year, especially a fight halfway through the film when they cruelly attack each other verbally. 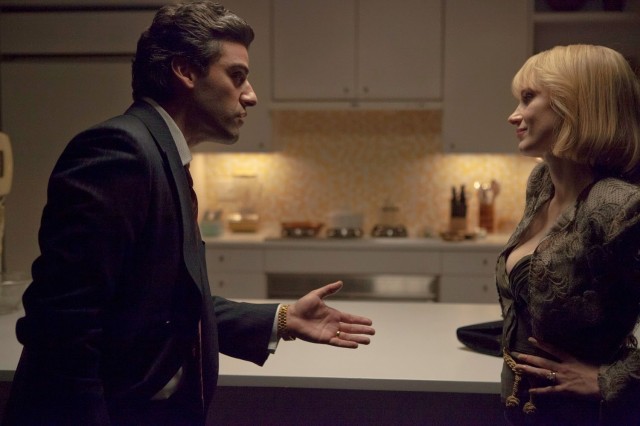 In this, J.C. Chandor’s third film, he returns to political/economic allegories, but avoids all the missteps he made with Margin Call, a movie I liked but I thought desperately needed some subtly and character development. After making a pure character/atmospheric film with All is Lost, he brings the lessons he learned with that film to the writing and cinematography of this film. The movie has a ghostly, otherworldly look, which immediately lets you know this is both a period piece and a parable. Long, bleak shots of suburbs and highways turn into something more dangerous than they would seem. And once again, Chandor’s understanding of sound design that he showed with All is Lost, especially that less can be more, makes the film a tense watch. At times you feel you should hear more score to hint at situations, simply because we have been trained to watch movies that are over-scored.

So what of the allegory? The movie reminds me of Andrew Dominick’s complicated, engaging but ultimately disappointing Killing Them Softly; but while that film ended with the bluntest commentary on American politics, this film leaves things unspoken. The role oil and our need for it plays in every level of government; why we have (and may always have) wars and violence because of it; and that some companies are just too big to face consequences, while others doing the same or less will be brought down to “set an example.” But the allegory isn’t just political; it has a surprising connection to the violence we see on the streets, why turning your back to “small crimes” only causes things to escalate when people feel the need to defend themselves. The fact A Most Violent Year can have those timely connections now is why saying less and showing more about “what your movie means” can be so valuable for a film of this kind.