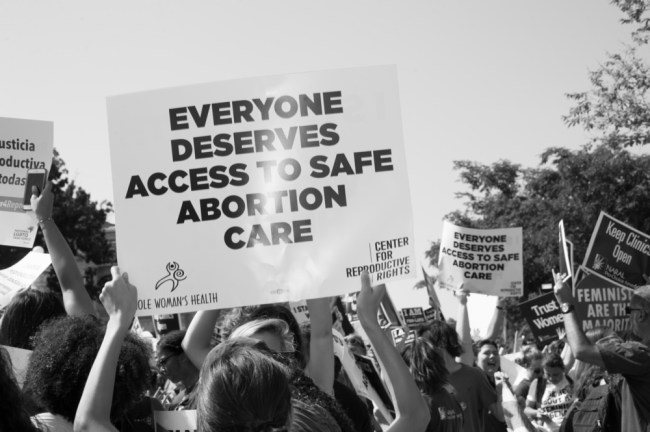 It’s no secret that the holiday season—aka being forced to listen to your uncle prattle on and on about swamp drainage and the second amendment—is a particularly difficult time in the Trump era.

Kayla Moore, wife of alleged child molester and U.S. senate candidate Roy Moore, certainly took on the role of that one conservative aunt we’re all forced to deal with by inventing the term “full-term abortion”—a bizarre dump of word vomit meant to inaccurately suggest women have abortions right at the tail-end of their pregnancies. Moore made up this assertion last week.

But thankfully, this week brought some good tidings for reproductive justice, from widened access to affordable birth control to a hugely important victory for abortion rights in the state of Texas. So, there’s that.

On Wednesday, a judge from the U.S. 5th Circuit Court of Appeals ruled a ban on the dilation and evacuation abortion procedure in the state of Texas unconstitutional for imposing an “undue burden” on women seeking second-trimester abortions. The dilation and evacuation procedure is the safest form of late-term abortion, and is relied on by women whose access to abortion is delayed by some of the many unnecessary restrictions in Texas, or by women faced with extreme health circumstances.

“The court concludes that requiring a woman to undergo an unwanted, risky, invasive, and experimental procedure in exchange for exercising her right to choose an abortion, substantially burdens that right,” the judge wrote in the opinion.

In other words, the alternatives to dilation and evacuation can endanger women’s health, while traveling out of state to have the procedure places a significant burden on the woman. And after all, taking away the only safe option for late-term abortion isn’t going to take away the need and demand for late-term abortion.

The judge added: “The State’s valid interest in promoting respect for the life of the unborn, although legitimate, is not sufficient to justify such a substantial obstacle to the constitutionally protected right of a woman to terminate a pregnancy before fetal viability.”

I’m sure we can all share in a collective eye roll over the suggestion that abortion bans are rooted in “respect for the life of the unborn” and not outright, reckless disdain for women’s bodily autonomy, but at the very least the judge ruled in Texas women’s favor.

Fire in Southern California abortion clinic is being investigated

Early Wednesday morning, a fire broke out at a Family Planning Associates Medical Group clinic in Riverside County, CA, which offered abortions and a range of other family planning services. The Riverside County Fire Department is investigating the incident which involved a broken window, leading some to suggest that a device starting the fire had been thrown in from the window.

Violence and threats of violence—particularly on the internet—toward abortion clinics and providers have been on the rise since the release of a fabricated 2015 video taken at a Planned Parenthood clinic made it appear as if the women’s health organization “sold baby parts,” galvanizing anti-abortion extremists to take action. Of course, that one video can’t take all the credit for—rhetoric from anti-choice politicians (i.e. Donald Trump suggesting babies are being “ripped out of the womb in the ninth month”) equates abortion to the literal murder of a child, so it’s no surprise extremists are increasingly being moved to respond to what they’re told is violence with more violence.

As the Riverside County Fire Department carries out its investigation of what happened, just keep in mind that violence and vandalism at abortion clinics—especially in political climates like this—are rarely accidental.

Massachusetts women will have access to free birth control

This week, Massachusetts Gov. Charlie Baker—who is, oddly enough, a Republican—signed off on legislation to guarantee free birth control, regardless of changes in federal policy. The law, which will go into effect immediately, seemed to be a response to the Trump administration’s reversal on the Obama-era contraceptive mandate—which would allow employers to take away coverage of birth control for any reason, be that religion or plain sexism—last month. It’s an example of how states can respond to harmful federal policies with common sense policy making of their own.

It’s important to recognize how remarkably disappointing it is that we’re now living in a country where so many of women’s rights are contingent on which region or state they live in, that access to the most basic resources for making decisions about their bodies, careers, relationships, and so on and so forth is no longer a guaranteed right for all American women. This new law in Massachusetts is just a reminder that in the Trump era, all we can really do is fight back in any way we can.