#Pride: What Representation in Kids’ Media Means to a Queer Parent 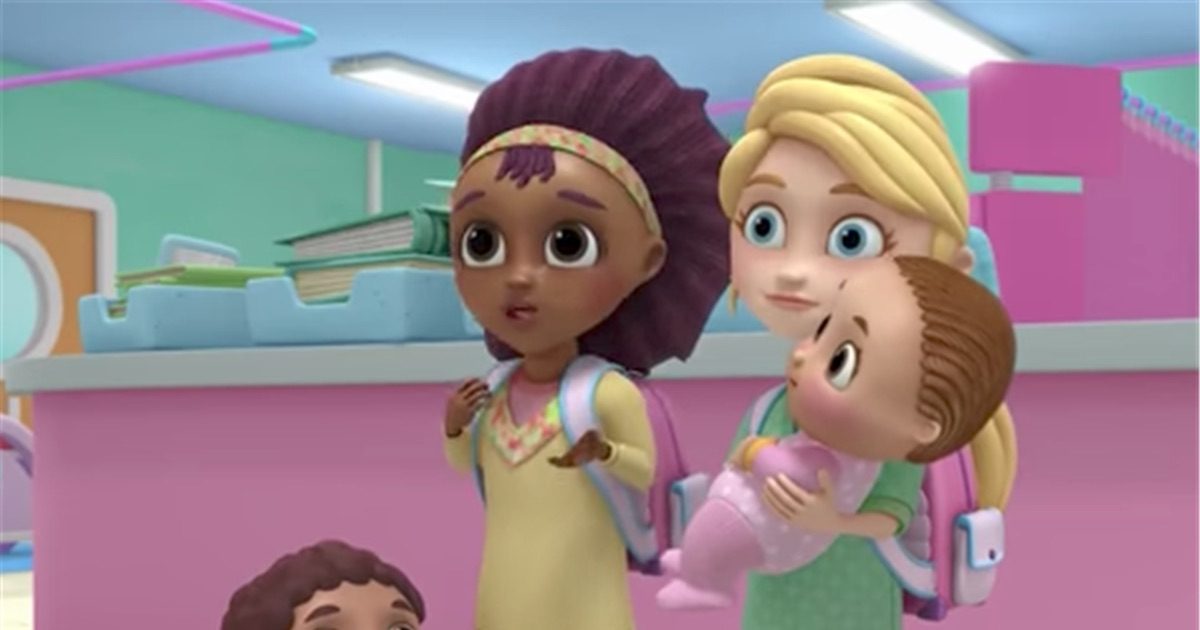 There are a lot of really fun things you have to deal with as the parent of a toddler: cleaning marker off the wall; telling you child they cannot ride the dog; cleaning pee off the carpet; convincing the kid that yes, they have to wear pants; cleaning up a hundred tiny toy pieces in a never-ending, Sisyphean attempt to keep you house from looking like a bomb went off; just … a lot of cleaning. But another thing we have to endure is children’s entertainment, often on a constant loop.

Sometimes, if you’re lucky, the kid’s media choices will be great (I’ve watched Coco ten times already, and I still love every second), sometimes they’re terrible (Caillou can go burn in the fiery pit from whence he came), and sometimes, you wish there were a movie out there, that you could show your child, about you. Unfortunately, when you’re queer parent, that’s almost impossible.

I have a three-year-old daughter, and she loves Peppa Pig, Ryan’s Toy Review, and most of all, Disney. Now, I don’t mind that she loves to watch movies. In fact, I love it because it means she’s quiet for a few minutes, and I can get back to that endless tidying or, if a miracle occurs, get some work done. And I don’t mind at all that she’s super into Disney right now; I love what heroines like Moana and Ariel can teach her about being curious, kind and brave.

Right now, we’re in week five of her Mulan phase. Her favorite part is when the Huns attack in the mountains, which she calls “bad guys in the snow,” but one of the things I love most about Mulan is that it is set in and about China. You see, my wife is Chinese. Mulan is the first “princess” my daughter gets to see that looks like her other mommy, and that means something. I want my kid to not just see herself onscreen in Rapunzel and Elsa; I want her to see her family. Sadly, when it comes to a couple, on the screen, even remotely like her own parents, that doesn’t exist. 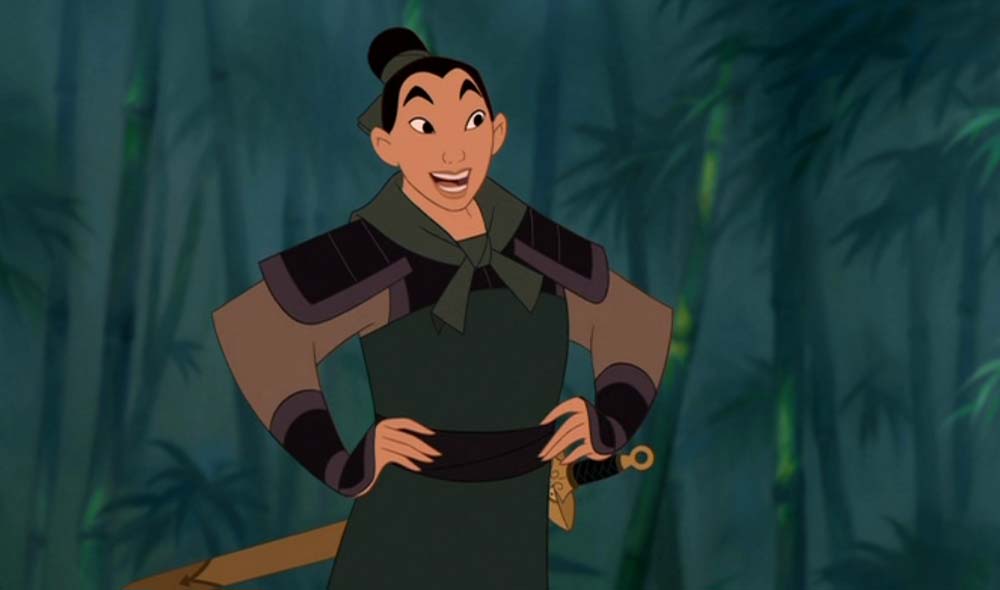 I’ve tried, as much as I can, to avoid the more romantic movies for the little one, and that’s pretty easy nowadays, when the best kids’ movies have little or no focus on romance. Moana, Zootopia, and Coco are staples in our house, and they tell important stories about identity, prejudice, and family, but the romantic in me still loves … well, love. I do believe that love is important—that it can save the day and change the world. I love Frozen (not as much as my daughter, but I don’t think anyone can) because it tells us that true love doesn’t have to be romantic to be powerful.

But I really would like to see a story where the love that saves the day is romantic and between two people of the same sex. In the same way, I love pointing at Mulan to say, “Look, she’s like Mommy; she’s strong and brave, too!” I want to see two people in love onscreen and tell my kid, “Look, it’s a family like ours.” Yes, there are lots of loving parents in kids’ movies, and thankfully, in recent years, both of them are often alive, but none of them are gay. No princess loves another princess; no prince loves another prince.

Children are amazing. They don’t know what’s “normal” or wrong until you tell them. Accepting people for who they are is something we have to teach, and the very smallest humans might not understand the moral of a story tied up with a bow, but they understand what they see. My daughter knows girls who read are cool and awesome because Belle does that. She knows same-sex parents and marriages are just as loving and supportive as opposite-sex partnerships, because that’s what she lives. One day, someone is going to come along and tell her the opposite of what she’s learned. If they tell her being a nerd is bad, she can look at Belle and tell them they’re wrong, but where’s her ammunition for when they tell her that her family isn’t normal? It’s not on the big screen, and that breaks my heart.

Now comes the part where people claim that “forcing sexuality on children” is wrong, and that gay content should equal adult content. As I’m sure you know, that’s a ridiculous double standard. Children’s media, as I’ve said, is full of straight love stories. Love is love, and it should be shown and celebrated in all its variation. The pearl-clutchers fear this kind of content will normalize gay relationships, and they are exactly right. That’s what I want—for my life and family to be shown as normal and good, for my family and the millions of families like ours.

I know there are lots of queer stories out there—not enough, but more every day. That’s amazing. It’s fantastic that teens and adults can look at anyone from Alec Lightwood to Rosa Diaz to Nicole Haught to see strong, queer characters living and thriving, but teens are a long way from toddlerhood. There are a few children’s books out there with gay characters—I did tear up reading my daughter A Day in the Life of Marlon Bundo—and once in a blue moon, we’ll see incidental queer characters on television, like a pair of lesbian moms on Doc McStuffins (pictured at the top).

But any parent can tell you that there’s nothing more powerful in a kid’s imagination than a Disney hero. I can co-opt these heroines, tell my kid bedtime stories where Mulan and Elsa meet and get married, but it’s not quite the same as seeing it onscreen—as knowing that it’s something other people have seen, supported, and understood. Children’s movies, especially Disney and Pixar, teach us that it’s okay to be a little different, that your family will love you know matter who you are, and about the need to stand up for what’s right, even if we’re scared. Those are important message for queer kids and kids of queer parents, and it would mean so much to see them related by an actual queer protagonist. 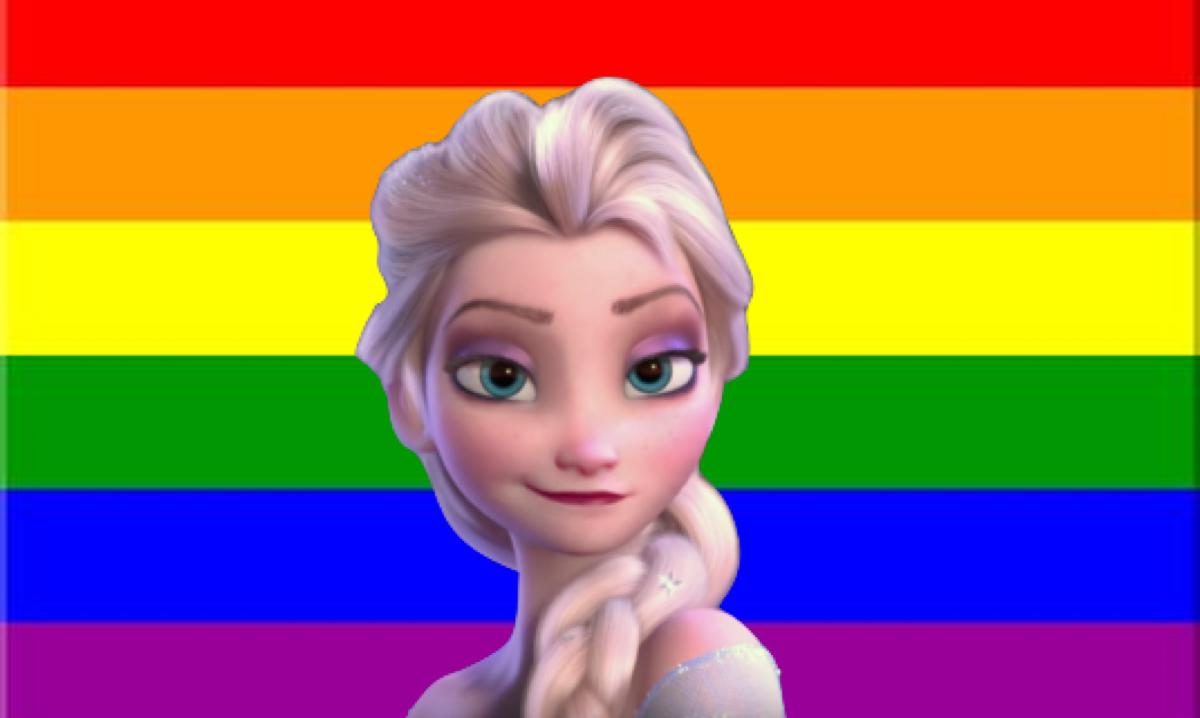 Yes, I know Disney and other studios rely on the excuse of international censorship, but when you are an American brand with so much clout, maybe it’s time to make a statement in support of diversity, equality, and tolerance. And at this point, we know diversity sells here. If Disney gives Elsa a girlfriend in Frozen 2, I can guarantee I won’t be the only one there crying on opening day.

It’s an awesome thing to see yourself in media, or to find a story that relates to your life like nothing before. It’s very special to me to see a love story between two women, because that’s my life. The stories we tell our children, either our own or through the media they consume, shape them. They have the capacity to teach important, powerful lessons. These characters show kids how to be so many good things: curious, brave, kind, and generous. It’s time we add proud to the list.