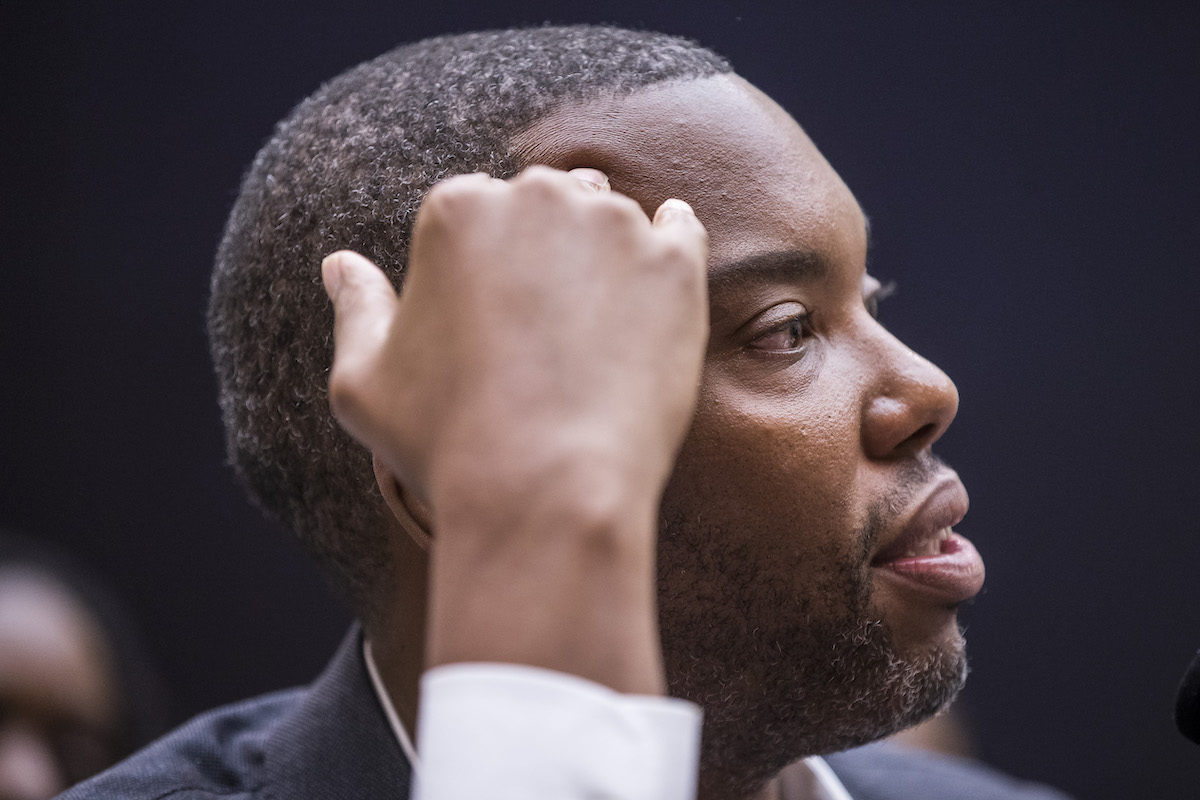 For the first time in 12 years, a House panel held a hearing to discuss the possibility of issuing reparations for slavery. The hearing was called today, on Juneteenth, to discuss H.R. 40, a bill written by Rep. Sheila Jackson Lee from Texas, which calls for a commission “to study and consider a national apology and proposal for reparations for the institution of slavery, its subsequent de jure and de facto racial and economic discrimination against African-Americans, and the impact of these forces on living African-Americans.”

So it’s a bill to study whether or not action needs to be taken regarding reparations and an official historical apology. But according to Mitch McConnell (ugh), even that is too much. Here’s what he said on the issue yesterday:

moments ago, @SenateMajLdr McConnell on #Reparations: “I don’t want reparations for something that happened 150 years ago…we’ve tried to deal with the original sin of slavery by passing civil rights legislation and electing an African American president….”

First of all, this is not the distant problem McConnell and so many others want to believe it is. These are the memories of our generation’s grandparents’ grandparents.

This is my grandmother. Born in Goodwill, Texas 106 years ago. She is very much alive. Her grandfather was born enslaved and was freed on #Juneteenth. She can recall family accounts of slavery. This is recent history. American history. #Reparations pic.twitter.com/9fRnbafzQZ

It’s funny people who fight for Confederate Statues want to acknowledge the monuments of slavery! But not the repercussions of slavery! #Reparations #TeamDl

Second, even if McConnell hadn’t spent eight years trying to strip presidential power from Barack Obama, having a black president does not undo centuries of racism. Even if it did–even if we believed that racism on an individual level was completely eradicated on November 4th, 2008–systemic inequality is so deeply rooted in the foundation of our country that you have to have your head buried all the way in the depths of the sand not to accept that the vestiges of slavery not only still exist, but shape entire lives.

A massive crowd showed up for the hearing today, lining up at 7am to get one of the public seats available. But according to the Guardian, Republican lawmakers were not so interested in being there. “Half the bench of lawmakers consists of Democrats, and their seats are all full. Half the bench consists of Republicans, and their seats are almost entirely empty. Which speaks volumes about how the modern conservative movement views the subject of making amends for slavery,” they write.

Those who were present got to hear Ta-Nehisi Coates destroy Mitch McConnell’s argument in person. McConnell wasn’t there (as this was a House hearing), but Coates, who wrote an iconic Atlantic article on the issue five years ago, began his testimony by addressing the Senator’s comments.

“Enslavement reigned for 250 years on these shores. When it ended, this country could’ve extended its hallowed principles — life, liberty and the pursuit of happiness — to all, regardless of color,” writer Ta-Nehisi Coates told Congress. “But America had other principles in mind” pic.twitter.com/a1RYYhbSnq

“Enslavement reigned for 250 years on these shores. When it ended, this country could have extended its hallowed principles—life, liberty, and the pursuit of happiness—to all, regardless of color. But America had other principles in mind. And so for a century after the Civil War, black people were subjected to a relentless campaign of terror, a campaign that extended well into the lifetime of Majority Leader McConnell,” he said. And definitely watch the video above but in case you can’t, here’s how Coates continued:

It is tempting to divorce this modern campaign of terror, of plunder, from enslavement, but the logic of enslavement, of white supremacy, respects no such borders and the guard of bondage was lustful and begat many heirs. Coup d’états and convict leasing. Vagrancy laws and debt peonage. Redlining and racist G.I. bills. Poll taxes and state-sponsored terrorism. We grant that Mr. McConnell was not alive for Appomattox. But he was alive for the electrocution of George Stinney. He was alive for the blinding of Isaac Woodard. He was alive to witness kleptocracy in his native Alabama and a regime premised on electoral theft. Majority Leader McConnell cited civil-rights legislation yesterday, as well he should, because he was alive to witness the harassment, jailing, and betrayal of those responsible for that legislation by a government sworn to protect them. He was alive for the redlining of Chicago and the looting of black homeowners of some $4 billion. Victims of that plunder are very much alive today. I am sure they’d love a word with the majority leader.

Sure, slavery has ended. But its legacy persists. “It was 150 years ago. And it was right now,” says Coates.

The typical black family in this country has one-tenth the wealth of the typical white family. Black women die in childbirth at four times the rate of white women. And there is, of course, the shame of this land of the free boasting the largest prison population on the planet, of which the descendants of the enslaved make up the largest share. The matter of reparations is one of making amends and direct redress, but it is also a question of citizenship. In H.R. 40, this body has a chance to both make good on its 2009 apology for enslavement, and reject fair-weather patriotism, to say that this nation is both its credits and debits. That if Thomas Jefferson matters, so does Sally Hemings. That if D-Day matters, so does Black Wall Street. That if Valley Forge matters, so does Fort Pillow. Because the question really is not whether we’ll be tied to the somethings of our past, but whether we are courageous enough to be tied to the whole of them.

“If Thomas Jefferson matters, so does Sally Hemings” – Ta-Nehisi Coates at the #HR40 committee meeting on #Reparations. pic.twitter.com/c6lUQToLxl

Coates wasn’t the only person to give testimony today. Here’s Cory Booker:

“Many of the bedrock policies that ushered generations of Americans into the middle class…intentionally designed to exclude Blacks.” – @CoryBooker #HR40 #Reparations #CivilRights pic.twitter.com/c9JWmA6Yqh

You’ve likely not had many opportunities to hear Dr. Malveaux speak before today. If that’s the case, make sure you give that video a watch. It’s incredibly powerful and informative.

“When zip code determines what kind of school you go to.

When zip code determines what kind of food you can eat.

These are the vestiges of enslavement that people don’t want to deal with.” – Dr. Julianne Malveaux #Reparations pic.twitter.com/QgkieX5aXN

Obviously, reparations are an extremely complicated issue. There’s a debate over whether individual checks or investments in things like criminal justice reform and HBCUs would be more beneficial respectful. There’s the question of figuring out who gets how much. All of those questions, though, only serve as evidence for the need for this kind of study.

We are debating — on Capitol Hill — whether to STUDY history, whether to build our institutions with History in mind. Debating the merits of HISTORY. So dangerous is black knowledge, black experience. So far is the reach of racism. #Reparations