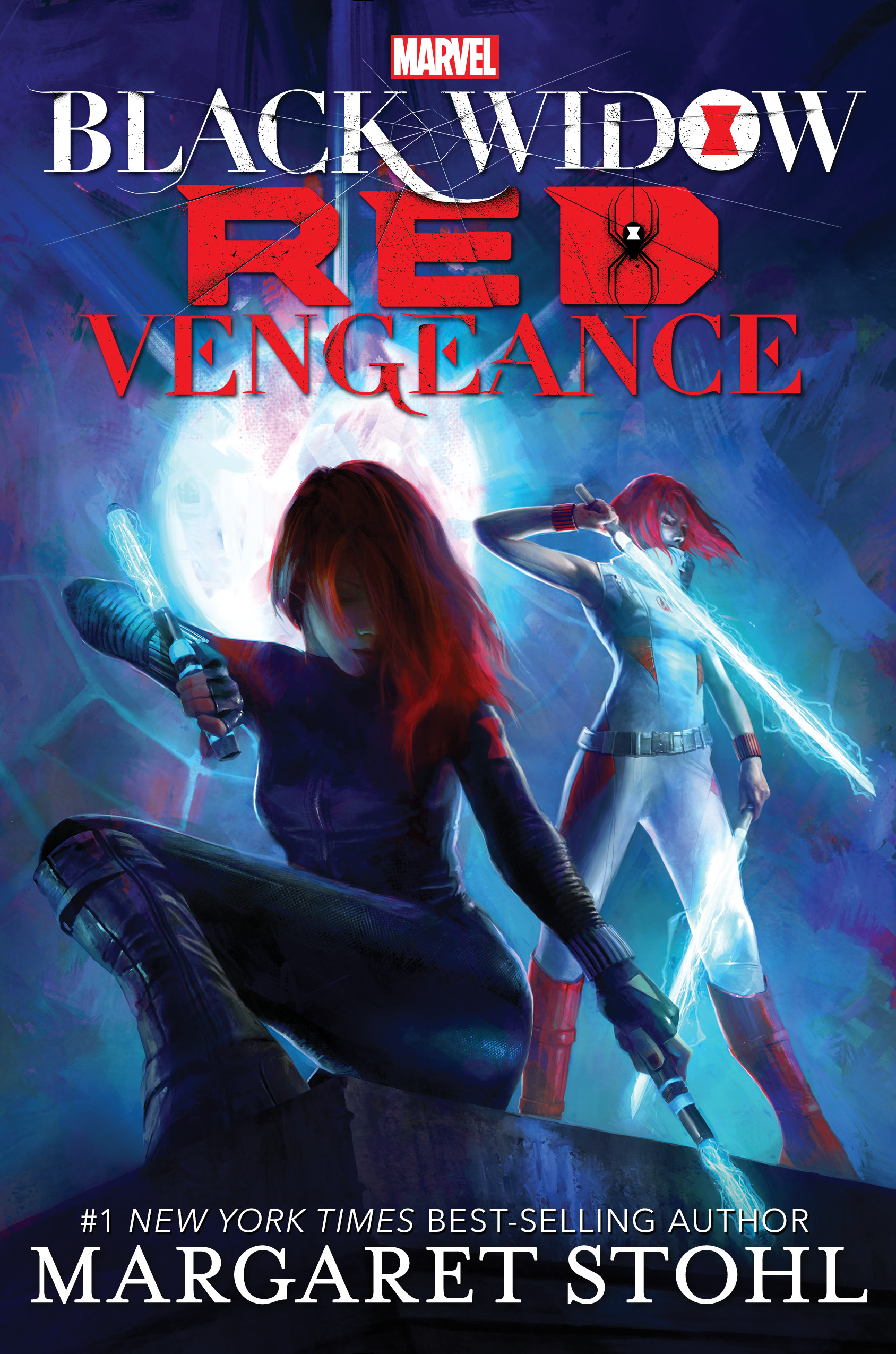 Mary Suevians, we’ve got a giveaway prize pack that’s right up your alley. To celebrate last week’s release of Black Widow: Red Vengeance, we’re giving away a copy of the new book, as well as Black Widow: Forever Red to catch you up in case you’re behind on your reading!

We greatly enjoyed Margaret Stohl’s Forever Red, and we’re super excited to finally have our hands on her sequel and give you all the chance to say the same. Our prize pack (prizes and samples courtesy of Marvel Press) includes:

All you need to win is a U.S. address and a Twitter account (following The Mary Sue so we can DM in the event that you win), which you’ll use to tweet the following anytime this week (one entry per contestant):

We’ll round up the Twitter handles of everyone who tweets and select a winner at random. Happy tweeting! Here’s an excerpt to get you in the winning mood:

Nothing like the Christmas tree at Rockefeller Center, thought Natasha Romanoff— for terrorists, crackpots, and basic criminal scumbags. As always, there were no visions of sugarplums dancing in the Black Widow’s cold red head. The S.H.I.E.L.D. agent glanced up at the green-needled monolith—dusted with snowflakes and twinkling with lights and Swarovski crystals, the centerpiece of Manhattan’s annual holiday party—and thought two words.

Natasha knew that the famed Rockefeller Center tree was larger-than-life in a score of dangerously useful ways. Symbolic significance? Check. Media coverage? Check, check. Mass casualties? Check, check, check. She sighed and touched her earpiece. “Black to base. No sign of their Alpha.”

“Copy that, but don’t park your sleigh just yet, Black.” Coulson’s voice crackled into her ear as she moved through the crowd. “And check in with Red. We’ve lost her signal.”

“Copy that, base. Black out.” She kept moving.

A sea of raised arms, all holding cell-phone cameras, now saluted the hundred-foot Norway spruce from every side, as if the yuletide monstrosity had crash-landed on some worshipful alien planet and assumed the role of supreme leader. Yeah, a planet of sardines, more than a million a day, all packed squirming into one snowy city block, Natasha thought.

And for what? To see a freaking plant.

It was a stormy Saturday afternoon in December, a bad time both for crowds and weather, which meant these were die-hard tree people—Natasha just hoped not literally.

The potential for disaster was staggering. Eyes up, defenses down—not one dazed worshiper was looking anywhere but the supersized tree—even though there was an entire holiday parade moving down Fifth Avenue at the far edge of the block.

Ever since the yuletide crowd had begun to surge and climb over the sludge-banked metal barricades at the edges of Rockefeller Center plaza—the corner of Fifty-Ninth and Fifth—the NYPD had given up. Now they just cursed the cold afternoon, waiting out the end of their shifts on the safe side of the roadblocks, their breath curling upward in raggedy white puffs. And they’re strictly donut patrol, not top command. That had probably been a factor in the strategic acquisition of this target, she thought. Human gridlock with only Paul Blart on your tail—

All she got back was static.

That’s not a good sound—

“Hey, happy holidays,” said a harried-looking mom in a cheery red fleece, pushing a stroller zippered in plastic up the curb next to Natasha. “Great snowsuit–“

Natasha nodded, eyeing the kid as the patch of red disappeared into the snowflaked crowd. Don’t get distracted, Romanoff. Do your job and maybe this time nobody gets hurt. She hitched her pack higher, pushing on toward Fifth Avenue.

The odds were good that this op was going to end in casualties—and that, soon enough, the red in the snow wasn’t going to be fleece. Natasha’s hooded “snowsuit” was a CBRN (Chemical Biological Radiological Nuclear) state-of-the-art mop suit that only resembled snow gear; really, it was lined with filtering charcoal and striped with M-9 detection paper so she could gauge what was being thrown at her in any given hot zone. And the goggles around her neck weren’t for skiing but surviving—a mouth guard flipped down from inside, like a collapsible gas mask. (Dire biological functions aside, the whole getup also lowered the odds that one of the Black Widow’s many superfans would recognize her infamous red hair. Oh, the price of super hero superstardom..)

But it was the contents of her rucksack that really set her apart. Her requisition S.H.I.E.L.D. ruck held an M183 demolition charge assembly with enough C-4 (sixteen charges in all) to flatten a city block, if that’s what it came to.

Unlike the rest of Manhattan, Natasha Romanoff hadn’t come for the tree. She was there to take out the unknown number of hostiles who were plotting to use Rockefeller Center as holiday bait for civilian casualties. Her alpha priority was their leader, who had threatened to launch the largest and most sophisticated chemical-weapons attack in the nation’s history.

When it hit, the Northeast Megalopolis, the Boston-Washington corridor that was home to more than fifty million people, would be flooded with aerosolized chemical particulates. The invisible, odorless microbes would seize control of human neurons and eventually destroy them—unless Natasha could destroy the as-yet-unidentified dispersal devise before the Alpha triggered it, somewhere on this street, sometime on this day, at some point during this parade.

This wasn’t the first time she had carried a satchel charge through the streets of a populated area; off the top of her head, there had been Pristina and Grozny and Sana’s and Djibouti and Bogotá before now. She had infiltrated Serbian revolutionaries and Chechen guerillas and Yemeni pirates and Somali armed forces and Columbian mercenaries—but then, they had already known they were at war. It didn’t make the ops any less devastating, only less of a surprise; those buildings had long been riddled by bullets, roads ravaged from IEDs, walls chiseled with rat holes for hostiles at every turn. Those cities had become operational theaters way before she’d gotten the call; everyone who could leave had already left.

At least, that was how Natasha had rationalized it to herself.

This, on the other hand, was midtown Manhattan. This was a holiday attack perpetuated on American soil in the clear light of day during prime traffic for the highest-density urban population in the country. It was the sort of bad business only attempted by the depraved coalition of psychopaths grasping for global attention—because it worked. Every lethal move the opposition made brought them closer to achieving the desired result, to producing the headlines—the worst! the deadliest! the bloodiest!—that could shape or rule an era and force a country to its knees.

Not if someone stops them first.

She checked her watch.

Come on, Ava. Where are you?

They didn’t have this kind of time to waste. For the next two hours, the parade would still be going, and Rockefeller Center would still be jammed with civilians. The timing wasn’t an accident. Pearl Harbor was hit at 7:53 a.m.; the first of the Twin Towers was 8:45 a.m. If the attack succeeded, today would be worse by an order of magnitude.

From where Natasha stood, she knew she could shake up a Coke and spray fifty people without so much as tossing it. If she had to use it, the effect of a single stick of C-4 in a place like this, on a day like this, at a time like this, would be unimaginable. If she didn’t use it, the number of people affected by the chemical attack would probably be worse. There was no easy answer, and there never had been.

Twenty-eight years of peace. She’d read it in one of Ava’s S.H.I.E.L.D. Academy assignments, citing a journalist named Chris Hedges.

That’s all the quiet this planet has ever known, since the beginning of recorded history. How can one person change that?

Even if that one person happened to be the Black Widow.

But it’s not just you; there are two of you now, she scolded herself. I don’t know why you keep forgetting that. Red and Black, remember? You don’t always have to be so alone, Natashkava—

“Natashkava!” She heard Ava’s voice while her back was still turned. “I found the Alpha. Right around the corner. There’s just one thing—“

Natasha heard it in Ava’s voice before she saw it. The flinty hardness, the push of adrenaline that inflected every syllable.

Her hand went immediately to the back of her waistband.

Now the voice was louder, harsher. “Touch one hair on that Alpha’s head and I’ll shoot,” Ava said. “And I mean it.”

“I know,” Natasha said, raising her hands in surrender. And as she slowly turned to face all that remained of her family, she also found herself staring down the barrel of her own Glock revolver.